The Courageous Attract Luck and Disciples to Their Cause

It was an early morning on the first day of spring. 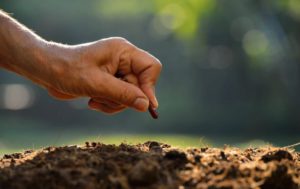 The farmer had just finished planting the last of his sunflower seeds.

The ground was still cold and hard from a long, cold winter.

“Is it time? Is it time?” an anxious sunflower seed called out to his brothers and sisters.

Thousands of sunflower seeds buried just beneath the earth echoed the refrain.

The next day the anxious sunflower seed called out again, “is it time?”.

Day after day, the anxious sunflower seed called out to his brothers and sisters and each time their answer was always the same.

After many days had passed, the anxious sunflower seed grew ever more impatient, pleading with her brothers and sisters to rise up from the ground.

They were too afraid.

“Wait until next month.”

One after another, the sunflower seeds voiced their fears, admonishing the anxious sunflower to stay put and not venture outside her shell.

But she grew tired of hearing their admonitions. 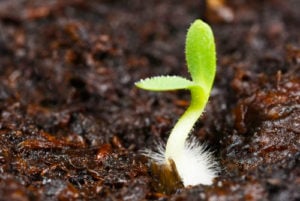 Her impatience could no longer be contained and with one mighty kick, she cracked open her shell and began climbing as fast as she could until she broke through the ground.

The sun was bright and warm.

She felt herself growing, stretching, one leaf arm after another bursting out from her body and towards the nurturing sun.

All throughout the day, she looked about, hoping to see just one of her brothers and sisters.

But none emerged from their shells.

The sun remained warm and bright over the next few days.

She continued her ascent upwards.

Her leaf arms growing bigger by the minute, her body expanding, growing thicker and thicker, taller and taller.

She felt strong and alive.

Still not one of her brothers and sisters dared to venture out of their shells.

“Why don’t they join me,” she wondered.

“Why are they so afraid?”

The sunflower continued to grow each day, all alone.

Although her days and nights were lonely, she didn’t mind.

She was growing and alive and it felt good and made her happy.

It would be several weeks after she began her journey before she experienced her first brush with the cold.

The anxious sunflower had heard her brothers and sisters talk endlessly about the cold.

Now it was all around her.

Enveloping her like a frosty blanket, waking her from a deep slumber.

She wrapped her largest leaf arms around her body, in an effort to insulate herself from the biting cold, carried by the fierce wind.

The night seemed to last forever.

The pain of the cold coursed through her entire body.

She felt herself growing weaker and weaker until she lost consciousness.

The sun’s rays roused her from her deathly sleep.

The rays were warm and felt welcoming. 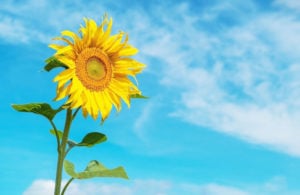 As soon as she felt the last of the ice melt away, she raised her two mighty leaf arms skyward, catching every ray of sunlight she could.

Her other smaller arms, once freed, also reached up towards the sun.

Within moments she could feel her strength return.

The sunflower knew that she was fortunate to have survived the night and that she might not be so lucky the next time.

She realized from her near brush with death that if she were to survive she would need to work much harder to grow.

If the next cold spell was worse than the last one, she might not survive at her current size.

So, she immediately went to work stretching and growing non-stop, all day long, without any breaks.

The sunflower continued her hard growing work each day.

After the third day of hard growing she had grown to twice her previous size and had many more leaf arms to capture the sun’s rays.

One night, the sunflower was awakened by something cold, wet, and white.

“What is this?” she asked herself, panicked and afraid.

The cold, wet whiteness was falling from the sky.

As the night wore on, the cold, wet whiteness came down harder and harder. 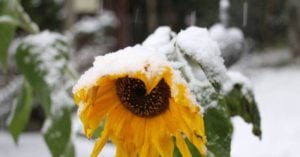 It was rising up all around her, climbing up her body.

The sunflower did not panic.

She had prepared for this by growing every day.

Before the cold, wet whiteness completely covered her, she took four of her largest leaf arms and wrapped them snugly around her entire body.

For a moment, she felt as if she were back in her shell.

But, she knew her leaf arms were not as strong as the shell that protected her as a seedling.

She knew her arms might not survive, sacrificed to the cold, wet, whiteness.

The sunflower hoped against hope that her body and the smaller leaf arms would survive the night.

The farmer had been intrigued by the lone sunflower.

As he tended to his farm each day, he came to admire the sunflower’s courage.

He did not think the sunflower would survive, but somehow it did.

In fact, it seemed to burst to life after the frosty night nearly took its life only a few days before.

Now, this courageous sunflower was once again under assault.

A blizzard, no less.

But rare or not, his sunflower was now in a life-and-death battle.

The sunflower reminded him about how hard life could be.

He remembered all of the people who had helped him during that year his crops failed.

Without their help, he would have lost the farm. 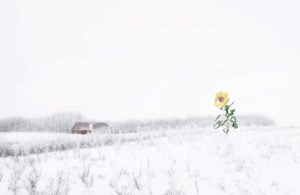 So, the farmer decided to lend a hand to his courageous sunflower.

In the middle of the night, he cleared away the snow around the sunflower.

He did not know if it was still alive.

It had wrapped its large leaf arms around itself and there was no way of knowing if underneath those frozen leaf arms were life.

After clearing the snow, he tied the sunflower to a tall, sturdy stake.

He added three equally tall, sturdy stakes, forming a circle around the sunflower.

Then the farmer covered the stakes with a thick tarp, which he tied tightly to the stakes, forming a roof shaped like a pyramid.

The blizzard ended at daybreak. The sun began to filter through the rapidly dispersing clouds.

The farmer made his way to his farm to see how his courageous sunflower was doing.

He cleared away the tarp and removed the stakes.

The sunflower collapsed once it was removed from the stake.

Four of its leaf arms fell to the ground.

The farmer sadly shook his head.

“I tried my courageous sunflower. I tried.”

The farmer left his sunflower and headed back home.

“Not much work would get done this day except digging out,” he said to himself.

The blizzard was immediately followed by a warm front that brought much sunshine and significantly warmer weather, which lasted for several weeks.

The snow melted after a few days.

This turned out to be a very lucky break for the sunflower, who was one cold day away from certain death.

But that cold day never came. 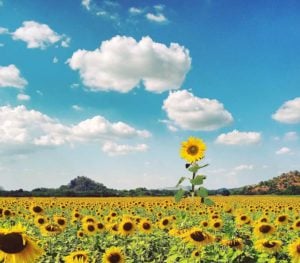 Instead, only warm days filled with life-giving sunshine and an abundance of water, enabling the sunflower to flourish.

By the time the last of the snow melted, the sunflower stood nearly three feet tall.

All the farmer could do was shake his head and marvel at the resilience of the courageous sunflower.

Not long after the snows had melted, other sunflowers broke out of their shells and made the journey skyward.

The courageous sunflower was no longer alone now.

She was soon surrounded by thousands upon thousands of her brothers and sisters, all competing for precious space in which to grow.

Each new arrival marveled at the majesty of the courageous sunflower, who towered over them.

Some of the late arrivals never stood a chance, their access to the sun and precious nutrients in the soil, monopolized by those who arrived sooner.

Thanks to the courageous sunflower, the farmer’s business were booming.

Thousands upon thousands came from hundreds of miles away.

Media scurried to take pictures and customers, families, schools, all happy to pay $5 per person to see the Guinness World Record-holding sunflower.

The sunflower beamed with pride as the farmer stroked its stalk, sharing with the visitors, the story of his courageous sunflower. 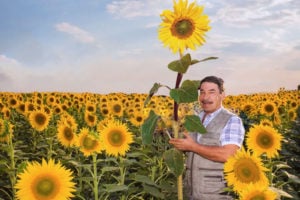 “She was the first out of the ground by three weeks.

She came close to death twice and survived.

How she survived the first time, I do not know.

Luck in the form of good weather and my farming skills saved her the second time from a spring blizzard and near-certain death.

She is the luckiest and most courageous sunflower I have ever grown.

And her seeds will never be sold.

I will nurture them and protect them.

I will grow many more sunflowers from her seeds, until one day my entire farm will be filled with courageous sunflowers.”

The crowd applauded, the farmer smiled and the courageous sunflower stood tall for all to see.