In his column in Switzer, John McGrath discusses the recent slowdown in Sydney’s price growth, but says the clearance rate remains positive.

The Sydney market has certainly slowed down a bit this year in terms of price growth, but the city’s Saturday auction clearance rates have been consistently high – ab

The highest clearance rates so far were recorded over back-to-back weekends in May at 80.3% from 505 properties and 77.6% from 573 properties, according to Domain Group.

Clearance rates are an important indicator of what’s going on in the market.

Unlike many other statistics that have a lag time before publication, clearance rates tell us what’s happening week to week, so they’re a great yardstick for supply and demand.

One of the factors keeping Sydney’s clearance rates strong right now is a lack of supply.

This time last year around 750 homes were going to auction every weekend, so that’s about a 30% drop.

There’s plenty of people out there who have been searching for their next home or investment for many months, or even for a year or more. 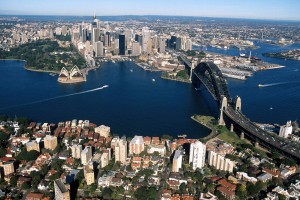 More new buyers are entering the market every week too, particularly following the surprise 0.25% interest rate cut in May and speculation of a further rate cut to come.

It’s become harder for buyers on tight budgets because property prices have grown so strongly over the past three years – and they’re continuing to grow now.

CoreLogic RP Data reports an increase of 4.5% in Sydney’s median house price from January to April; and a 4.2% increase in the apartment median.

To those buyers frustrated by high competition, I say don’t lose hope.

Conditions are settling and the frenzy has gone out of the market, it’s just that very low stock is resulting in exceptional prices.

This low supply environment will continue throughout winter and the pre-election period so there’s every reason to expect a lot more stock to come onto the market this spring, so you will have more choice then.

The other important trend in recent clearance rates is the domination of the city’s premium areas.

These areas tend to perform well in pretty much any type of market, whereas outer ring markets can experience greater highs and lows in sales activity and short-term price growth.

The top performing areas have included Sydney’s Lower North Shore, Inner West, Northern Beaches and the City and Eastern Suburbs where clearance rates have recently been in the 80% to early 90% range.

This compares with the South, South-West and Western Suburbs where clearance rates have recently been in the 60% range, according to data from Domain Group.

'Sydney’s auction clearance rates soldier on' have no comments