Due you understand the power of a sunset clause in your contract of sale for a property?

You better if you’ve bought off the plan.

A sunset clause is a contractual term designed to protect both the buyer and the seller.

However, recent reports of developers taking advantage of these clauses to make a larger profit in off the plan (OTP) properties have left buyers wary.

So what is a sunset clause?

The basic premise of a sunset clause is to put an expiry date on a contract of sale for a property. 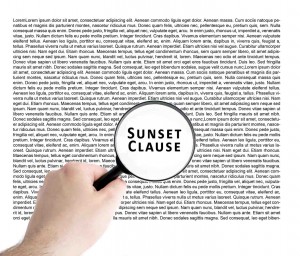 It can be used when a vendor is putting an offer on a property in order to force a decision, and hopefully commitment, out of the seller.

When buying off the plan a buyer is committing to a property that has not been built yet and there needs to be some conditions built into the contract to ensure that the project is:

At the same time, the developer or seller is protected by a sunset clause because it means that the buyer can’t back out of settlement at completion of the project, if it is completed before the sunset date.

So what’s the problem?

Recently a Sydney developer has won the right to rescind the contracts of 37 buyers after the apartments on which they signed contracts five years before more than doubled in value before the building was finished.

Thirty-four buyers took the Sydney development company Kaymet Corporation to the supreme court after it used a “sunset clawback” clause to rescind contracts signed between 2009-10 for between $370,000 and $600,000.

While originally, the sunset clause was intended to protect buyers in the event a development didn’t go ahead, letting them out of their original contracts if it was not completed by the “sunset date.”

But the clause works both ways – either side can trigger a bail-out and in this case the developer has taken the properties back and can resell them at a higher price.

In court but the buyers argued the developer had delayed completion on purpose so the date would pass and that they to make an extra $6 million based on sales at today’s prices.

But the court found for the developer saying it had not breached the terms of the contract by rescinding the contracts and refunding buyers their deposits.

These Wolli Creek buyers are not the only people who have lost properties this way in Sydney’s current property boom.

There have been many reports of other similar occurrences.

Just another reason not to buy  “off the plan.”

You may wish to read these related articles: