The number of residential vacancies remained steady across the nation in July 2015, with a vacancy rate of 2.4% posted based on 73,209 vacancies, slightly up from June when vacancies were 72,849.

Vacancies were steady in most capital cities, excluding Brisbane, Canberra, and Perth were vacancy rates continued to climb.

Hobart was the only city to record a fall in vacancies for the month.

The biggest rise was recorded in Canberra with a monthly change of 0.3 percentage points from June.

Perth soon followed with a rise of 0.2 percentage points.

Over the year, vacancy rates in Perth have continued to climb with a significant 1.3% jump from this time last year.

Year-on-year, vacancy rates are down for Hobart and to a lesser extent Melbourne, with Hobart vacancies falling 0.5 percentage points over the last year, bringing the total number of vacancies down to 324.

Melbourne experienced similar yearly falls with vacancies falling from 2.6% to 2.3%, a total fall of 0.3 percentage points.

Both falls reflect the tightening of the both residential markets post downturns.

Yearly falls have also been recorded in Perth, with asking rents down 7.4% for houses and 6.3% for units.

In contrast, Melbourne has recorded a rise of 3.0% for houses and 2.0% for units.

The Rental market is on balance slightly in favour of tenants at this point in time, though of course, each city tells its own story.

While areas exposed to the tourism market are recording a stronger rental market. 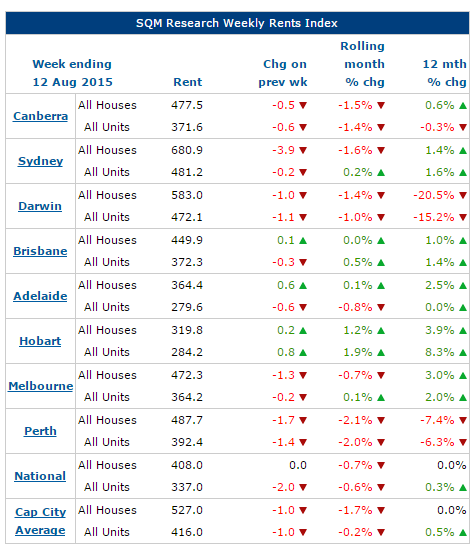 'Steady on: Vacancy Rates remain level' have no comments