The south east corner attracts seven out of ten house sales across Queensland.

All house markets across South East Queensland are in recovery.

Some areas are expected to perform better – both sales & price growth wise –than others over the next 12 months.

So what is happening with the detached house market in each of our eleven major SEQld districts?

Our first chart combines together the house sales & price results across the eleven major SEQld regions.

Since 2012, both sales & prices have increased. 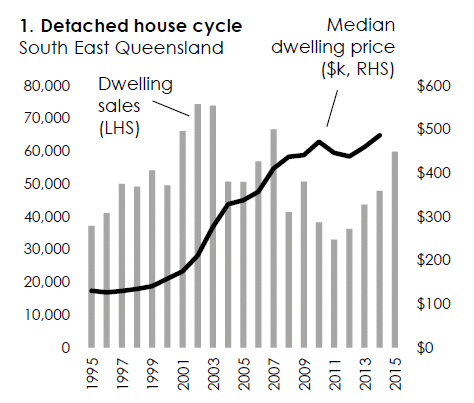 The rapid escalation in SEQld house prices took place in two stages – the first, depicted as A on chart 2, was due to several macro-factors such as lower interest rates; the introduction of the FHOG & easier access to housing finance.

Also at play were certain local conditions – the SEQ market was undersupplied; housing was undervalued (based on local income) & new high paying jobs due to resource-related construction projects.

The second stage – marked as B on chart 2 – was more bumpy, reflecting changes in local conditions such as supply & demand; changing value propositions plus the aftermath of the GFC & the winding up of Qld resource-related construction projects. 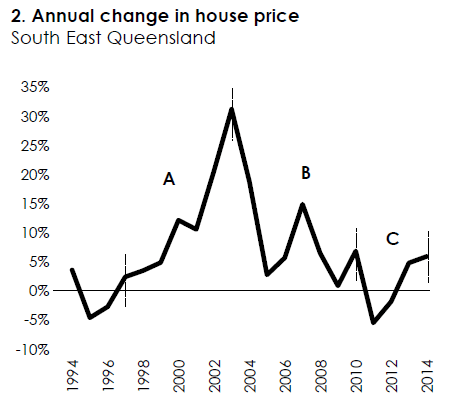 The 2011 Brisbane flood had a negative impact on SEQ property demand & values.

The subsequent downtown was harder than normally would have taken place.

SEQ current recovery is, in part, regaining lost ground, plus is being fuelled by increasing interstate & some overseas investor interest.

Locals are also active, as many can finally sell their homes for reasonable prices – something which they haven’t been able to do for some time.

It shows the average number of houses sold each year over the last decade & our estimates for house sales during 2015. All SEQld regions are expected to see higher sales volumes over the next 12 months. 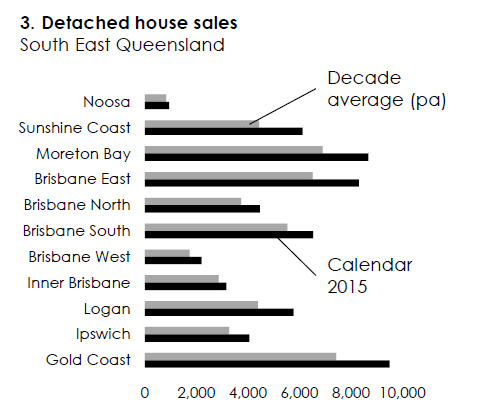 Looking back we find that, on average, house values rose just 4.1% pa across SEQld over the last decade.

Some regions outshone others & during 2014 all saw house values rise. 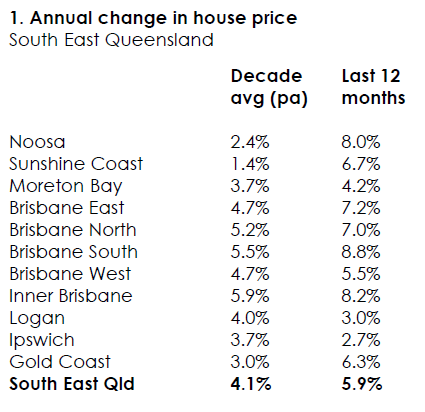 But we don’t expect boom conditions – similar to A as shown in chart 2 – this time around. A more subdued recovery/upturn is expected.

We don’t like to pick winners – it is a gamble at best – but we do think that house price growth is likely to accelerate on the Sunshine & Gold Coasts during 2015, as well as in the Moreton Bay area & across Brisbane’s western suburbs.