Data released by SQM Research this week has revealed the number of national residential rental vacancies was 71,540 homes in August 2017, giving a national vacancy rate of 2.2%, down from 2.3% in July.

The vacancy rate remained very tight at 0.4% in Hobart, down from 0.5% a month earlier, while in Sydney and Melbourne vacancies remain steady at 2.0% and 1.7%, respectively.

All other cities recorded falls in vacancies for the month.

The vacancy rate recorded in Hobart is a record low for any capital city since SQM Research commenced measuring the rental market in 2005.

Darwin recorded the sharpest decline for the month with vacancy rates falling to 2.5% (from 2.9% July).

Darwin has now recorded falling vacancy rates for seven straight months in a row, which suggests the downturn in the Darwin rental market is over.

Sydney recorded a vacancy rate of 2.0% which was largely steady from July.

There had been a rise in vacancies in Sydney over the winter months, however SQM expects this seasonal increase in vacancies to unwind during spring.

Brisbane had a vacancy rate of 3.1% for August, down from 3.3% recorded in July.

Perth continues to have the highest vacancy rate of all capital cities at 4.6%, but that result too was down for the month (4.9% July).

Overall the current rental market is a moderate landlord’s market.

There is nothing in our numbers to suggest the market is about to be hit with oversupply.

Dwelling completions should peak in early 2018 and given the pronounced year on year declines in building approvals, we believe rents will likely rise at a faster pace 2018 than what has been recorded in 2017, thus far.

We now have mounting concerns for significant rental shortages in 2019 in Sydney and Melbourne.

Unit asking rents were steady at $438 a week.

Year on year capital city asking rents are up by 2.4% four houses and 1.9% for units.

Hobart has recorded the fastest pace in rental increases (houses) with a stunning 4.2% rise over the past 30 days and a 14.5% increase for the past 12 months.

The rapid rise in rents is clearly attributed to the record low vacancy rates recorded in that city as covered earlier.

Meanwhile, Perth continue to record falls in rents with a 2.1% decline for houses and a 1.5% decline in weekly asking rents over the past 30 days.

Rents are now down 34% in Perth from their peaks recorded March 2013. 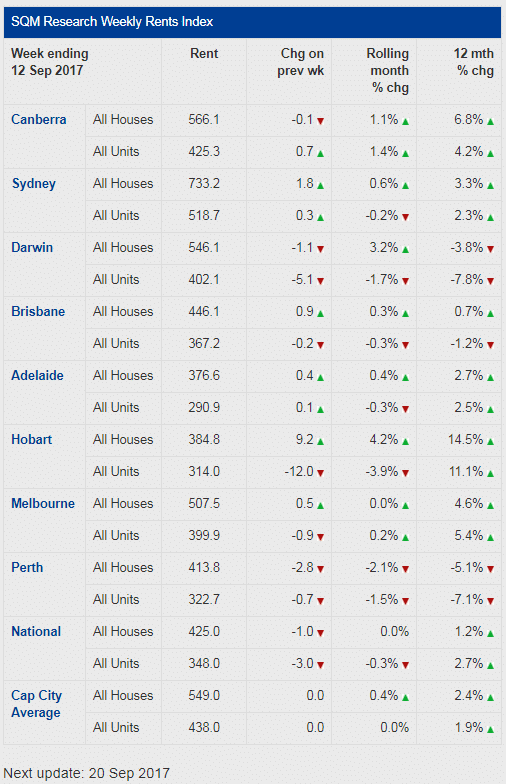 'Significant rental shortages ahead in Sydney and Melbourne' have no comments