There are a number of reasons why following the Owner Occupiers may not only be a safer bet, but also be more rewarding over the longer term.

What happens when (not if) the next financial crash or economic downturn comes along?

Owner Occupiers will rarely sell the family home, they will do almost anything to keep a roof over their families’ head, including selling a car, boat, shares or even an investment property.

If they have followed the heard to an Investor “hotspot” and price their house for a quick sale, you can bet the rest of the heard will come along and continually undercut each other in the search for liquidity.

It can then take a further 4 to 5 years for prices just to return to where they were.

Can you afford to sit on the sidelines for that long waiting for an underperforming market to bounce back?

This dramatic sell off and crash does not generally occur in stronger Owner Occupier suburbs, especially those with significant market depth.

You will usually see a moderate drop (if anything) for a short period as owner occupiers weather the storm and hold onto their homes.

A location with a higher owner occupier percentage is there for a must to protect your capital and lower the risks.

A certain type of owner occupier

Once you have selected a location with a higher owner occupier percentage, the next step is to analyse the demographic in more detail to ensure they are a higher income earning demographic.

I use SQM Research to do this and here is what I am looking for; 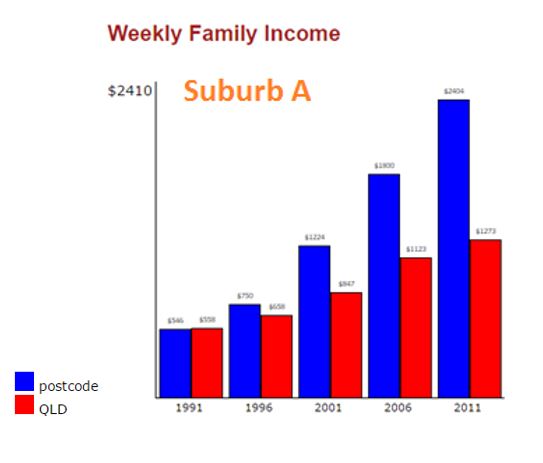 What I am looking for here is wage growth.

Back in 1991, this postcodes average income was marginally lower than the rest of Queensland, but look at what has occurred in the decades that followed.

It is now approaching double the rest of Queensland and does not look like slowing down.

Contrast with the suburb below, things have barely changed in two decades.

Incomes have only just kept up with Inflation and CPI; 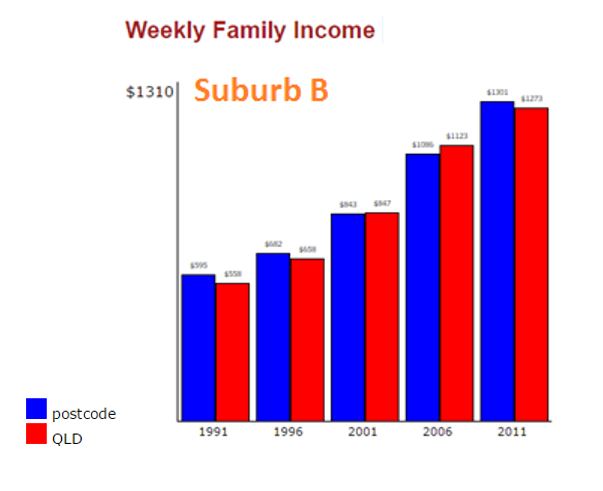 With Suburb A, where wages are increasingly rising, we see some common trends and traits when it comes to property. 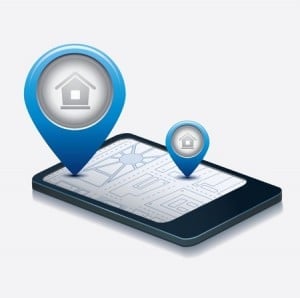 They generally have a higher disposable income and are willing to (and able to) pay more for the right kind of property.

This is none more evident than if you have attended an Auction in a strong owner occupier suburb with a high income earning demographic.

The investor falls out early in the piece and it is left to two or three owner occupiers to fight it out to the end, with the property eventually selling well above reserve or what is considered fair market value.

Another trend we see, after the property sells for a record price, it is not uncommon 12 months later to see the existing house demolished and replaced with a huge, modern contemporary home.

Clearly, the higher income owners have got emotional and overcapitalised.

It doesn’t matter where we are in a property cycle, if one day a house sells for say $800,000 and 12 months later it is replaced with a new build and is now worth $1.5 million.

There will be upward pressure on prices – especially if that is occurring 3 or 4 times in the same street.

There are also certain trends we see with Suburb B, but they are vastly different from Suburb A.

Firstly, this demographic generally live a pay check to pay check existence and do not have the disposable income to get emotional and pay significantly more for a dream home or location.

They are often looking for a bargain or a heavily discounted property and they don’t have the ability for major improvements on the family home.

Funnily enough, this is also the mindset of the average property investor, which is why they are sometimes drawn to these locations.

They are also usually in secondary locations, away from employment hubs and infrastructure where land value is significantly less as demand is much lower.

As a result, there is just not that continual pressure to force prices up either.

Not only will an owner occupier location be a lower risk investment it could also have significantly higher upside over the longer term and create greater wealth.

Brett Warren is Director of Metropole Properties Brisbane and uses his two decades of property investment experience to advise clients how to grow, protect and pass on their build their wealth through property. Visit: Metropole Brisbane

'Should I invest with other Investors or Invest where Owner Occupiers buy?' have no comments