Each Saturday morning I like to share some of the interesting property investment and economic articles I’ve read during the week.

I’ve put them here all in the one place for your easy reading.

Enjoy your weekend….and please forward to your friends by clicking a social link buttons on the left.

Dr. Andrew Wilson, the senior economist at Australian Property Monitors, gives his insights on what is happening in Australia’s capital city markets in an article in Domain.

In short he says:

Sydney
There’s growing confidence in the Sydney market. “There’s still some quiet areas but I think the prospects for spring are quite optimistic from vendors.”.

The action is mostly in the middle part of the market rather than the top end – although there are early signs of a rise in activity for pricier properties, particularly in the eastern suburbs and lower north shore, says Wilson.

“Leading indicators are quite positive and particularly compared to last spring where the market really did run out of puff.  Of course, the key disclaimer to all of this is how the economy is performing and we’ve just started to see some more positive signs from the economy as well.”

Melbourne
Melbourne has been a little surprising this year performing better than expected, says Wilson.

“Melbourne really leapt ahead back in that boom period we had in 2009 into 2010,” Wilson says. “Certainly that was unsustainable and [there has been] a correction process.”

But the jury is still out on how the Melbourne market will do over the remainder of the year.

“We may see a little bit of that middle market pick up through to the end of the year as a result of people who have sold their properties to first home buyers,” says Wilson.

On the whole though, Wilson is expecting the Melbourne market to remain subdued.

Brisbane
Despite a solid lift in home loans and investor activity in Queensland, Australian Property Monitors is not seeing any sense of a liftoff the bottom of the market.

Adelaide
Adelaide is quite flat at the moment, says Wilson.  “There’s a real wait-and-see attitude amongst buyers and sellers in the Adelaide market,” he says.

“I would suggest that it would still remain quite flat over the remainder of the year with, if anything, some slight upside in terms of prices growth and increased buyer activity.”

“All the fundamentals are certainly pointing to prices growth. Western Australia has Australia’s strongest economy, lowest unemployment rate and highest wages.  We’re seeing significant rises in rents for both units and houses in the Perth market, a shortage of accommodation and high competition for properties in both the selling and renting markets.”

Strong population growth and low levels of construction are at play.

Canberra
The Canberra market is up and running, says Wilson.

Canberra has low unemployment, relatively high public service incomes and a shortage of accommodation, especially at the cheaper end of the market.

“First home buyers find it very hard to get into the marketplace in Canberra, and it is certainly, in terms of prices growth, looking very, very solid at the moment.

“It has a very seasonal employment profile because of the dry and the wet season there, so you tend to get a lot of interstate migration as the wet season moves into the dry season and vice-versa.”

The underlying trend in Darwin is increased activity in the resources sector, especially offshore resources, says Wilson. “We’ll see quite an active market through to spring in Darwin,” he says.

Hobart
Despite a weaker economy that lacks exposure to the mainland’s resources boom, Wilson says the Hobart housing market has shown some resilience.

How to beat the auctioneer and buy well at auction

Another great Property Uncut show produced by Kevin Turner. If you don’t already subscribe to this excellent weekly Internet based radio show.

This week he has a heap of great guests:

This mining boom will end in the next year or two, but there will be another

AMP Capital Chief Economist Shane Oliver discusses the concerns many have about the end of the mining boom in his latest market commentary. He says…

The past week has brought much debate and consternation in Australia as to whether the mining boom that has supposedly propelled the economy for the last decade is over. This followed the cancellation or delay of various resource investment projects, including the massive Olympic Dam expansion and a fall in commodity prices over the last year.

But is it really over?

And would it really be the disaster for Australia that many fear?

After all, we have had years of hearing about the two-speed economy where the less resource-rich south-eastern states were being left behind, and it was said that the people of western Sydney were paying the price (via higher than otherwise interest rates and job losses) for the boom in Western Australia, so many Australians might be forgiven for thinking good riddance.

Oliver explains that much of the debate about whether the mining boom is over has been characterised by confusion as to what is being referred to, with some focusing on commodity prices, others on mining investment projects and others saying that technically it hasn’t even begun until mining and energy exports pick up. In broad terms the mining boom that has gripped Australia for the last decade likely has three stages.

In this commentary he explains that there are a number of stages of the mining boom, and while we’re moving out of the initial stages of the boom where infrastructure is being built 1, this will lead to the next phase where we export our resources and have a more balanced economy.

AFTER years of dizzying ascents, a big dose of gravity has hit residential-property markets around the world.

According to The Economist‘s latest round-up, year-on-year prices are now falling in 12 of the 21 countries we track; in five of the other nine, prices are rising at a slower rate than they were a year ago.

The woes of European and American housing markets are very familiar; once-frothy Asian markets are also now subdued. Prices in Hong Kong are rising at a manageable 6% a year, as opposed to 28% a year just 12 months ago. Chinese prices fell year-on-year for the fifth month in a row in June. Indeed, so subdued is residential property at the moment that the list of the world’s bounciest markets has an unusually Germanic flavour, with Austria, Switzerland and Germany all posting appreciable gains. 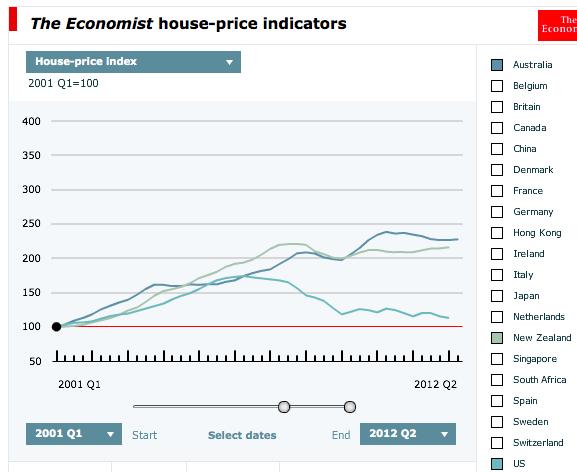 The Economist has been publishing data on global house prices since 2002.

The interactive tool above (you need to go to the website to play with this) enables you to compare nominal and real house prices across 20 markets over time.

If you’ve been following my blogs you’ll know I don’t necessarily agree with the Economist’s assessment of Australian property – they’ve been predicting a bubble that’s going to burst for years – but the graph is cool and worth fiddling with.

Read more and play with the interactive graph here…

If you’re a Warren Buffet fan, and I am you’ll enjoy this article in Motley Fool that gives you 82 reasons to Love Warren Buffet, who by the way, just celebrated his 82nd birthday.

Read the rest of the 82 reasons by clicking here…