Each Saturday morning I like to share some of the interesting property investment and economic articles I’ve read during the week.

I’ve put them here all in the one place for your easy reading.

Enjoy your weekend….and please forward to your friends by clicking a social link buttons on the left.

And he concluded that with the tourism sector remaining weak, some excess supply in select regions still needing to be absorbed and no sign of a return of the “sea-changers”, these markets are broadly expected to continue to underperform over the coming year.

To put things into perspective, Australia’s population is highly centralised with 64.1% of all residents living within a capital city.

Despite a preference for capital city living there are many key regional areas across the country that are home to a significant population.

In fact the 10 largest regional housing markets account for 16.2% of the national population and every one of these regions has a greater population than that of Hobart (216,656) and Darwin (128,073).

In fact, the Hunter, Gold Coast, Illawarra and Sunshine Coast regions are respectively the 6th, 7th, 8th and 10th most populous regions of the country.

It is also no surprise that all of the most populous regional areas of the country adjoin the coastline and all except for the south-west region in Western Australia are located on the country’s eastern seaboard.

Given that all of these regions are coastal, many have experienced relatively weaker housing market conditions over recent years.

There are two main reasons for these conditions: firstly, the downturn in the tourism sector brought on by the higher Australian dollar and the global financial crisis (GFC) and, secondly, the slowdown of migration to these areas, known as ‘sea-change’, which was so prevalent in many of these areas before the GFC. 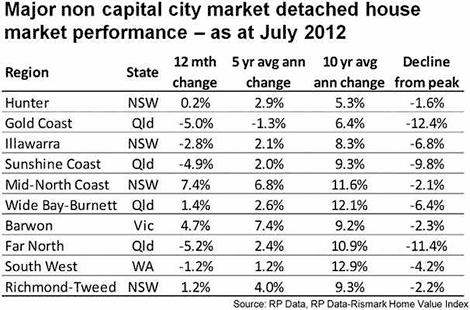 Read the rest of this article here…

Baby Boomers are like a tennis ball in a garden hose

Another great Property Uncut show produced by Kevin Turner. If you don’t already subscribe to this excellent weekly Internet based radio show.

This week he has a heap of great guests:

Aussie consumers pat yourselves on the back – you’ve mastered the plastic fantastic.

And we are also smarter with our use of debit cards. Rather than getting cash out at the ATM, we are taking cash out when we go shopping for other things. Withdrawals at ATM are lower than a year ago while cash-out only debit card transactions are up almost 33 per cent on a year ago.

Why would this really matter to you and me as property investors?

The Reserve Bank releases data on credit and debit card transactions each month. The credit card figures are useful in highlighting consumer borrowing and spending trends.

The current stats give the Reserve Bank can more confidence about cutting rates in the knowledge it won’t lead to a spending boom as the attitude of Aussie consumers has changed.

Video of the week – No Australian housing crash, but market could stagnate for a decade: Residex’s John Edwards

John Edwards gives the latest update on the Australian real estate markets in this video .

Edwards says Australia’s housing market is not heading for a crash but could undergo a decade-long period of stagnation with house prices declining in real terms,.

Speaking to Peter Switzer he said a stagnation in house prices was likely if “things continue to the way they are going and the government and RBA do not do the things they need to do” to stimulate a recovery.

“In real terms they are likely to fall marginally over the next decade,” Edwards said. “A little pessimistic, I know,” he added.

According to Edwards, long-term stagnation only occurs during very severe recessionary or depressionary periods. However, he said given what was happening in Europe and other parts of the world there could be a global crisis.

“We have one now, but it could get worse.” Locally, he says the key factor is the unemployment rate.

But he tempered these comments by saying that even in periods when things go badly, property tended to do better than other asset classes.

“The stock market is much more volatile – and you see something [like a crash] much more often.

“Housing remains the best in terms of investment and the lowest and safest risk option.”

John McGrath CEO of McGrath real estate recently gave his views on the state of the Brisbane property market.

He said:  With the price of a residential unit in Brisbane currently at a very affordable $400,000 and the average house price in South East Queensland expected to hit $1 million by 2018, there is no doubt that the Brisbane property market is well positioned for a new cycle of growth.

You’ve heard from me before how critical population growth is to property prices in a country as undersupplied as Australia.

More than a quarter of Australia’s population growth over the next 25 years is expected to be in the region from Noosa to Coolangatta and this growth will push Brisbane ahead of Melbourne as the country’s second biggest city.

What do you think that will do to property prices?

In short, there’s exciting times ahead in the Sunshine State….

But we’re of the view that the worst is behind us and the recovery is underway. The first sign was seeing Queensland property prices improve for the first time in 18 months in the March quarter. We’ve also seen an increase in homeowners’ equity, with the average home loan in Queensland at $346,883 in May, representing 66 per cent of property values compared to 87 per cent in the final quarter of 2011.

Now that McGrath is “on the ground” and operational in Brisbane, we’re seeing first-hand the key market trends. These include:

Rising desire for inner city living. This is a new mentality among Brisbane locals. As the population grows and more professionals use public transport to get to work, more people are wanting to live in that inner ring for convenience and lifestyle

Shift to apartment living – Brisbane is scheduled to have 7,600 new apartments by the end of the year

Boomers move to town – Part of the shift to apartment living, many Brisbane baby boomers are moving from family home suburbia to low maintenance inner city apartments and townhouses within walking distance of the local café village

Buyers are looking for renovation opportunities, with the two most common reno jobs in the inner city being restorations of Queenslanders and sprucing up 1970s apartments. Ashgrove is a particular hotspot with more reno work occurring there than anywhere else over the past two years

More than 50 million Americans are short of food

I was shocked when I read a report on CNN that more than 50 million Americans couldn’t afford to buy food at some point in 2011.

Apparently children in some 3.9 million USA households suffered from food insecurity last year, with their families unable to provide them with adequate, nutritious food at times.

Nearly 17 million Americans suffered from “very low food security,” meaning they had to reduce the amount they ate, saying the food they bought did not last and they didn’t have the funds to buy more. They typically found themselves in this situation a few days a month for seven months of the year.

The number of people in this category shot up by more than 800,000 from 2010, according to a U.S. Department of Agriculture report released Wednesday. Women living alone, black households and the poor and near-poor were affected the most.

I was stunned to read that they were giving out food stamps in the USA. Apparently a record 46.7 million people received food stamps in June. However only 57% of food insecure households said they participate in a federal food and nutrition assistance program.

Let’s not forget how lucky we are living in Australia