Residential capital growth rates for May were lower than expected, with numbers dropping in many capital cities.

In many areas, both houses and units experienced negative growth rates for the month.

House values in Melbourne entered negative territory for May, falling 0.03%, however this market has recorded 9.45% growth in the past 12 months.

The largest growth rate for houses was seen in Country Western Australia (2.38%), which contrasts strongly with Perth, which experienced the worst growth rate nationally with values falling by 1.90% in May.

For units, the highest growth was in the Northern Territory (1.53%) while unit values fell by 2.73% in Country Tasmania.

Slower growth rates would be beneficial for the economy overall, as the data signals that the market is moving away from a potentially dangerous boom.

With any luck, the statistics will continue on this new trend of lower rates of growth over the next few months.

Housing markets, particularly Sydney, were moving to a “boom” like performance.

This was dangerous and could have led to a “bubble” and a severe correction if it continued. The slowing of the market at this point in time suggests that we are going to avoid this outcome.

Having said this, the Sydney market is still overvalued and in reality too expensive.

The data from May is not sufficient on its own to confirm that this lower rate of growth is about to be a new feature, but my best guess is that this will in fact be the case.”

The data indicates that the Sydney unit market has passed its peak, with growth of 2.81% for the quarter ending May.

However, it is not as clear that the house and land market has arrived at the same position.

The Sydney house and land assets are more often traded via the auction market and hence clearance rates are potentially a lead indicator for this sector.

In recent weeks, auction clearance rates in Sydney have been softer – our calculations indicate that the Sydney clearance rate was 68% for the week ending 14 June. This figure suggests a market that is now slowing. 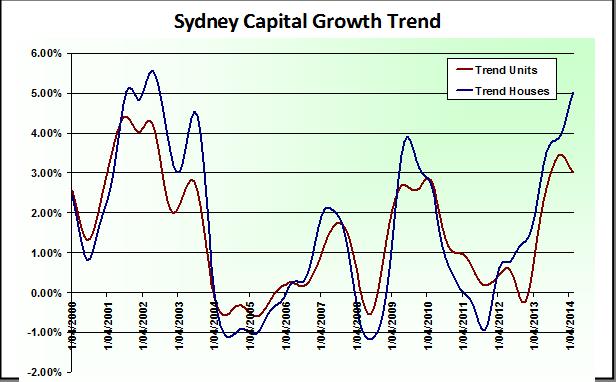