Apartments purchased off-the-plan at the beginning of Brisbane’s unit-construction boom are selling at significant losses, underscoring concerns from the Reserve Bank about the city’s concentrated inner-city property market. 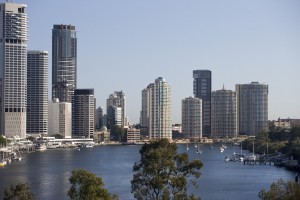 “This comes after an unprecedented building boom over the last five years, which created a massive oversupply of high-rise apartments,” he said.

“It seems that price drops of 20 to 25 per cent are not uncommon for resales after off-the-plan purchases.”

“And things are not going to improve any time soon: Just look at the skyline and you’ll still see cranes everywhere.”

More than 5,300 apartments have been completed in the inner-city of Brisbane this year, and another 11,000 are being built.

“If all the building contracts are fulfilled, new supply across the city for apartments and townhouses could grow to 15,650 over the next 12 months and 39,420 over the next two years,” Yardney added.

“But this is unlikely with the current oversupply as some new projects will be deferred.”

Across Brisbane, the preliminary auction clearance rate was 51.5% last week, according to CoreLogic.

This was slightly up compared to the same period last year.

For the Gold Coast, last week’s clearance rate was 37.5%.

Andrew Coronis, managing director of Coronis real estate agencies, said price drops of 20% to 25% were not uncommon for resales after off-the-plan purchases.

“It is just time to sit and ride it out if you can,” he told The Australian.

“If rents drop a bit the yields still aren’t too bad. If you do have to sell, it’s better to do it now. I don’t believe it will get better in the short term.”

Coronis said he was bullish about the long-term market, noting that population and jobs growth across the region would propel the market.

He also pointed to the relatively strong yields based on the median unit price: $410,000 in Brisbane.

The current glut of apartments is causing anxious Brisbane landlords to resort to desperate measures to secure tenants, according to Yardney.

“Typically they’ll offer at least a month’s free rent to incentivise a tenant to take a 12-month lease,” he said.

“Other landlords are even offering an iPad, a free gym membership or a gift voucher to secure tenants. One large Fortitude Valley developer was recently offering three months free rent and $1,000 cash to tenants who took 12-month leases.”

'Reselling Brisbane Apartments Means Selling At A Loss' have 1 comment