Sydney’s northern beaches recorded a strong rise of 8.3 percent in median weekly asking rents over the quarter to $950. 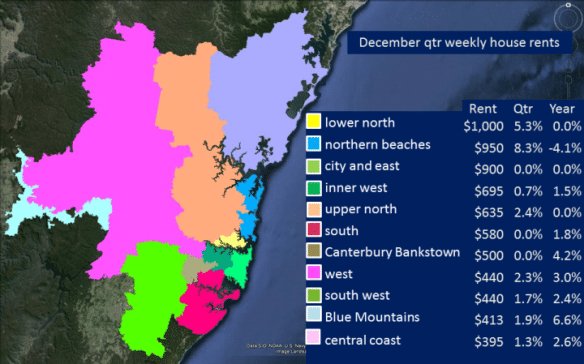 The lower north remains the most expensive region to rent a house in Sydney at $1,000 per week, a rise of 5.3 percent over the quarter. Although rents in the northern beaches and the lower north increased strongly over the December quarter, the annual growth has nonetheless been subdued in these regions – down by 4.1 percent and flat respectively.

No relief in sight for tenants in Sydney’s lower priced suburban regions with rents in Canterbury Bankstown, the west and south west increasing by 4.2 percent, 3.0 percent and 2.4 percent respectively over 2014.

The median weekly asking house rent in Canterbury Bankstown over the December quarter was $500 with the west and south west each recording median weekly rents of $440.

Recent concerns over record levels of residential investors in the Sydney market creating an oversupply of rental properties are not being reflected by the latest data.