Australia’s housing market continued along a recovery trend through November.

CoreLogic’s national index recorded a second consecutive monthly rise in November, with dwelling values up 0.8% over the month.

The new recovery trend follows a 2.1% drop in Australian home values between April and September. The national home value index is still seven tenths of a per cent below the level recorded in March, but if housing values continue to rise at the current pace we could see a recovery from the COVID downturn as early as January or February next year.

The recovery in Melbourne, where home values remain 5% below their recent peak, will take longer.

Although housing values look set to surpass their pre-COVID highs early next year, both Sydney and Melbourne home values remain at levels similar to those seen in early 2017.

While rising, Perth values are similar to mid-2006 levels, whilst Darwin values are in line with 2007 levels. At the other end of the spectrum, housing values moved to new record highs in Brisbane, Adelaide, Hobart and Canberra through November.

House values have driven gains in the combined capitals index over the past three months, rising 1.1%. While the rate of decline has eased, capital city unit values fell by -0.6% over the same period. 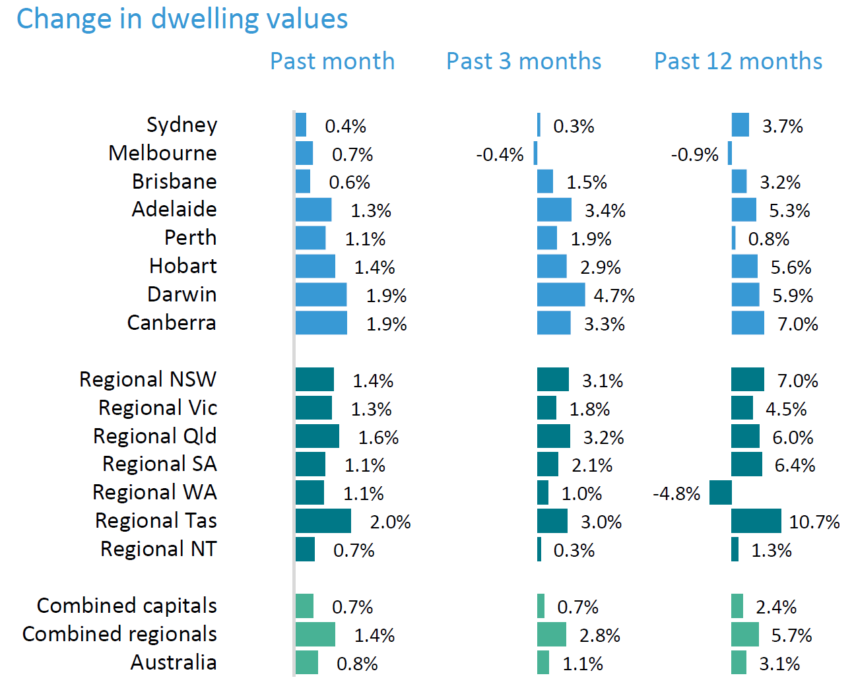 This trend towards stronger conditions in detached housing markets is evident across most of the capital cities. Relative weakness in the unit market can be attributed to factors including low investment activity, higher supply levels in some regions, and weaker rental market conditions across key inner city unit precincts.

Melbourne’s unit market is the exception, where unit values have recorded a smaller then expected decline throughout the COVID period to-date and a more substantial recovery trend over recent months.

The resilience in Melbourne unit values is surprising given the high supply levels across inner city areas and the sharp decline in rental conditions.

We suspect the stronger trend in Melbourne unit values relative to houses could be short-lived unless overseas migration turns around sooner than expected which would help to shore up rental tenancy demand. 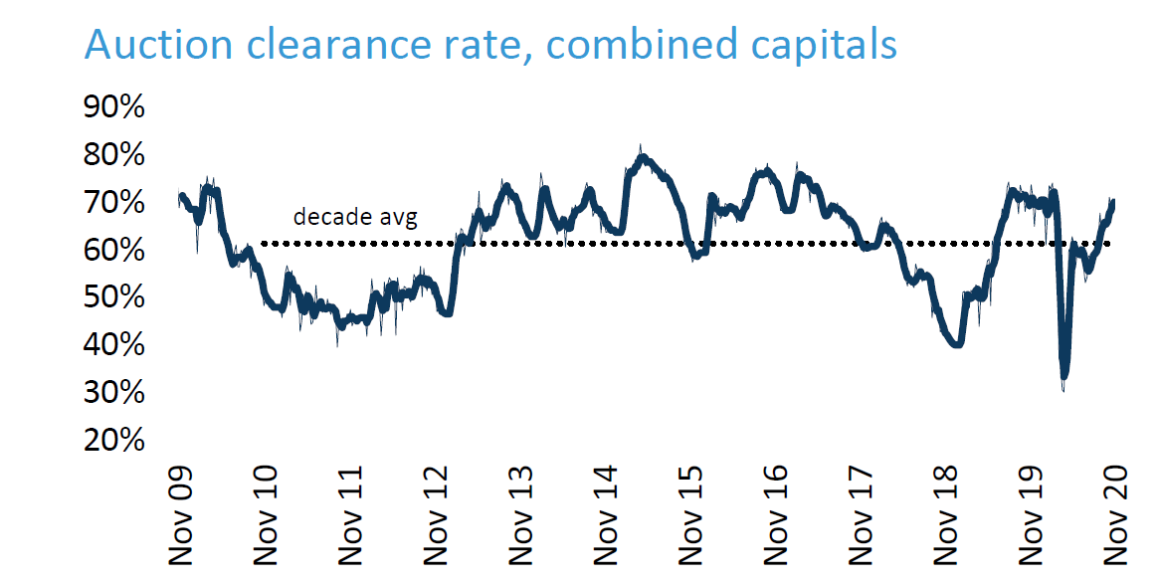 The stronger performance across regional areas of Australia continued in November, with CoreLogic’s combined regionals index recording a monthly growth rate double that of the combined capitals.

Regional home values were up 1.4% in November compared with a 0.7% rise in capital city values.

Regional Queensland has led the rise in values over the past three months, posting a 3.2% lift, followed by regional NSW where values are up 3.1%.

The lift in housing values comes as a range of other indicators point to a further improvement.

The number of properties advertised for sale remains 20% lower than this time last year, and 24% below the five year average. 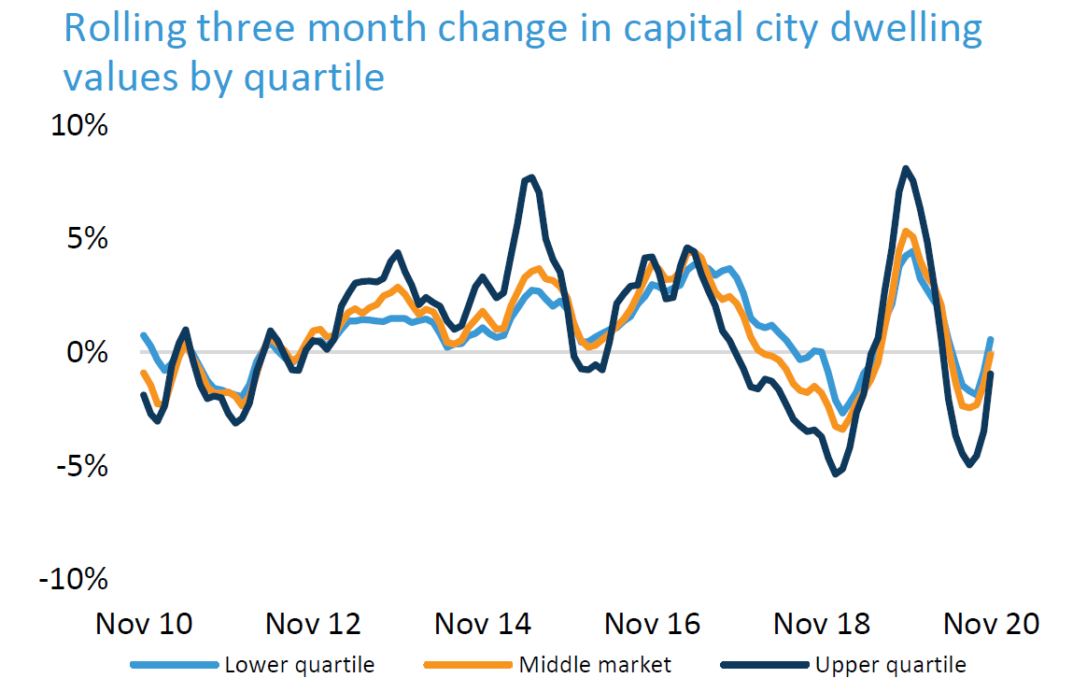 . The spring period saw a 42% rise in the number of new listings added to the market nationally, while the total number of listings held firm (-0.6%).

The number of settled sales has held reasonably firm since July, with rising sales activity outside of Victoria offsetting the sharp drop in Victorian home sales caused by the recent lockdown period.

Nationally, CoreLogic’s settled sales estimates over the past three months were about 1% higher than the same period last year.

This is partially due to strong performance in regional areas, where buyer activity has seen a more significant lift than their capital city counterparts.

Auction markets have strengthened as well, with November clearance rates holding around 70%, well above the decade average of 61%.

The strength in auction clearance rates comes as the number of auctions is expected to see a further lift in the first two weeks of December.

This will provide a timely test of the market depth prior to the seasonal slowdown through late December and January. Private treaty measures are also tightening, reflecting a market that is rebalancing towards vendors over buyers.

Low advertised stock levels, together with a rising number of active buyers, is creating a renewed sense of urgency in the market. Buyer demand is mostly being fueled by a surge in owner occupiers rather than investors, looking to take advantage of historically low interest rates, generous government incentives and an increased state of normality.

The most affordable quartile of the market is continuing to drive the strongest pace of recovery. 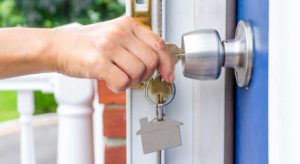 Across the combined capital city index, the lower quartile of home values rose by 1.0% in November while upper quartile values were up 0.6%.

The trend is more diverse across each of the capital cities.

Sydney is starting to see a stronger recovery trend across the upper quartile, where values were up 0.6% in November compared to the 0.3% lift in lower quartile values.

While the current value gains in the premium market are more substantial than those of the lower quartile, the upper quartile market saw significantly larger drops in home values during the COVID period. 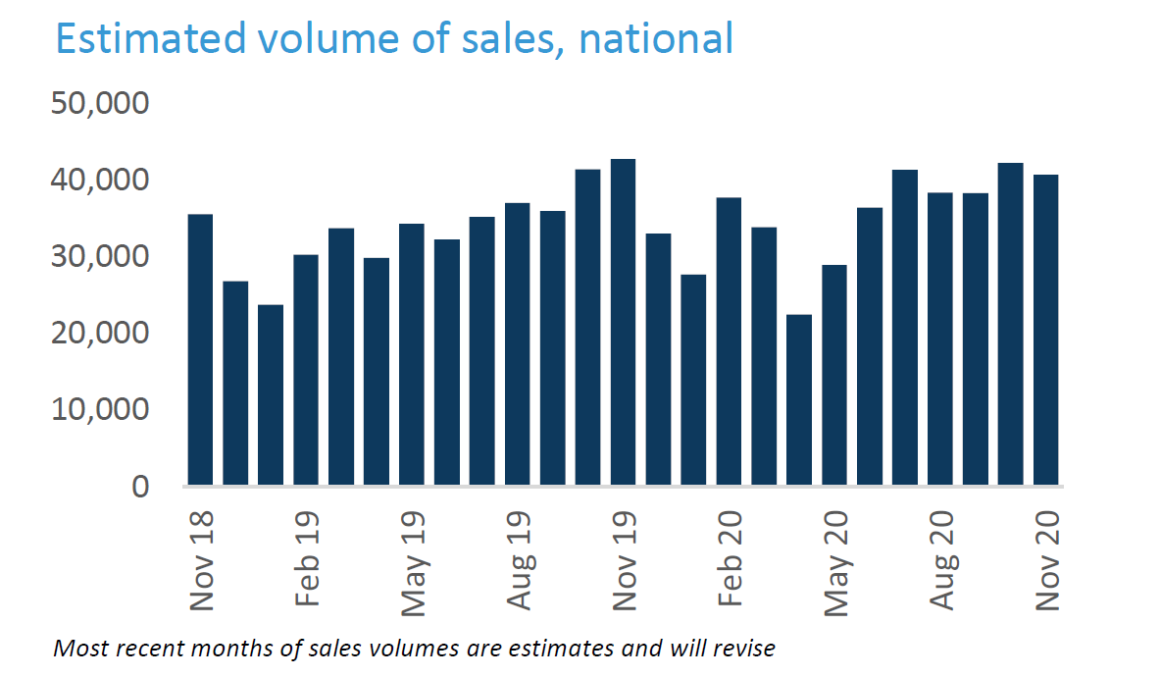 Melbourne is also seeing the upper quartile of the market start to recover, although the November growth rate (+0.7%) remained lower than the bottom 25% of values (+0.8%). Melbourne’s upper quartile home values remain -7.9% below March 2020, while lower quartile values are only -1.2% lower.

In Brisbane, there has been little difference in growth rates between the broad value-based strata, with upper quartile values 1.5% higher over the past three months compared with the 1.6% lift seen in the lower quartile values.

Perth and Adelaide growth rates have been skewed towards the lower quartile over the rolling quarter.

Lower quartile values are up 3.1% compared with a 1.1% lift across the upper quartile across Perth.

Capital city house rents were 0.7% higher in November while unit rents were down -0.6%.

The monthly data follows a now well established trend where house rents have shown a more positive trajectory than unit rents since the onset of COVID.

Across the combined capitals, unit rents have fallen by -5.4% since March while house rents have increased by 1.1%.

Most of the weakness in rental market conditions is emanating from Melbourne and Sydney where unit rents are -6.6% and -7.6% lower respectively since March.

Every capital city has shown this trend, where house rents outperform unit rents, to varying degrees, however the divergence is most pronounced in Sydney and Melbourne where tenancy demand is more reliant on overseas migration, and supply levels were already high prior to COVID.

Perth and Darwin are showing the tightest rental markets, following years of weak rental conditions and little in the way of new rental additions to the market.

House rents across Perth have surged by 6.6% since March whilst Darwin has increased by 6.1%. Unit rents are also rising in these capital cities, up 3.9% and 5.3% respectively. 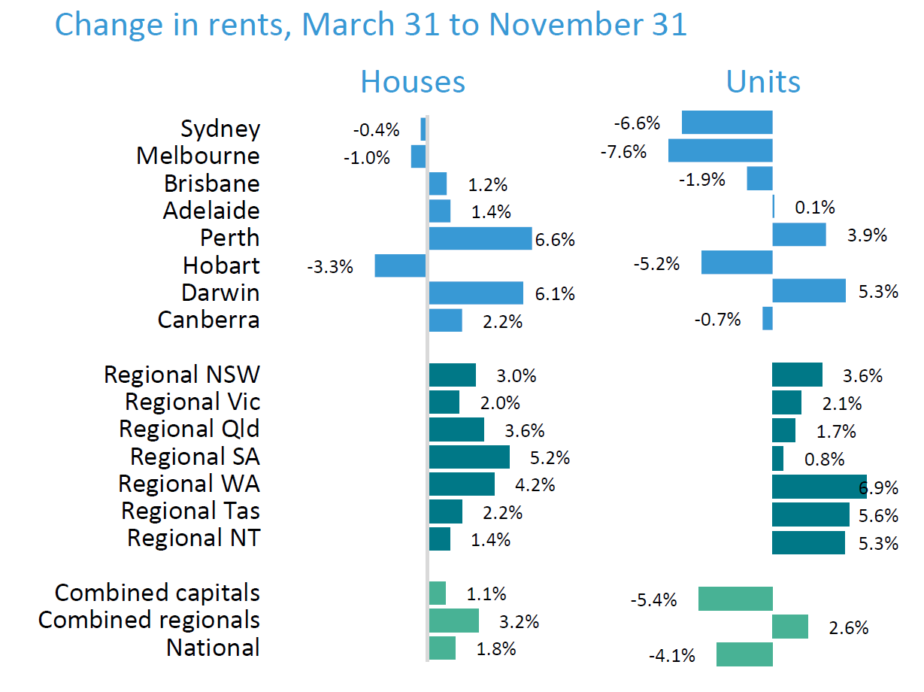 Hobart has recorded a large drop in rents, following a multi-year surge in rents prior to COVID. Although Hobart rents remain lower relative to March, the November data shows a 1.0% rise in both house and unit rental rates.

This may be an early sign that rental markets are tightening as state borders re-open and labour market conditions improve.

As labour markets tighten and state borders re-open, rental markets are likely to firm, although in Sydney and Melbourne, where temporary migrants from overseas comprise a large part of inner city rental demand, an improvement in rental conditions will be more dependent on international borders re-opening.

In summary, housing demand is rising due to the broad range of stimulus measures and changes in market sentiment.

Record low interest rates are one of the primary factors supporting a lift in buyer numbers. Improving economic conditions and containment of the virus have lifted consumer spirits to higher than pre-COVID levels. 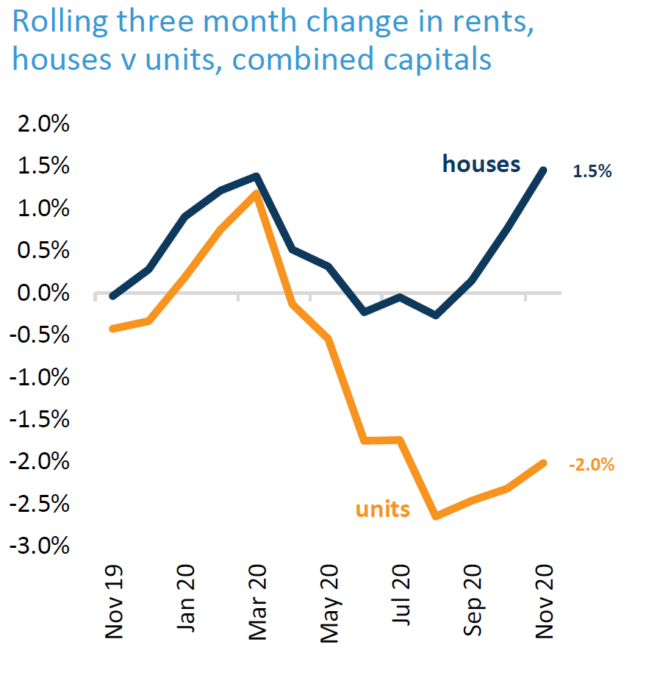 This creates some urgency amongst buyers which in turn is adding to the upwards pressure on home values.

The recovery trend is evident across all the broad regions of Australia, however regional markets are continuing to show a stronger growth trajectory in housing values relative to the capital cities.

The duration of this trend is uncertain due to mitigating factors, including employers embarking on ‘return to office’ programs, and the price gap between the capitals and regional areas narrowing.

The trend clearly has some momentum, however, and will likely persist into 2021.

The housing risks associated with less fiscal support and the expiry of mortgage repayment deferrals have lessened over recent months.

Job numbers continued to improve throughout October, despite the wind back of JobKeeper, and the large majority of

mortgage repayment deferrals have already moved back onto a repayment schedule.

The recovery trend is being led by owner occupiers while investor participation remains at record lows.

Historically we have seen investor demand mostly concentrated within the largest capital cities, however with lower price points, higher yields and arguably better prospects for capital gains, the smaller capitals and regional centres may attract more investment attention in 2021.

Although the pipeline of high-rise apartment projects has reduced sharply, it will be some time before the large number of projects under construction work their way through to completion.

With rents and occupancy rates falling, the outlook for this sector remains weak.