Australian capital city dwelling values increased by 1.3 per cent in October, driven largely by the Sydney housing market as well as significant value growth in Melbourne and Brisbane.

Combined capital city dwelling values increased by 7.9 per cent over the last 12 months and are up 8.2 per cent year to date.

Rismark CEO, Ben Skilbeck, added that while Sydney has eclipsed its previous cyclical high and Melbourne is near its peak, Brisbane remains 8.4% below its highs.

Mr Kusher said that of note were the recent weaker capital growth conditions for the Perth housing market.

According to Mr Kusher, two months ago Perth was experiencing the fastest 12 month rate of value growth of all capital cities at 9.4 per cent, whereas this has now slowed to 6.9 per cent following a -0.6 per cent fall in home values over the past quarter.

“Although values are broadly rising, the strength in the market is being fuelled by Sydney where home values have only increased at an average annual rate of 2.7 per cent over the past decade. Therefore, it is little wonder that the Sydney market is responding strongly to record low mortgage rates given its long period of underperformance coupled with a pent up undersupply of new housing over recent years,”

Outside of the home values growth, most other indicators are pointing to an ongoing improvement in overall housing conditions.

Over the three months to August 2013, RP Data estimated that capital city home sales were 20.1 per cent higher than the same time in 2012. The number of capital city properties listed for sale is 12.0 per cent lower than it was a year ago.

There has also been marked improvements in the time it takes to sell a home and the level of discounting by vendors.

Capital city homes are currently selling after 44 days compared to 56 days a year ago and discounting levels have reduced from 6.8 per cent a year ago to 5.7 per cent currently.

Rismark’s Ben Skilbeck commented that while overall housing credit growth remained modest at nearly 5 per cent per annum, the latest lending commitment data shows the month of August 2013 had commitments for existing dwellings which exceed the August 2012 month by 10.2% for owner-occupiers and 22.6% for investors.

RP Data’s Cameron Kusher said that with home values growing at a much more rapid pace than rents we are already seeing signs of an erosion of rental returns, particularly within the Sydney and Melbourne markets.

“It could be expected that value growth will continue to outpace rental growth within these cities over the short term and if this occurs it will lead to an ongoing decline in rental returns.” 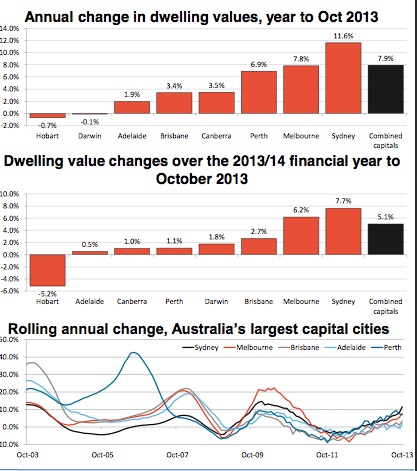