The number of residential vacancies nationally has picked back up slightly during November.

Vacancies appear to be following the common seasonal trends expected at this time of year, where rental accommodation tends to become more available for a variety of factors.

The most predominant of these factors is that as University sessions finish for the year, many students vacate their rental accommodation as it is no longer needed over the longer summer break.

Perth and Darwin have continued to record alarming increases in vacancies, whilst many of the other capital cities have remained stable year-on-year.

However, Hobart and Melbourne have recorded yearly declines.

SQM Research believes the falls in Hobart most likely relate to the recovery in its local economy, in turn being benefited from the lower Australian dollar helping its local tourist industry.

The declines in Melbourne on the other hand, have been a little more difficult to assess, but this may be a result of a brief lull in construction activity, or possible a recent surge in its local population.

On a year-on-year basis we are seeing rises in Darwin and Perth.

The reasons for the rises in Darwin and Perth are pretty clear in the sense that it is related to the ongoing mining downturn, causing a lot of loss of employment, particularly temporary/contract jobs.” 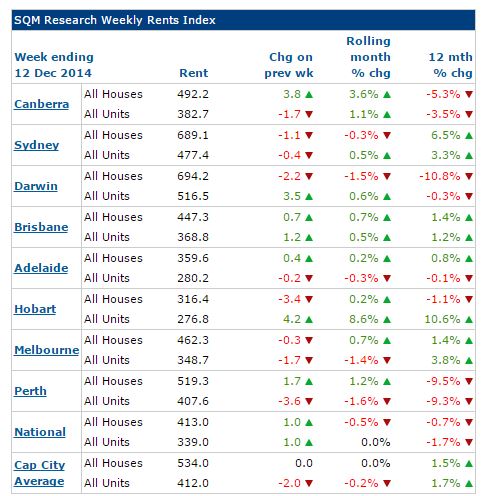