Property or shares – which make a better investment?

An interesting article from the Sydney Morning Herald comparing the returns from property and shares over 10 and 20 year periods respectively to December 2013. 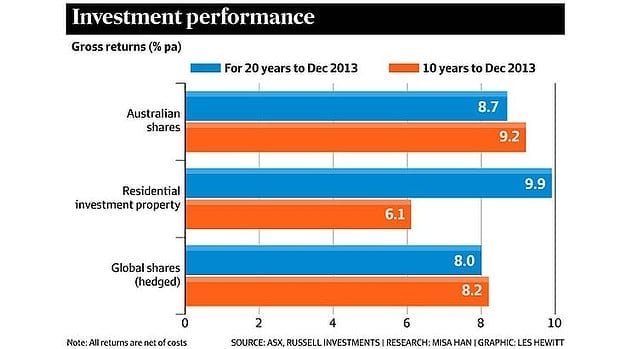 Of course, the conclusions usually depend on the preconceptions and prejudices of those making them, but let’s take a quick squiz anyway…

First and foremost, what the above chart shows is that a diversified, dividend-rich portfolio of shares continues to be a wonderful investment for those with a considered and long-term outlook.

Gross returns of 8.7% over the last 20 years imply that an unlevered $100,000 portfolio of shares in 1993 could have been worth a little more than $500,000 by December 2013, a fabulous performance by anyone’s measure which easily outperformed the rate of inflation or returns from fixed income products.

Over the last 10 years, despite the global share markets crash during the financial crisis, gross returns inclusive of dividends from Australian shares recorded an even stronger 9.2% per annum, implying that you could have turned $100,000 into somewhere just shy of $250,000 over the decade to December 2013, with dividends having been reinvested.

The returns continue to be forever volatile, of course, but over a long time horizon a diversified portfolio of productive, profitable, industrial companies should deliver outstanding dividend income and capital appreciation.

The returns on residential investment property were recorded as having “lagged” at only 6.1% per annum over the past 10 years.

As noted above, I don’t usually bother too much with reading the conclusions of the commentators, because they invariably reflect the prejudices of those making them, on both sides of the property versus shares fence.

It’s certainly the case that that residential property prices are likely to experience lower capital returns in the future than they have in times past since we have already experienced the structural shift to lower inflation and equivalently lower interest rates, as well as having undergone a demographic shift towards a greater preponderance of dual income households.

My chart below shows that dwelling prices have acted in markedly different fashion by capital city over the last decade: 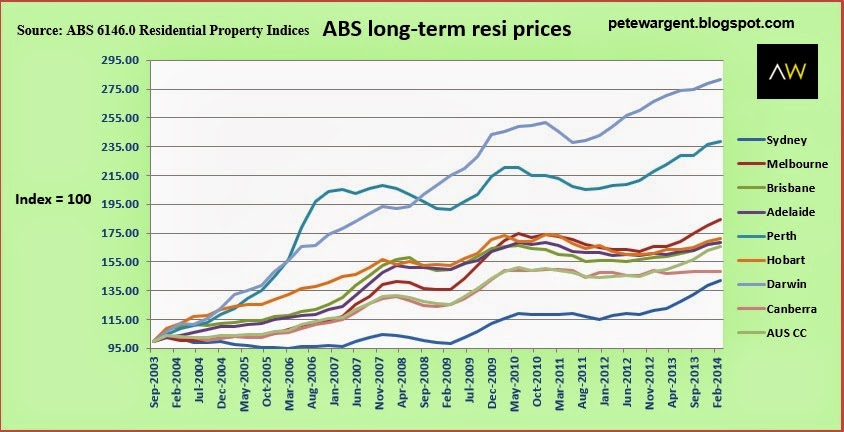 Stretch the figures back 20 years, and Australian residential property has returned an astounding 9.9% return per annum, a huge compounding annual return and the sorts of figures, one supposes, which allow people like me to be pontificating on matters of the world via the blogosphere rather than doing anything more productive with my time.

Over 20 years, property has been the strongest performing asset class by a sizeable margin, and a huge margin when leverage is taken into account.

To a certain extent, there must be limited value in comparing returns on the two asset classes since they serve very different purposes and are as quintessentially different as chalk and cheese.

The main advantages of investment property may seem to be:

(a) the greater leverage used by average investors, and

(b) that average punters appear more inclined to hold investments through downturns due to the lack of daily quoted dwelling prices.

Note, however, how these perceived benefits can also be disadvantages in disguise for the unwary.

In other words, those who ‘get it wrong’ can be burned savagely by these twin characteristics of real estate by

(a) borrowing too much, and

(b) holding on to a heavily leveraged asset which experiences a long, slow deflation in price or market value.

I’m not sure how much value there is in including a stylised example here, since property investors tend to be more focused than diversified and thus returns are heavily dependent on correct asset selection.

For example, I’m extremely grateful to be a property owner in south-west London, where prices are continuing to appreciate in a near-parabolic fashion, but one suspects you’d have found few young owners of a sunny disposition in regional UK real estate over the past 8 years.

In any event, where a capital growth rate of 6% per annum on a property is experienced over a 10 year period – which well-located capital cities properties have often achieved during the last couple of decades – this would have broadly turned a $500,000 house into a $900,000 house over that 10 year time horizon.

Assuming an initial investment comprising a 10% deposit of $50,000 plus, say, $25,000 of closing costs including stamp duty, transfer and legal fees, a compounding annual 6% capital growth created equity of an outlandish $450,000. 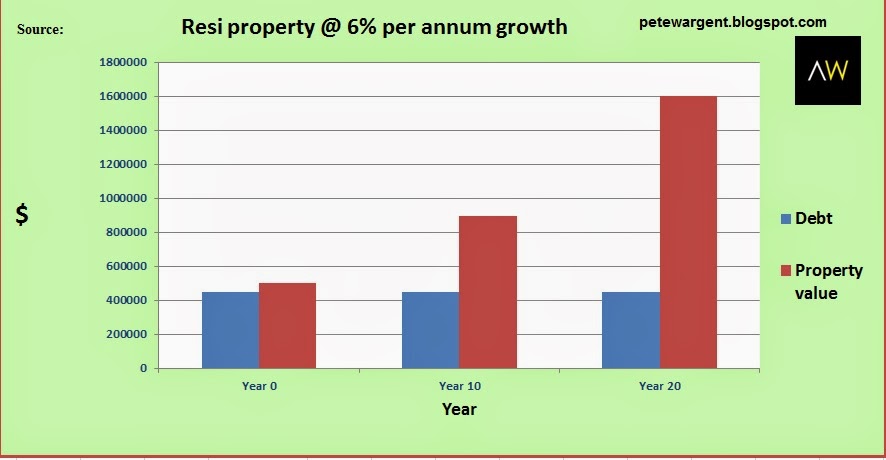 In other words, ignoring for the sake of simplicity any holding costs (due to low gross yields well located residential property may generate negative a cash flow in its early years before generating a positive income later in the life of the investment), you may have recouped your initial investment of $75,000 some 6 times over in a decade, a level of return on investment of closer to 20% per annum on the initial cash outlay.

That is to say, a rate of return that has simply not been achievable in another asset class with an equivalent level of risk for the average investor.

How has this ever been so?

The main reason is that residential property mortgages have a unique triumvirate of conditions attached, as I discussed in greater detail in my piece “The basic characteristics of property as an investment” here:

Will there be a property downturn in the next decade?[sam id=40 codes=’true’]

There will. In this era of lower inflation, dwelling prices will actually fall in value in nominal terms far more often than than they have done in decades gone by.

Indeed, we have already seen this happen in the past decade, with prices falling in nominal terms in several calendar years.

Due to the high level of transaction costs, investment property should ideally therefore be held over a period of more than two decades, in my opinion.

In summary, two very different asset classes that are nigh on impossibly difficult to compare in any meaningful manner.

It is possible to use significant leverage in the share market too, but unfortunately very few investors manage to achieve this with the requisite level of skill.

In the last decade, in theory you could have made a motza by leveraging heavily into the share market, but in reality, most – at the risk of committing the cardinal sin of verbing my nouns – would have been margin-called out during the 2008 crash.

Smart equities investors who kept their powder dry borrowed against the homes at low mortgage rates in 2009 to pick up parcels of shares in wonderful companies such as Wesfarmers (WES) and Commonwealth Bank (CBA) when they were trading at incredibly cheap Price/Earnings (PE) ratios and the market was “on sale”.

In this way, share market returns can also begin to escalate massively, but for various reasons it seems to be the case that only a select few manage to pull this strategy off with any real panache.

The truth is that equities are a wonderful asset class for those who learn to treat shares as an income asset and derive their benefit from the ever-increasing tax-advantaged dividends with franking credits.

Instead, most seem to ask: “Which shares are going to go up soon?” focusing exclusively on price action and indulge themselves in the endless and fruitless conjecture of market commentary, which is somehow miraculously to divine which direction the market will move in next.

'Property or shares – which makes a better investment?' have 3 comments