National residential property listings fell during the month of March.

This was a steady result with Canberra being the only city to record a material change for the month with listings falling by 6.1%.

Notably, property listings in Sydney and to a lesser extent Darwin are considerably higher than this time last year (March 2015).

Darwin also experienced yearly growth with sale listings up 5.9% based on a total 2,079 listings.

These figures indicate that the number of property sellers in both residential markets has increased when adjusting for seasonality.

In contrast, year-on-year results indicate that once again Hobart and Melbourne are recording considerable yearly falls.

Hobart recorded the biggest yearly change, with sale listings falling by 8.7%, reducing the number of properties for sale to 3,840.

Real estate listings were very steady over the course of March, however we note the decline in Canberra, which is yet more evidence the market there has now turned the corner.

Note the ongoing decline in listings in Hobart, which is also reflective of a recovery in the nation’s south.

Also note that Hobart recorded rises in asking prices for the month. 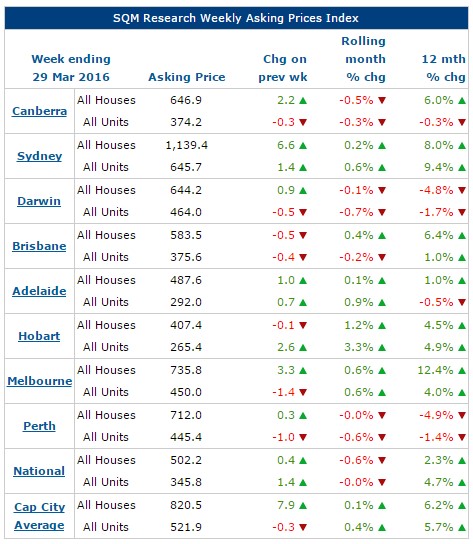 Over the past month, the capital city average for asking prices has increased 6.2% for houses, and 5.7% for units.

'Property Market Update: Median Asking prices and Stock for Sale' have no comments