The number of Australian residential property sale listings climbed in most capital cities during the month of July, excluding Hobart which recorded a modest fall of 0.5%.

This rise is abnormal for July as sale listings are generally subdued this time of the year.

Once again, national increases have been largely driven by Sydney and Melbourne sale listings

In Sydney and Melbourne the rises recorded are the largest for the month of July since SQM’s listings records begun in 2008.

Melbourne recorded the biggest yearly change, with listings falling by 10.3%, reducing the number of properties for sale to 37,179.

Hobart soon followed with records indicating a yearly change of 7.2%

I believe the results do represent an indication that the measures undertaken by APRA in slowing investor demand are now having an impact on the market.

At this stage it is too early to call the magnitude of the impact, however it is likely that the measures (which SQM still regards as moderate) will slow the rate of dwelling price inflation recorded, rather than create a price correction.

Asking prices for Sydney houses continued to climb over July, with a total monthly rise of 1.5% for houses and 0.4% for units.

The median asking price for a house has now reached $1,124,900 while the median unit asking price in Sydney is $619,500, according to SQM Research.

In contrast, median asking house prices in Perth continue to fall with a year-on-year comparison showing a 12 month decline of 4.2% for houses, and 1.2% for units.

Darwin also recorded yearly falls, in particular asking prices for units are down 7.9% over the last 12 months. 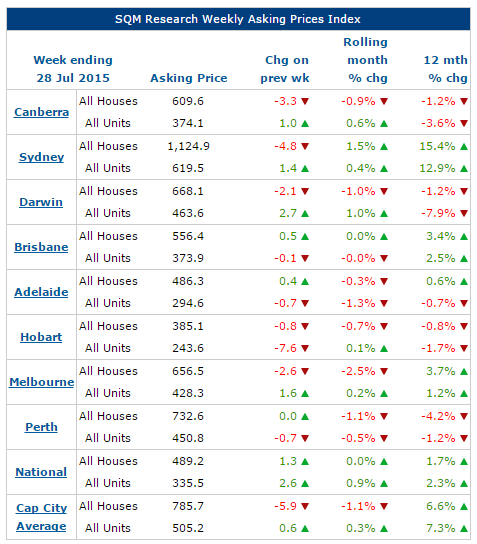 'No winter slowdown here: Property listings on the rise' have 1 comment