The number of properties for sale around Australian rose slightly during March, with national stock on market coming to a total of 352,369 – a monthly increase of 1.8%.

As you can see from the chart below all capital cities except for Canberra experienced monthly increases, with the Melbourne, Perth and Sydney property markets recording the most substantial rises – 5.0%, 5.2% and 6.8% respectively.

That being said, year-on-year the nation’s stock is down by -5.2%, with Sydney still recording significant falls: -17.0% since March 2013. Contrastingly, Darwin’s stock levels have soared since this time last year, revealing a 12.8% yearly increase in sales listings.

Stock on market levels tend to have a strong seasonal influence month on month, hence why SQM Research focuses on the year on year change. In April SQM Research does expect a fall in listings due to the Easter holiday period.

There are no new trends that have come out of the data this month other than we note that Melbourne still has an elevated amount of listings in the market and so this has made us sceptical of recently reported large increases in dwelling prices for that city. There is also further evidence that Melbourne vendors, overall have struggled to lift their asking prices.

SQM Research’s asking prices were updated on Tuesday, covering the last week of vendor activity and this now completes the first quarter of the new year. 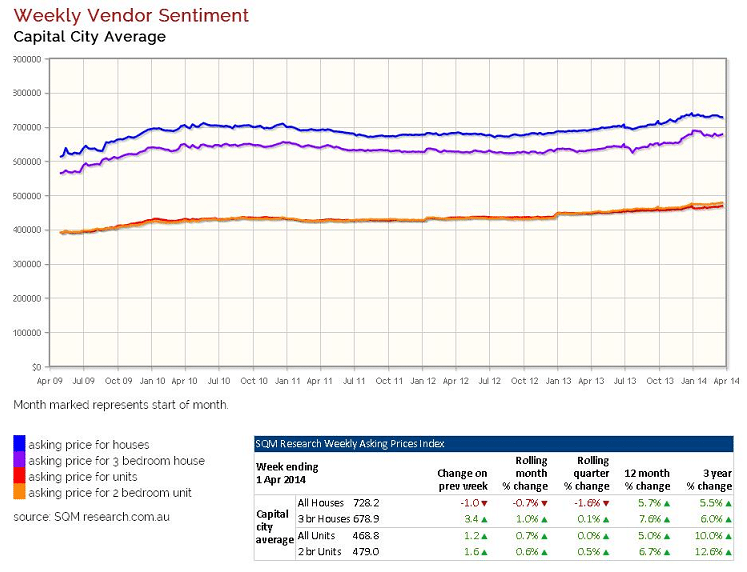 So, it was a relatively weak result for the quarter with vendors struggling to lift their asking prices.

Surprisingly, weakness was recorded in Sydney with asking prices for houses falling by 1.6% for the quarter and Units rising by just 0.2%.

Adelaide recorded the strongest result for the quarter, with asking prices for houses rising by 0.9% and units rising by 3.5%.

This is different to what others are reporting

This is all in contrast to the very bullish findings from the RP Data daily index, which among other things, reported a very sharp rise in Melbourne dwelling prices of 5% for the Quarter and now has Sydney up over 15% for the year.

“While that index may be meeting our forecasts this year of 15-20% rises for Sydney, SQM Research continues to remain dubious of it and strongly recommends for you to follow the ABS and APM versions of house price sold data, which will be reporting early next month based on a lot more sold data for the quarter gone by.