The number of Australian residential property sale listings fell in all capital cities during the month of August.

Melbourne recorded the biggest yearly change, with listings falling by 20%, reducing the number of properties for sale to 35,474.

Hobart soon followed with records indicating a yearly change of 12.6%.

Within the last 12 months sale listings for Darwin and to a lesser extent Perth have recorded high yearly growth.

It is another surprise result and a reversal of the surge in listings during July.

Normally listings start to rise in August ahead of the spring selling season.

We will wait until the September reading before drawing too many new conclusions on the market.

Asking prices for Sydney houses continued to climb over July, with a total monthly rise of 1.2% for houses and 0.7% for units.

In contrast, median asking house prices in Canberra recorded yearly falls with a year-on-year comparison showing a 12 month decline of 4.8% for houses, and 1.4% for units.

Perth median asking prices continue to record yearly falls, in particular asking prices for houses are down 4.6% over the last 12 months, and 1.2% for units. 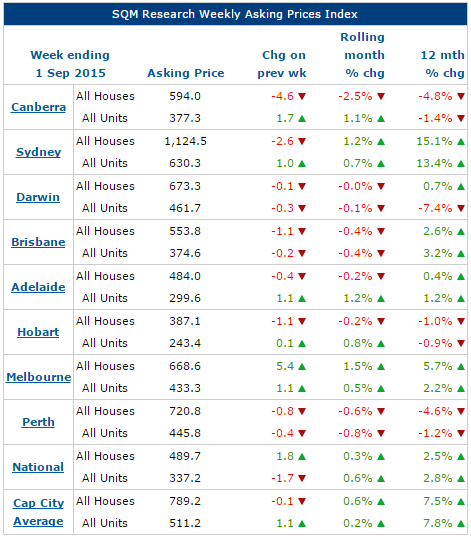 'Property listings drop in August' have no comments