Housing values eased their way into Spring, with the RP Data CoreLogic Home Value Index posting a 0.1% capital gain across the combined capital cities over the month of September.

Dwelling values across Australia’s capital cities were virtually flat over the month of September according to the RP Data CoreLogic Home Value Index which recorded a 0.1 per cent rise in values over the month.

This translated into a 2.9 per cent capital gain over the third quarter of 2014. 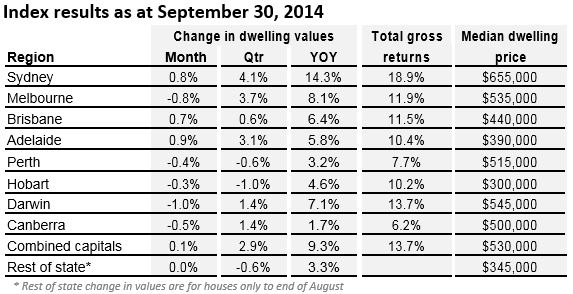 This was once again driven by exceptionally strong conditions across the Sydney and Melbourne markets where the quarterly capital gain rate was 4.1 per cent and 3.7 per cent respectively.

Additionally, Adelaide recorded a solid increase in values over the September quarter, posting a 3.1 per cent capital gain.

Perth (-0.6%) and Hobart (-1.0%) were the only two capital city markets to record a decline in dwelling values over the September quarter.

Dwelling values are now 9.3 per cent higher over the twelve months to the end of September 2014, with every capital city recording an increase in dwelling values over this period.

Sydney values are driving the growth trend, increasing by 14.3 per cent over the past twelve months.

A substantial gap exists between Sydney and the next best performer, Melbourne, where dwelling values increased by 8.1 per cent.

Darwin was the third strongest performer over the past year with a 7.1 per cent capital gain, followed by Brisbane at 6.4 per cent and Adelaide at 5.8 per cent.

Canberra recorded the lowest rate of annual capital gain at 1.7 per cent. 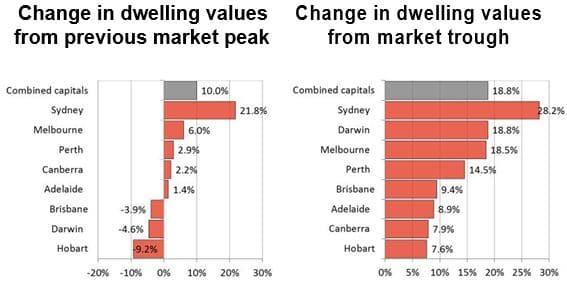 Despite the ease in capital gains over September, other indicators remained strong over the first month of spring.

More listings are entering the market place as the weather warms up.

The big test for the housing market will be whether additional stock is absorbed by an increase in buyer numbers.

The annual rate of appreciation in dwelling values has actually been moderating since reaching a peak in April this year.

The fact that the annual trend of capital growth has been trending lower is an important factor to note as it highlights that the rate of capital gain is no longer accelerating.

Even though housing market conditions remain very buoyant, we have been seeing the 12 month trend drifting lower since peaking at 11.5per cent in April.

A moderating annual trend, as well as the relatively flat September result, is likely to be welcome news to policy makers and potential buyers after the winter months recorded the largest capital gain since 2007.

The softer September result is also likely to be seen as a positive indicator by the Reserve Bank which has recently raised concerns about the level of value growth and speculative investing in the Sydney and Melbourne housing markets.

The high rate of capital gain has sparked further debate around the sustainability of housing markets around Australia, however most of Australia’s capital cities are recording a sustainable rate of appreciation.

Since the beginning of 2009 we have seen Sydney values increase by approximately 51 per cent and Melbourne values up by almost 45 per cent.

Across the state capitals, the next highest capital gain over this period has been Perth, where values are up 14.5per cent.

The Reserve Bank has recently singled out Sydney and Melbourne as the markets that require some caution, particularly from investors who are buying into markets at a mature time in the growth cycle, at high price points and where rental yields are very low.

Not the same strong growth as previous cycles.

When you look back through the cycles of the housing market, the current growth phase isn’t as aggressive as what was recorded over previous cycles.

At their peak, on a rolling annual basis, capital city dwelling values increased at a faster pace over each of the previous three growth cycles in 2009/10, 2007 and 2001/03.

The big difference over this cycle is that growth has been very much concentrated within the nation’s two largest capital cities and has increased for a longer period than the previous two growth phases.

What is concerning is that we have now seen the ratio of housing debt to disposable income reach a record level at 137.1 per cent and we are seeing substantial investor concentrations within the two largest capital cities, particularly in inner-city unit markets within these cities.

The Reserve Bank has recently highlighted the risks that are becoming more evident in the Sydney and Melbourne housing markets and therefore it is no surprise that the Reserve Bank, together with APRA, is now contemplating the likelihood of introducing macroprudential tools to reduce some of the exuberance in the housing market and rebalance investor demand without having to resort to monetary policy.

'Where is property going? It depends where you look | Tim Lawless' have no comments