There’s good and bad news when it comes to this year’s tax return.

Have you sifted through dozens of pieces of paper yet, sorting out bills and receipts as you prepare for your tax return?

I did it just the other day and there’s good and bad news this year for me. Normally, I expect a pretty big tax return. But this year it looks like the return will be much smaller, even though I also have close to five months of maternity leave to take into account.

I was quite surprised when I realised that our investment properties are now costing much less than previous years to hold, even though we’ve had a few hiccups along the way with tenants defaulting and unexpected repairs. 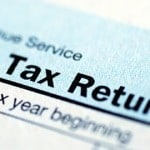 Considering the leave I’ve taken, as well as the occasional dramas that sometimes come with owning an investment property, I was confident of a massive tax return.

But nope, nothing amazing this year. In fact, probably the smallest yet, since I started investing.

It’s all because of lower interest rates at the moment. We’re now paying rates of less than five per cent for more than 50 per cent of our loans (unfortunately some are locked in at a higher rate but that will end soon) and with the rental yields on our properties at around five per cent, we’re pretty much breaking even.

Of course, we’ve had bills such as water, insurance and body corporate rates to take into account, but after a tax depreciation report is also factored in, it pretty much evens out.

Ironic isn’t it, to almost be disappointed with a lower tax return? But this is actually good news, because it means it’s costing us less to hold our properties.

Have you sorted out your taxes for the past financial year yet? I can almost guarantee that if you take a look at your statements and balances, your tax return this year will be much less than a year or two ago.

It’s exciting for property investors because setting yourself up for retirement is now so much more achievable than it was in previous years.

As rents rise, as interest rates remain at all time lows, you can almost kick yourself for not trying to purchase more properties during the downturn.

Things have dramatically changed in just 12 to 18 months and it’s hugely rewarding to see that sacrifices are actually no longer so difficult.

Even on a week-to-week basis, finding the cash to cover mortgage repayments is becoming simpler too. The rent comes in, the loan goes out, but the gap is much less.

You really have to wonder what’s holding you back from not buying an investment property, with interest rates the way they are currently.

Even if you have concerns about ongoing repayments, it’s unbelievable to think you can actually now lock in for around five per cent for five years, if needed.

Of course, the downside is that prices are rising as investors enter the market again. And factor in the low rates as that’s obviously something that now needs to be taken into account.

But as for holding properties that have been in a portfolio for a few years, I’m sure most investors will notice more black statements, rather than red ones.

It’s a very exciting time for investors and just goes to show that the tortoise, rather than the hare, really does win the race, by taking a simple ‘buy and hold’ approach.

So don’t be disappointed if your tax return is smaller than last year. Give yourself a pat on the back that your hard work is paying off, your bank balance is looking much better and you have proof that it’s getting easier to own an investment property.