According to data from the Australian Bureau of Statistics new residents from overseas made up more than half of the 54 per cent total population growth that occurred over the past 12 months, with natural increases accounting for the remaining 46 per cent.

This is in spite of the fact that net overseas migration has declined significantly from the previous year, with 220,000 new Aussies settling here up until March 2010, compared to 167,000 for the year to March 2011; a drop of 24 per cent.

At the end of March this year, the ABS says Australia’s total residents numbered 22,546,300, even as our overall growth rate slowed to 1.4 per cent per annum, down from its peak in the year ending March 2009 of 2.2 per cent.

Reported in the Australian KPMG demographer Bernard Salt has attributed the slump in net overseas migration to Julia Gillard’s somewhat opposing view to that of former PM Rudd, with today’s leader determined to keep a tighter rein on Australia’s population growth.

However Salt expects immigration numbers to stabilise in the coming year or two at slightly higher levels than those seen over the current year.

“The issue is that we seem to have dropped below the level required to deliver a big Australia,” he said.

Natural influences on population growth included a 4 per cent rise in the number of registered deaths in the past year, compared with a 1 per cent decrease in the number of births. However the latter still outnumbered the former with 146,600 deceased Australian in the year to March 2011 and 291,000 new births registered.

So what does a slow down in the overall rate of Australia’s population growth mean for our property markets?

In the long term, property values are dependent on population growth and the wealth of our economy. And despite the slowdown, our economy is still growing and the resources boom will assure our overall wealth.

In the short term, it could mean house prices will remain flat for a little while longer as demand for accommodation comes back a bit and supply picks up across the likes of Melbourne, where a current saturation of apartment stock is hitting the market.

This has positive ramifications for long term investors who can expect to enjoy further good buying opportunities in this slower market and as more people succumb to the current economic jitters, there will be less competition out there.

Secondly, generally a slowdown in population growth means a slowdown in inflation. So we can expect interest rates to start falling if not by the end of this year, then definitely by the beginning of 2012. And that’s always good news when it comes to meeting monthly repayments and reducing out of pocket expenses. 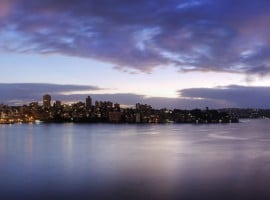