In the second half of 2018, the population of NSW surpassed the 8 million mark.

This milestone has been somewhat overlooked in the current discourse around the challenges associated with rapid population growth in Australia.

For the last decade, the population growth rate in NSW has been at or around the national average.

This milestone was only reached twice prior to 2000.

This blog looks beyond the growth rate to examine the dynamics of population change in NSW.

What is the population of NSW?

The population growth rate for the calendar year was 1.6%, and the volume of growth was 123,180 persons.

So despite the lower growth rate in NSW, in terms of the volume the difference was only around 16,000 persons.

The chart below shows the volume of population growth in NSW and Victoria since 1982.

Throughout the 1980s and 1990s, the volume of growth in NSW generally exceeded that in Victoria – 1989 was the rare exception.

However this order reversed in 2002, and since that time Victoria’s population growth has been higher compared to NSW. 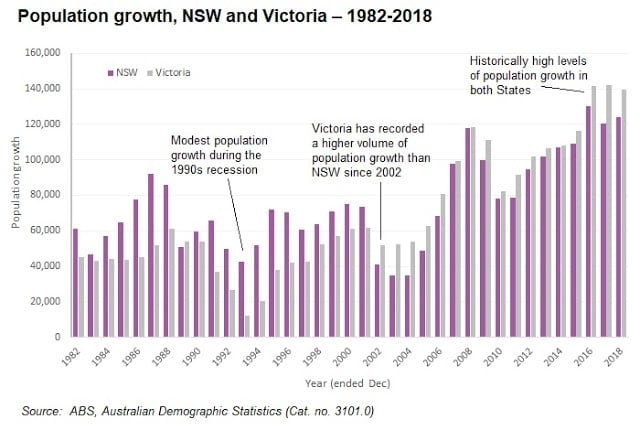 The chart also shows the steep increase in the volume of growth since the middle of the 2000s.

Although some of this was due to some definition changes in the ABS methodology, both NSW and Victoria recorded growth of 100,000 persons in the same calendar year – 2008.

Unsurprisingly, most population growth in NSW occurs in Sydney.

At June 2018, the population of the Sydney metropolitan area was 5.23 million.

Most parts of Sydney recorded population growth in 2017-18, but the strongest growth was recorded on the urban fringe, particularly in Camden.

Outside of Sydney, the growth hotspots were located along the coast and some regional centres.

In common with other parts of Australia, many rural areas in NSW recorded population decline in 2017-18, continuing long-standing trends.

The chart below shows the components of population change in NSW over the period 1982-2018.

The volumes, particularly for overseas migration, ebb and flow but the overall trends have remained remarkably consistent over the 36 year period. 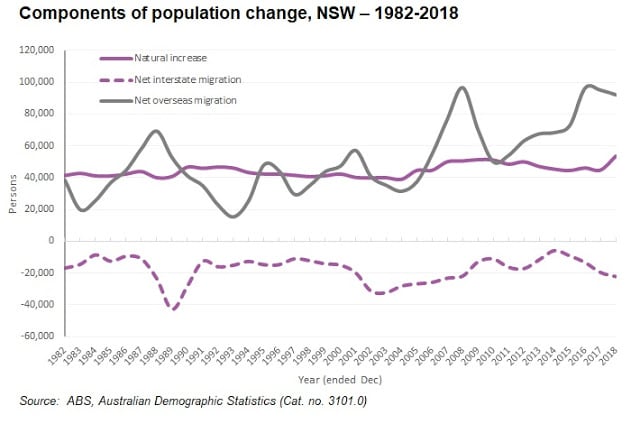 In other words, NOM is a major contributor to population growth in both states.

Historically, most interstate migration loss from NSW has been to Queensland, and to a lesser extent, Victoria and the ACT.

Interstate migration is volatile, with higher losses occurring in the late 1980s and early 2000s. 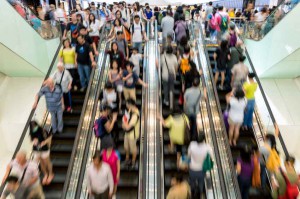 In the last ten years, there was a downward trend in the net loss, and in 2014 reached its lowest level for many decades (-5,580 persons).

However, since that time the trend has reverted, and in 2018 net interstate migration loss from NSW totalled 21,900 persons.

Perceptions that moves northward to Queensland consist mainly of retirees are not supported by the data.

Like overseas migrants, interstate migrants are likely to be young adults, perhaps moving for employment and/or lifestyle reasons.

Likewise, some commentators have suggested that the recent surge in Tasmania’s population growth is fuelled by former Sydney residents escaping high house prices, but again, this is not supported by the data.

After all, there are plenty of other places in NSW that offer relatively affordable housing opportunities without the need for a long distance move.

However, there is some question around the veracity of the birth numbers in NSW.

2018 saw a 10% increase in the number of births, a trend that was not apparent in other states.

In the past there have been registration delays in NSW, so the 2018 number may include a “catch up” element in the numbers.

The number of deaths did not change dramatically between 2017 and 2017, so this has manifested itself as an increase in the level of natural increase.

Of course, whether the 2018 number is an anomaly won’t be apparent for another year or so when the 2019 data is released. 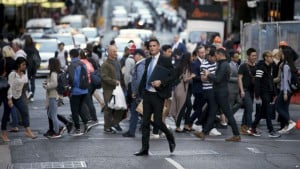 Population growth rates are a good basis for comparison, but they don’t provide the entire story.

NSW has grown at or around the Australian average for most of the 2010s, but the volume of growth is at historically high levels.

When compared with Victoria, the difference in the volume of growth is not large.

Population change in NSW has a spatial element, with stronger growth in Sydney, and population decline in many rural areas.

In terms of the components of population change, NSW grows through net overseas migration and natural increase, but loses population through interstate migration to other parts of Australia.

'Population growth in NSW is deceptively strong' have 1 comment