The 2016 Census was recently released and it will show that the Australian population is markedly higher than was previously estimated, and furthermore it is growing faster than previously thought.

The increase has not been due to natural population increase, with the mini-boom in births actually slackening off a little lately. 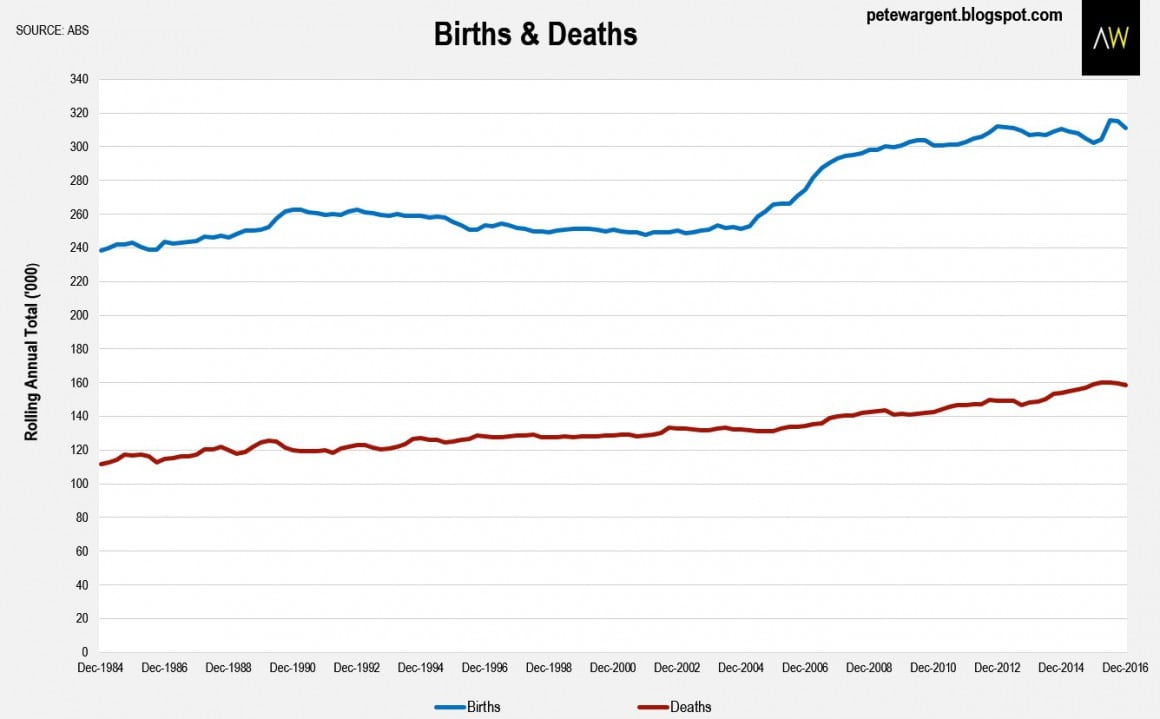 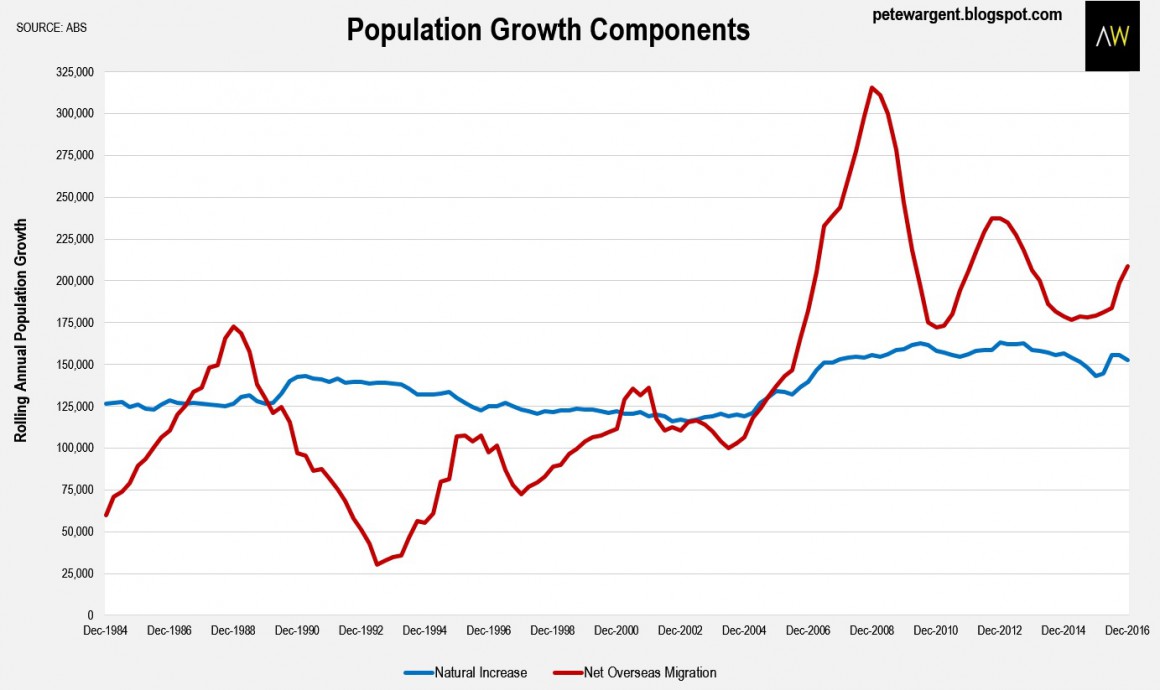 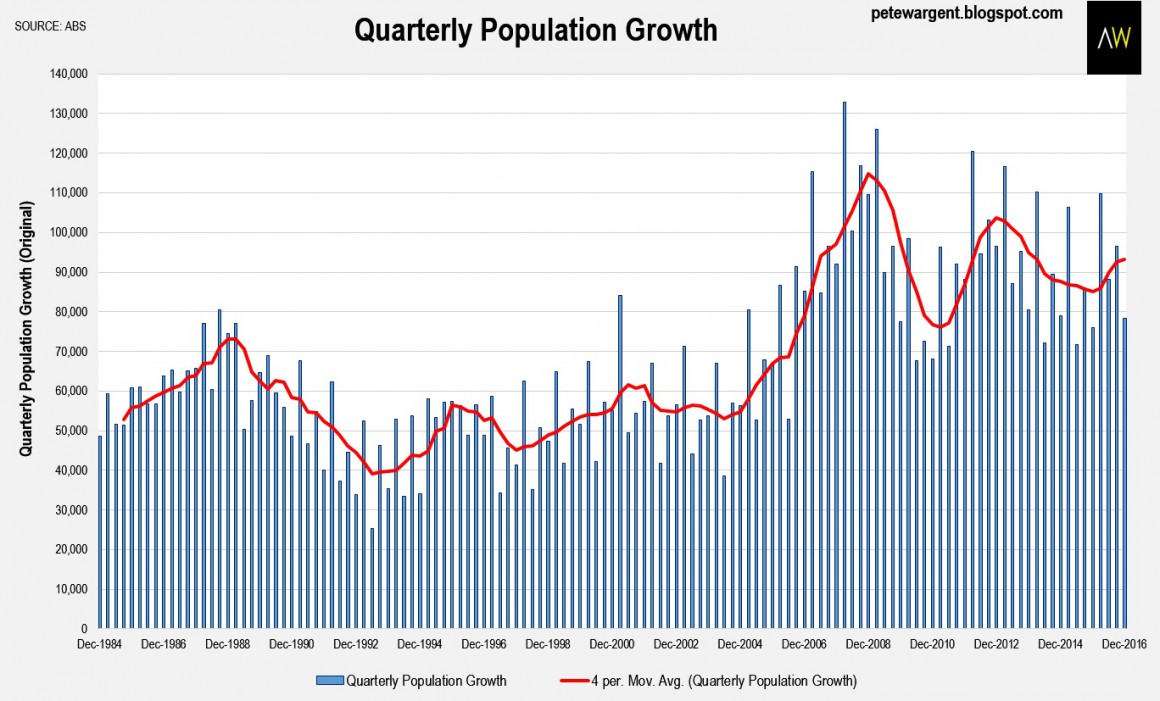 Only last week we thought the population was just passing 24.5 million. This has a number of ramifications, not least for calculations of apartment oversupply.

On Census night there were also more than 1 million dwellings vacant or 11.2 per cent of the total dwelling stock, up from 10.7 per cent in 2011.

The 2016 Census detail will reveal a range of fascinating information, which will be the subject of future blog posts.

Australia has now become much more Asian, with more of us born overseas, but fewer Aussies are identifying themselves as religious types

Somewhat surprisingly, only 7.2 per cent of households were paying 30 per cent of their income towards a mortgage, representing a sharp decline since the last Census, with the rise of interest-only loans a likely factor here.

So where is the the largest portion of the population making their mark?

It may come as no surprise – Sydney and particularly Melbourne are expanding their respective populations at a furious pace.

While net overseas migration into Western Australia has fallen all the way back to where it was before the resources boom, more immigrants are once again making their way to Sydney and Melbourne. 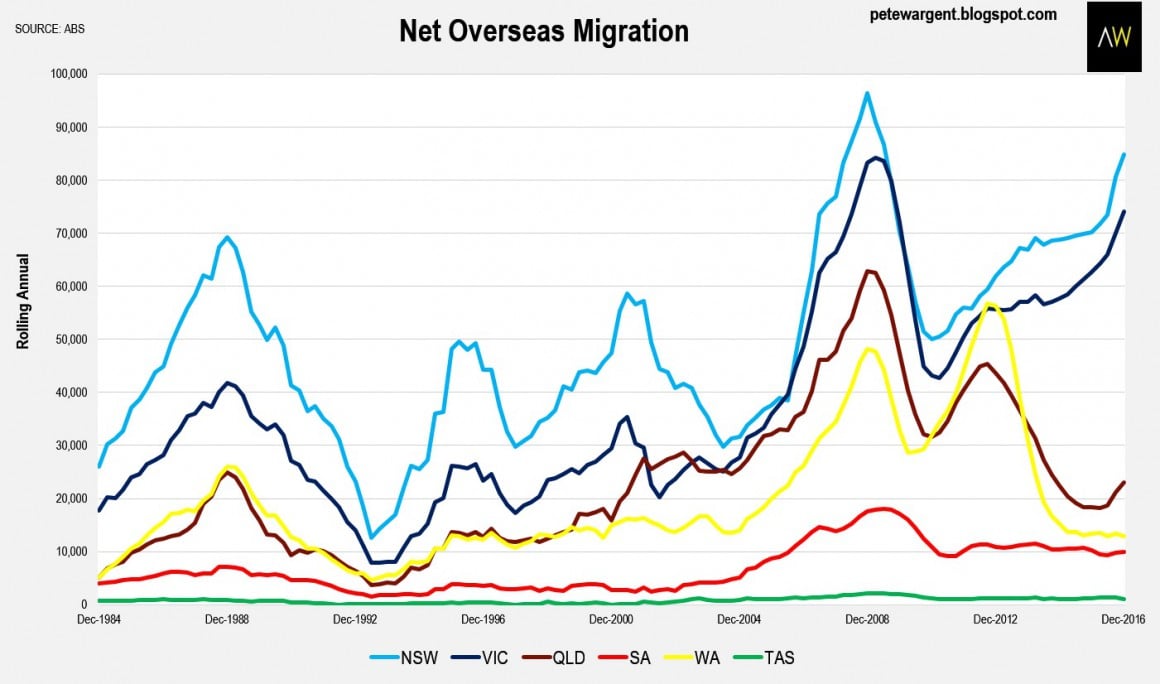 Meanwhile, folks are increasingly moving internally to Victoria from South Australia, Western Australia, and now even from Sydney, the net result being a population explosion in Melbourne.

Other internal migration trends include Sydneysiders ramping up their cyclical migration north to south-east Queensland.

With net interstate migration to the Sunshine State soaring to a decade high in the final quarter of 2016 this means that population growth is also now picking up again in Brisbane and at Gold Coast. 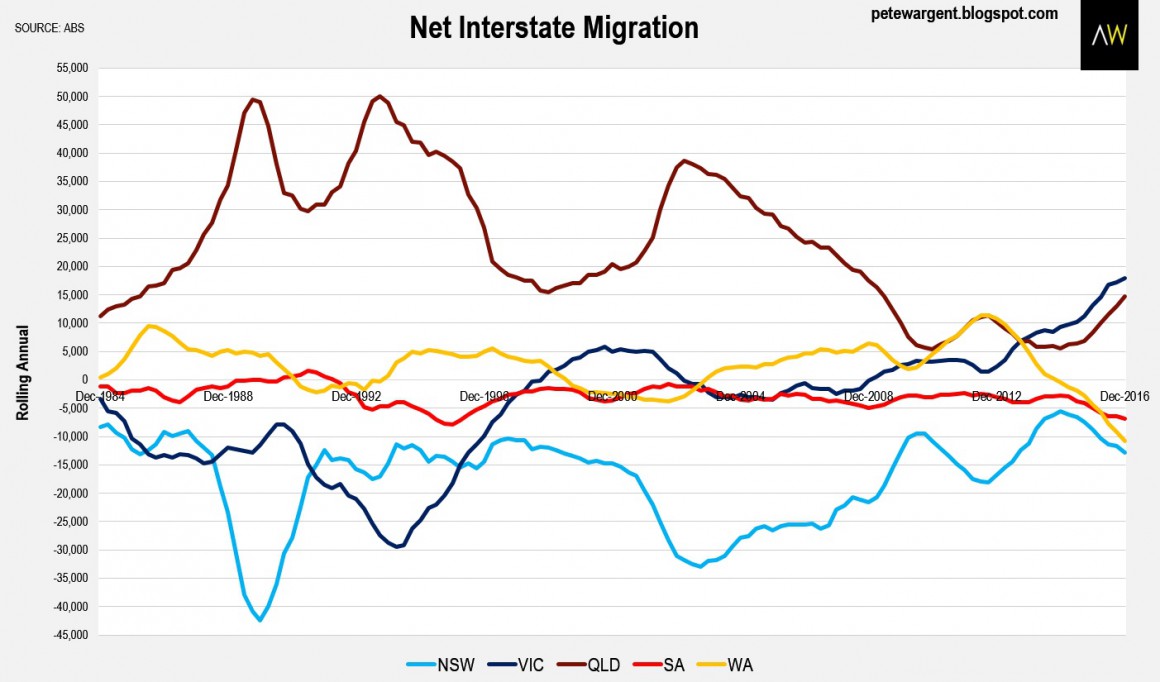 The population of New South Wales increased by +1.5 per cent to just shy of 7.8 million in 2016, but comparatively speaking the rate of population growth in Victoria was practically off the charts at +2.4 per cent.

Of the other states and territories only Queensland and ACT saw significant population growth at +1.5 per cent and +1.7 per cent respectively. 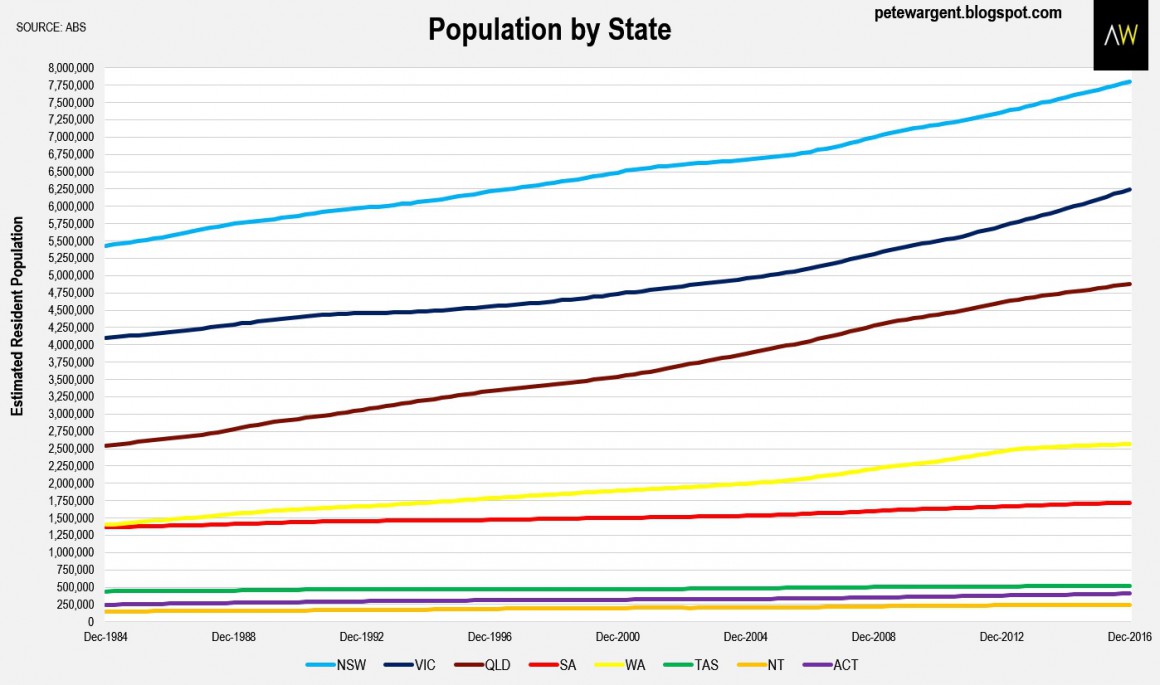 Adding in the natural population increase to the net internal and overseas migration sees Victoria’s population growth hitting a previously unthinkable level at +146,600 in 2016, which is extraordinary. 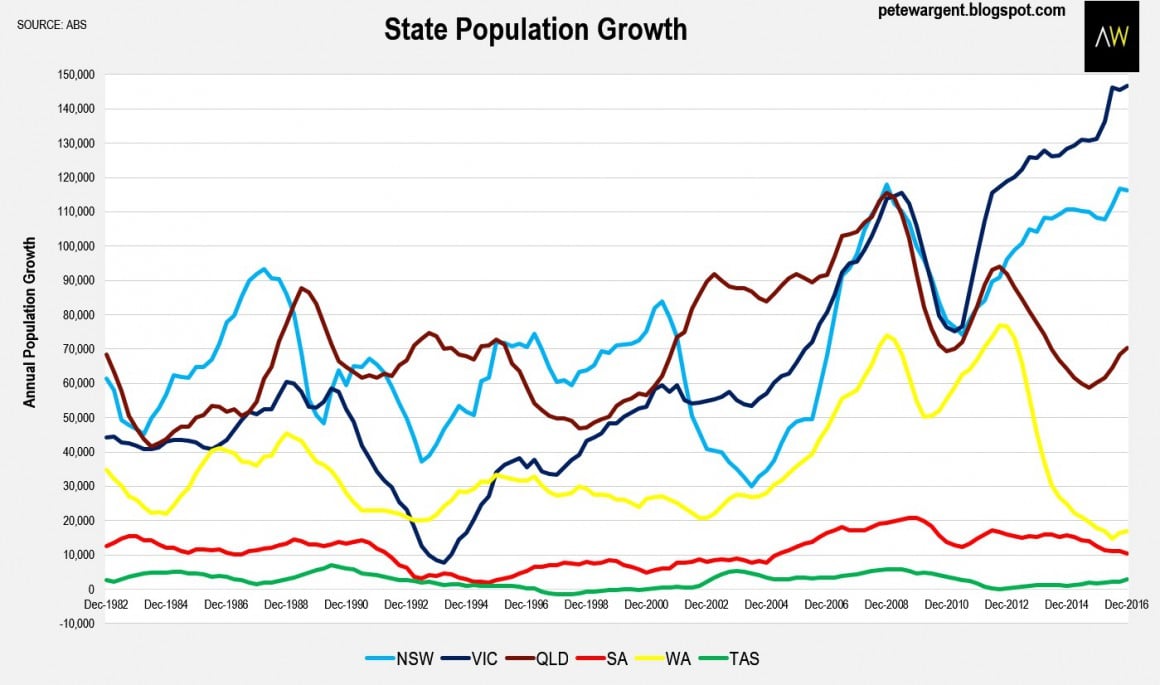 Splitting out the state population growth by calendar year shows just how big the leap in Victoria was in 2016, with Greater Melbourne and Geelong swallowing the bulk of the growth in headcount. 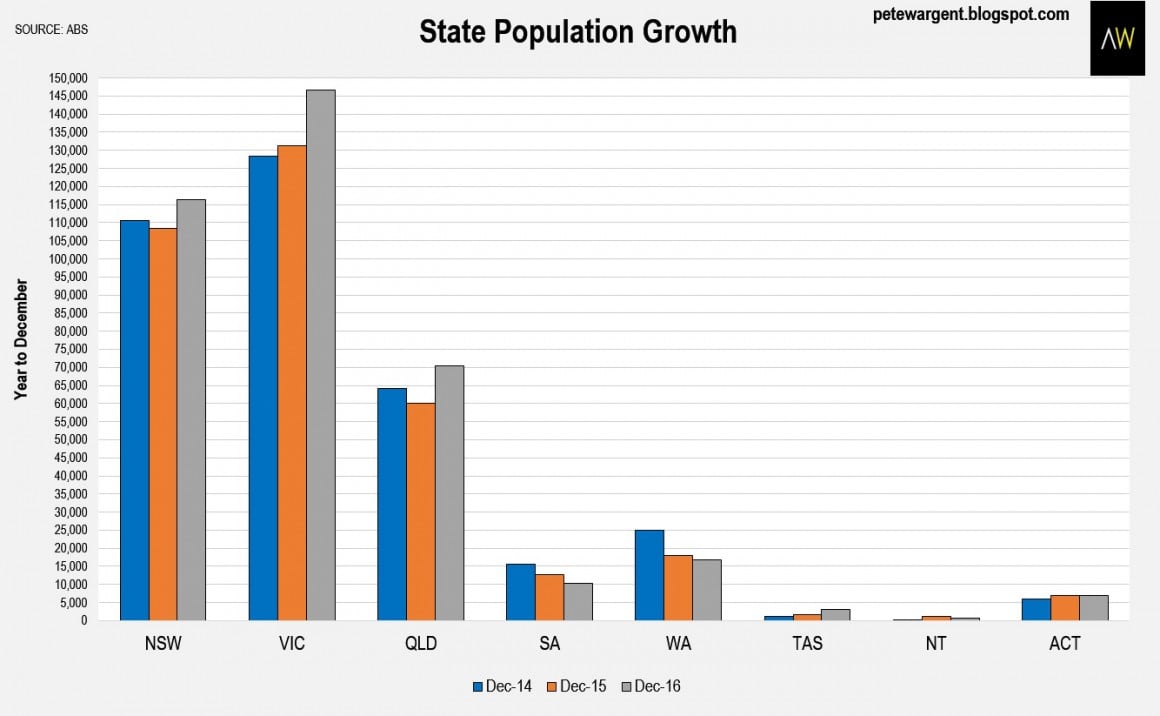 Overall, these population trends generally continued pre-existing patterns, but some of the trends appear to have intensified.

The “intercensal difference” calculated by the ABS represents the difference between the newly Census-based estimated resident population (ERP) and the previously carried forward estimates.

In Victoria the intercensal difference was absolutely massive at +108,700, while Western Australia saw the opposite result at -58,400.

This explains a lot about vacancy rates in the respective capital cities (which have risen sharply in Perth, but have tightened to 7-year lows in Melbourne).

Overall the national intercensal difference nationally netted off to +78,700, meaning that the population today is quite a bit higher than previously thought, now at about 24,570,000.

The three most populous cities in particular have seen their respective pace of annual population growth rising sharply, both cause and effect of the apartment construction boom on the eastern seaboard.

Both Victoria and New South Wales saw a record ~60,000 dwelling completions notched up in 2016, yet in the case of Victoria the rate of building has scarcely kept pace with romping population growth of +146,600.

'Population growing faster than expected' have no comments