Australia certainly stands out as an animal-loving nation with some of the highest rates of pet ownership in the world. 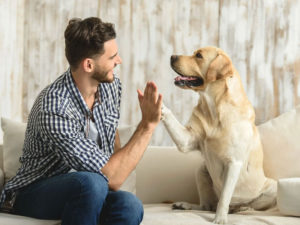 With around one-third of all households renting, what are the pros of a pet-friendly investment property?

And what are a landlord’s legal responsibilities?

A 2019 survey by Animal Medicines Australia found that 5.9 million households own a pet, and for those that don’t, over half would like to.

When asked what barriers prevent pet ownership, the main response was a lack of suitable housing.

In addition, the links between pet ownership and improved mental and physical health are now well documented.

As tenants, pet owners are often willing to pay a little more and lock in longer leases to secure a home for themselves and their fur-babies.

Yet only 10 per cent of rental properties currently allow tenants to keep pets, leaving a significant gap in the market.

Some landlords are taking the plunge and discovering the advantages of including pet owners in their pool of prospective tenants.

For others, they may want to dip a toe rather than jump right in.

Nowadays, it is not uncommon to ask for a ‘pet resume’ which can be used to help ease concerns about the risk of pet-related property damage.

Complete with photos, details of the pet’s size and breed, the resume acts as a reference check, providing landlords a sense of certainty when it comes to approving tenant requests for a four-legged friend.

As social attitudes are changing, so are the laws that outline the rights and responsibilities of landlords, property managers, and tenants.

Some states have taken the lead and updated tenancy laws to allow for more open and honest communication about renting with pets.

What you need to know

For states that are yet to move on any changes, there are already some clear guidelines and protections in place for landlords who allow pets in their properties...

Guest Author: This article was written by the team at EBM RentCover and was originally published here. EBM RentCover is one of Australia’s leading landlord insurance providers, protecting more than 150,000 rental properties across Australia.

Hi. Do you have any information about rules for NSW? It doesn’t seem to be listed. Thank you.