What lessons can you learn from those who made a profit in property last year? 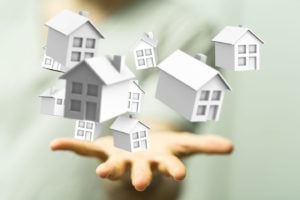 Or from those who sold at a loss last year?

While the world in property has changed turned on its head in the last few weeks, there are still lessons to be learned from the latest Corelogic Pain and Gain report which tracks who’s won and lost in property.

The latest report is for the December 2019 quarter, which was before anyone ever new about Coronavirus.

In this detailed article we look at where the pain and gains were experienced:

This means that  units are about twice as likely to sell at a loss relative to houses.

Every capital city and rest of state region had a higher portion of loss-making sales among units than houses.

Of the capital city markets, the highest concentration of loss- making unit sales was in Darwin, where more than half of the units sold at a loss over the quarter (61.3%).

Darwin is an extreme case, where 32.7% of houses also sold at a loss.

A significant factor contributing to the higher rate of loss making unit sales is oversupply, which puts downward pressure on rent yields and prices.

During the national dwelling market upswing between 2012 and 2017, investor demand in Australian real estate was particularly strong, making up 39.5% of the new mortgage market.

When interest-only lending was restricted in 2017, investor demand and credit fell away, leaving some unit markets over- supplied.

Completion data from the Australian Bureau of Statistics suggests 21,342 units were completed across Queensland over 2016, against a historic average of 11,585 per year.

This over-hang of supply has been progressively absorbed, as residential construction has corrected.

Most capital city unit markets were seeing improved conditions over the December quarter.

It is hard to say whether the economic  impact of COVID-19 will have a disproportionate effect on profits and losses in the unit segment.

Anecdotally, there are already challenges faced by investors, discussed in the next section, and ABS census data suggests a far higher portion of units are investment properties (64.4% at 2016).

Both house and unit stock should see a better trajectory when Australia’s economic operations return to normal.

Proportion of total resales at a loss/gain, houses vs. units, December 2019 quarter

Investors continue to be more likely to resell their properties at a loss compared to owner occupiers.

In the December 2019 quarter, 9.8% of properties owned by owner  occupiers resold at a loss, compared with 15.7% of investment properties.

Across each of the major regions, with the exception of Hobart and regional Victoria, a greater share of investors resold their properties at a loss than owner occupiers. 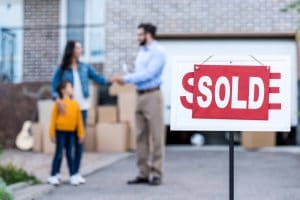 The largest divergence in loss making sales between owner occupiers and investors was in Darwin, where 37.1% of owner occupiers sold their properties at a loss, compared with 57.6% of investors.

The smallest gap was in regional  Tasmania, where very few properties  were sold at a loss across the board.

Both investors and owner occupiers  nationally saw a decline in the portion of loss making sales.

This taxation parameter alleviates some of the risk around property investment, and helps to support investor decisions to ‘cut their losses’. 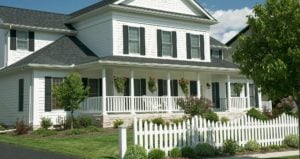 Investors may find occupancy rates are impacted over the coming months amid the COVID-19 slowdown, especially in rental areas with more exposure to heavily impacted sectors such as education, tourism and hospitality.

With the risk of rising unemployment in these sectors and progressively other sectors as new policies around social distancing or shutdowns are implemented, tenant demand may recede.

However, the comprehensive institutional response from the RBA, APRA and government will likely cushion these scenarios.

Essentially, institutions seek to maintain the current flow of employment, rental income and mortgage repayments to minimise structural changes to the economy until things return to their previous operating conditions.

Proportion of total resales at a loss/gain, owner occupied vs. investors, December 2019 quarter

Nationally, profit making sales in the December quarter had a median hold period of 9.5 years, while loss making  sales where typically held for 6.3 years.

This was slightly different for houses and units. 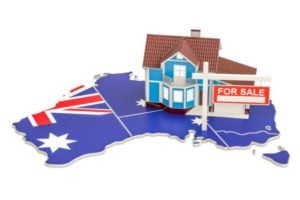 The region with the shortest hold period for profit making sales was regional Tasmania, where profit making unit sales were held for 6.6 years, and returned a median profit of $94,250.

This is unsurprising given the high growth rates in parts of the state.

The Launceston & North East saw nominal unit value increases of 32.8% over the past 6.6 years

The following chart shows the typical yields of properties sold in the December 2019 quarter by hold period.

Like equities, property assets held for long periods of time have made significant gains despite historic economic shocks and market cycles.

For those who can afford to, it may be worthwhile trying to hold property through the current market conditions, and allow property values to recover from a pandemic-induced slowdown. 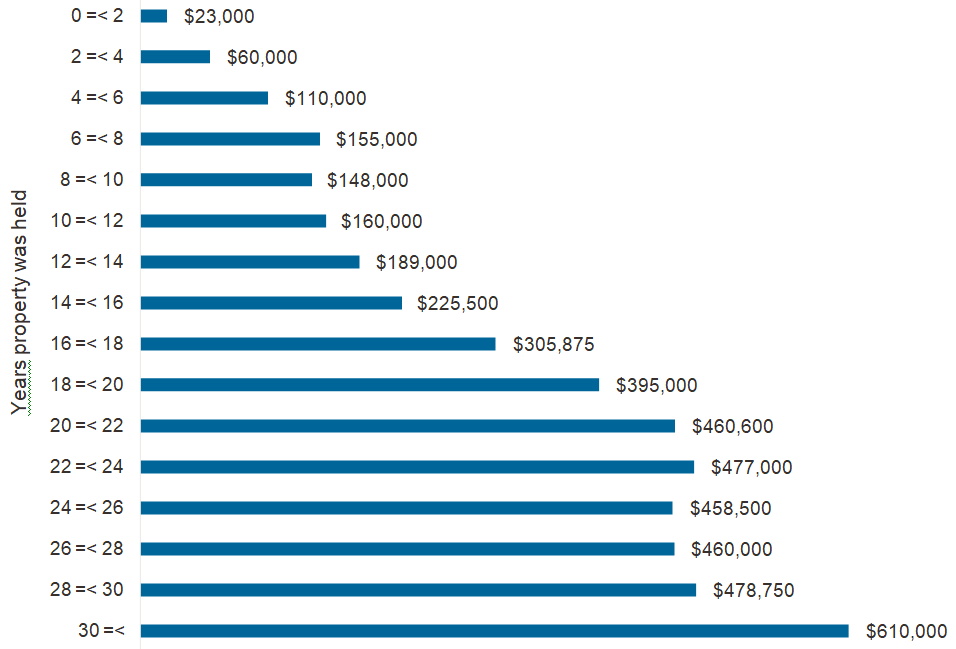 Median hold period (in years) of resales at a loss or gain, houses vs. units, December 2019 quarter

Pain and Gain in Sydney

Sydney dwelling values increased a further 6.2% in the December 2019 quarter, following the start of a sharp uplift in prices from June.

This contributed to the increased  level of profit making sales. However, December quarter result is still below the decade average, where 94.7% properties sold at a gain.

The median gain of profit making sales across Sydney in the quarter was $360,000.

The typical hold period of loss making sales was just 3.3 years, capturing one of the longest and largest property market downturns in decades.

When aggregating  up to council regions,  the highest portion of loss making  sales was the Hunters Hill region  (17.1%), albeit  off a relatively low sales volume.

It is also noteworthy that while Hunters Hill had the highest portion of loss making sales, it also had the highest median profit, demonstrating strong growth in the area longer term.

As with last quarter, the highest portion of profit making sales was in Mosman, where 97.9% of properties made nominal gains at the point of resale.

This also reflects the recent gains concentrated in the high end of the Sydney market. 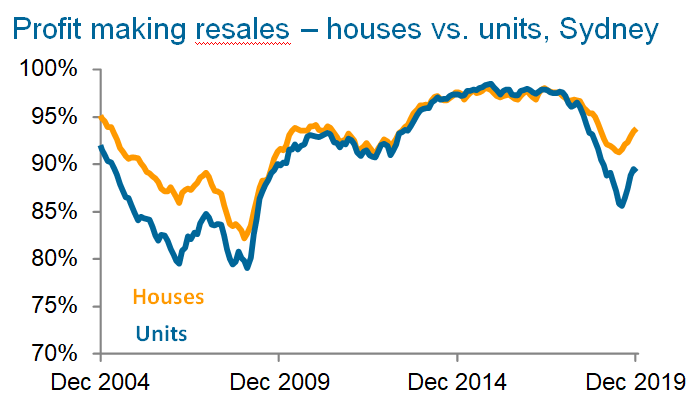 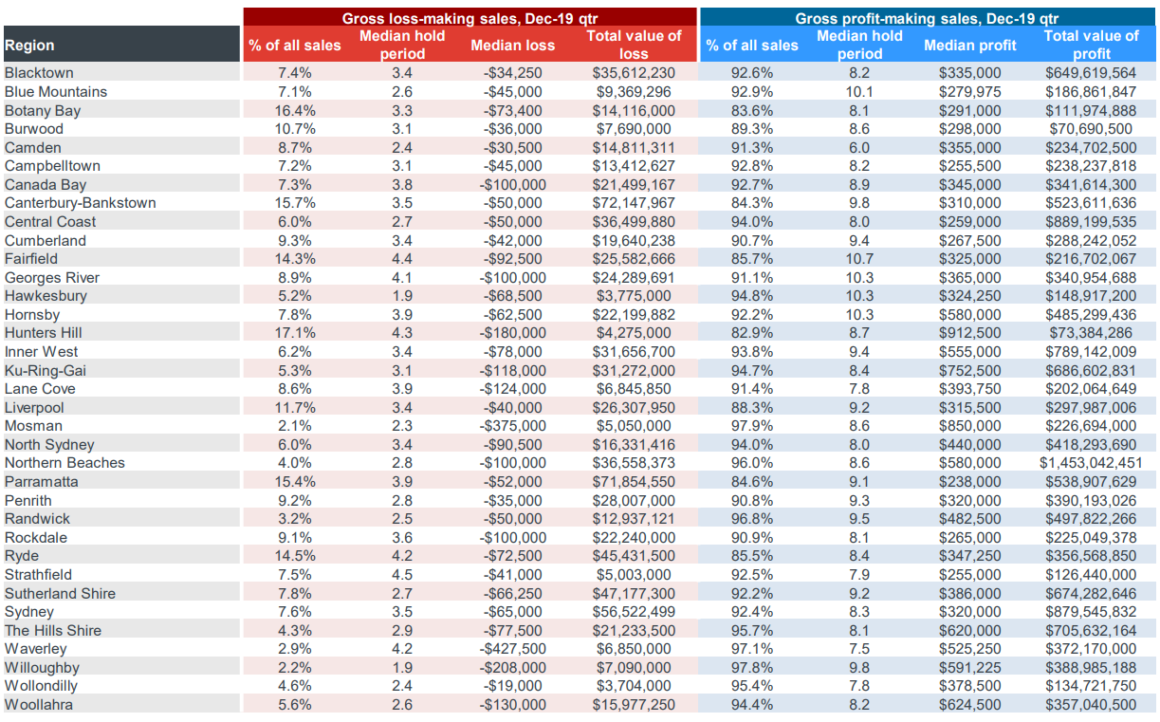 94.2% of Melbourne properties resold for a profit in the December 2019 quarter. 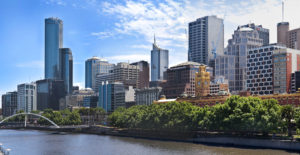 This was the second-highest result for the concentration of profit making sales behind Hobart.

The portion of profit making sales is an increase on the previous quarter (which was 93.0%), and comes off the back of value gains across the Melbourne dwelling market of 6.1%.

The dynamic of loss making sales across Melbourne are different to the Sydney property market.

There were 904 loss making resales across Melbourne analysed in the December quarter.

Of these, the majority were owned by investors (61.8%), and the loss making sales were relatively concentrated across 142 suburbs.

The highest portion of loss making sales was in the City of Melbourne council region, where 33.0% of properties sold at a loss.

This has trended down from the previous quarter (32.9%).

This reflects many of the same dynamics discussed in the previous quarters’ report, where the vast majority of these sales were investor-owned unit stock.

More pressure may be put on investor-grade unit markets in Melbourne over the coming months.

This is because short term and student accommodation will be in less demand amid travel bans, where Melbourne is otherwise a city that attracts high levels of international migration.

The highest level of profit making sales in the December quarter were concentrated in Cardinia and the Macedon Ranges, with each region seeing 98.7% of sales make a nominal gain. 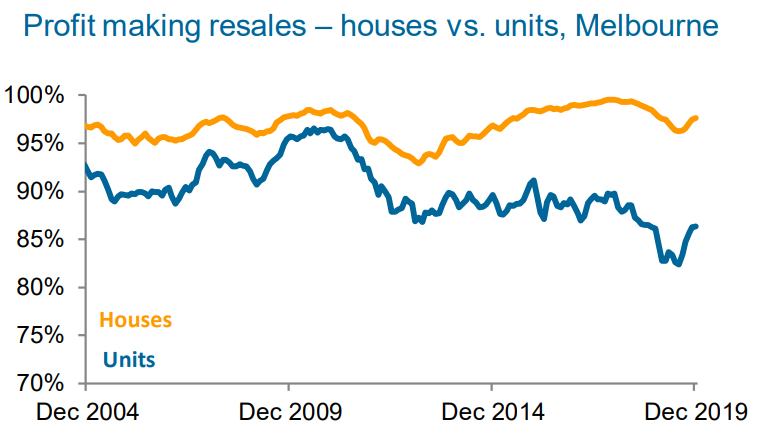 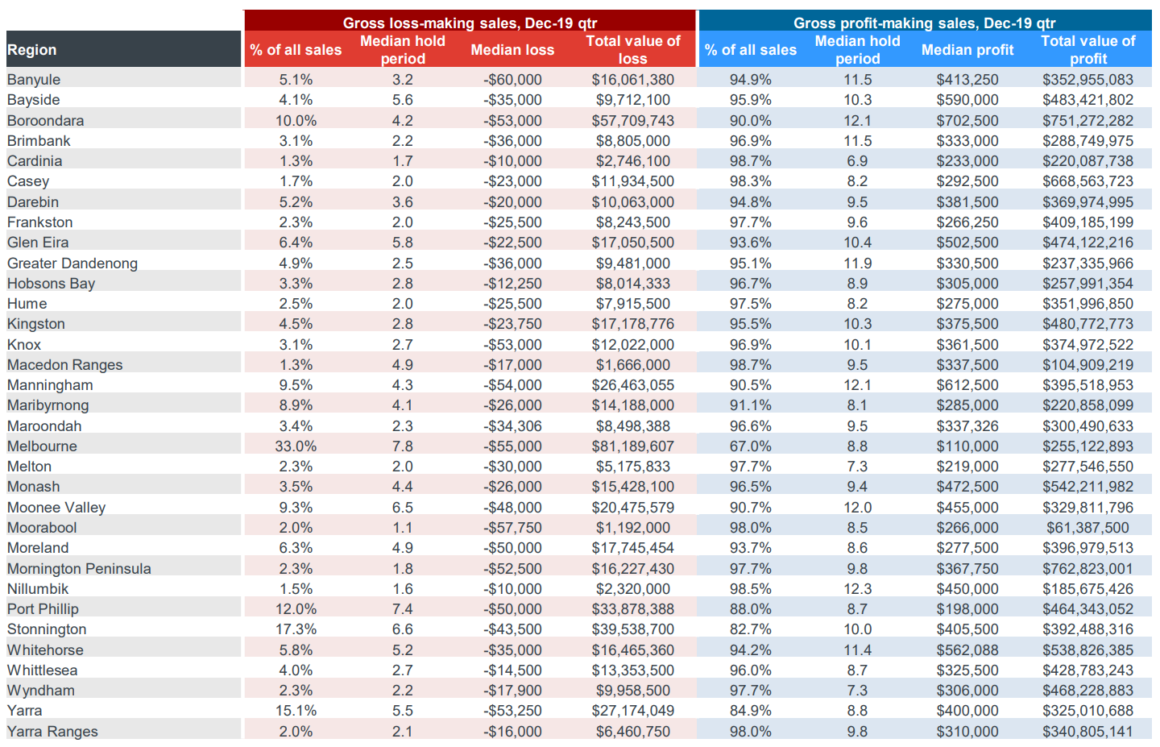 Over the December 2019 quarter, profit making resales across the Brisbane housing market had generally increased.

Profit making sales comprised 88.7% of resales, up from 88.1% in the previous quarter.

The higher portion of loss making sales relative to Sydney and Melbourne is largely due to subdued performance in the unit market, where 35.2% of units sold at a loss compared with just 4.7% of houses.

A similar dynamic is reflected across the local government areas of Brisbane.

In the Brisbane city council 13.6% of resales incurred a loss in the December quarter, 84.9% of which were units.

The portion of loss making sales improved slightly on the previous quarter, where 13.9% of sales  made a loss.

The Brisbane unit market is another area where travel restrictions  and slowed  business activity will likely  disrupt the recovery trend of the Brisbane unit market, but low interest rates and high levels of affordability may see a sharp uplift in demand once the virus has been contained.

The Somerset council region had the highest portion of profitable sales over December, at 93.8%.

Profitability in the region is reflective of slow and steady growth, where the median profit was the lowest of council areas analysed, but hold periods relatively high. 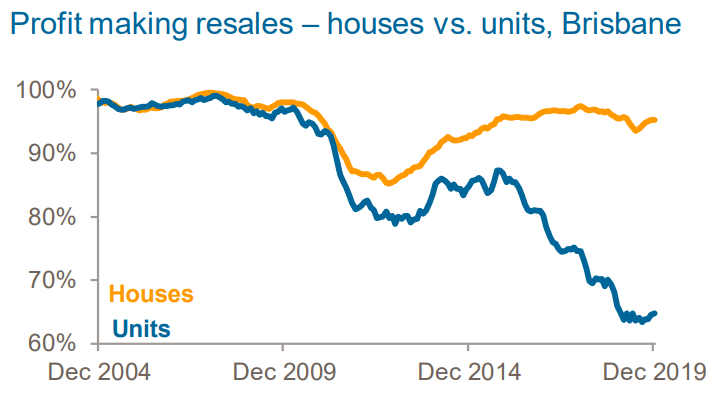