As someone interested in property investment what’s really happening with the supply an demand ratio for property should be of interest to you.

For some time we have argued that the housing market was largely balanced, rather than under-supplied as many economists agreed.

Our key point was that housing had become better utilised.

That is, the number of people per dwelling had actually risen slightly in recent years.

Given that Australians had been building bigger and better homes over time, it had to happen sooner or later. The number of people per dwelling had consistently fallen for almost a century, while at the same time home size had continued to lift.

Well the Reserve Bank has weighed into the argument and delivered a similar judgment. The RBA says that demand for homes has indeed grown at a slower pace than in the past: “…over the past decade the number of households has no longer been growing faster than the population. So for a given rate of population growth, the demand for housing would seemingly be growing more slowly.”

But while there are more people in our homes, the RBA says this wasn’t the only factor affecting housing demand: “demographic factors are clearly important in explaining the average household size levelling off, but…the increase in the cost of housing also seems to have played a role.”

The Reserve Bank has also looked at other factors influencing housing demand, highlighting lower interest rates and tight rental markets, on the one hand, with the recent aversion to debt by households, on the other hand.

Overall the RBA concludes that home building will probably rise over the next year, but only slowly: “it looks likely that dwelling investment will pick up at a relatively moderate rate in the medium term.”

But if home building remains weak at the same time that mining investment comes to a peak, the RBA may need to consider further rate cuts in order to get the economy moving. 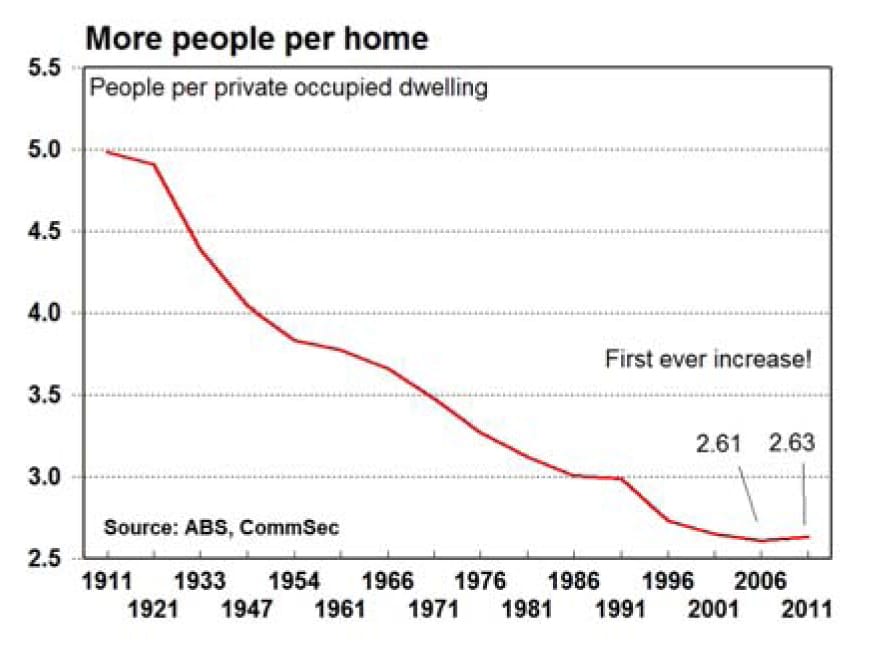 'Oversupply or not? An important question for property investors' have no comments