There are two markets in Australia that, in reality, set the pace for housing markets across the country – Sydney and Melbourne.

These two markets combined account for more than 50% of all dwellings in Australia.

Graph 1 presents the current position for Australia’s main markets – Sydney and Melbourne, for houses and units. 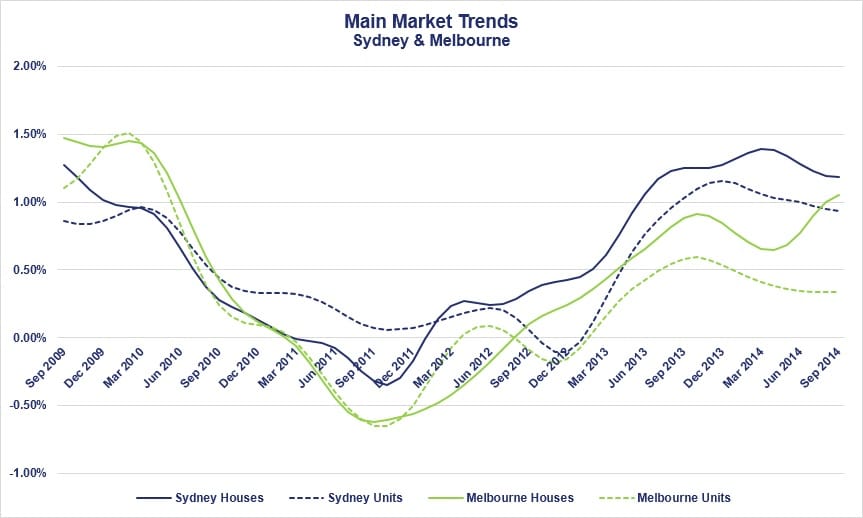 The data for the unit markets in Sydney and Melbourne is pointing to a slowing.

The trend in Melbourne’s house sector is going against the trend, which is a little concerning.

Growth in this segment has been in excess of 4% in the last two months, which has come on the back of a slowing that was greater than any other market during the winter period and last summer.

It is possible that this market is simply in a ‘catch-up’ phase, but should this growth pattern continue then there are some real risks that this growth phase will be followed by some significant adjustments.

The resource states (Brisbane and Perth) are following a similar pattern to Sydney, however their growth cycle has been small and these assets are producing growth rates that contradict the hype about a ‘property bubble’ or ‘boom’ (see Graph 2 below). 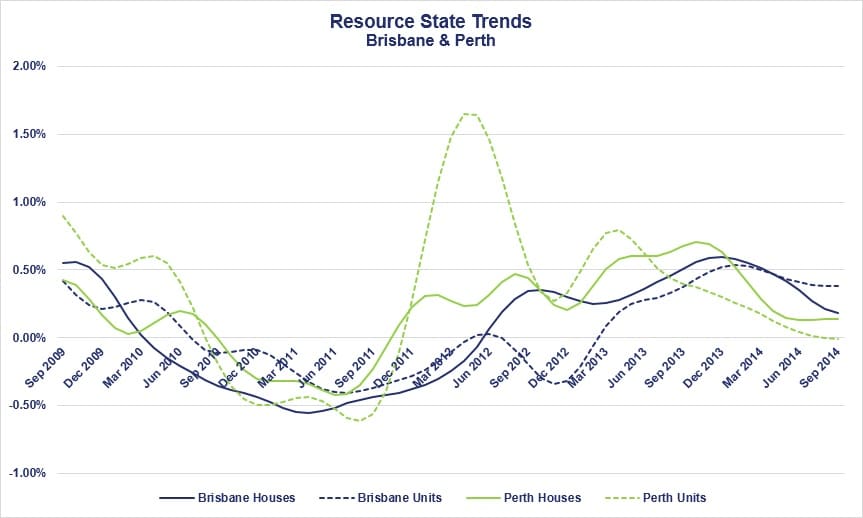 The year to September 2014 has produced growth rates higher than we have seen for a number of years, however they are relatively small in comparison to what was achieved in past periods of strong growth.

In addition to this, growth in housing prices has been greater than wage increases and as a result, affordability continues to become more difficult.

Unaffordability has now reached a level where first home buyers are largely excluded from the market, and the main central dwelling areas of capital cities are becoming the “home” of investors who are providing rental accommodation for the younger population.

The relatively low after tax spending power numbers in the table represent a natural limit on further house price growth for the home owner.

The high level of investor activity is hence both needed and a direct result of this fact.

Growth predictions over the next five years are around 4% and 2% for Australian-wide houses and units respectively.

These predictions are lower than what was anticipated earlier in the year.

This is a consequence of the larger than expected rate of growth in the last 12 months and the increasing unaffordable nature of the market.

However, these predictions are significantly lower than the average growth rates achieved over the last 20 years. 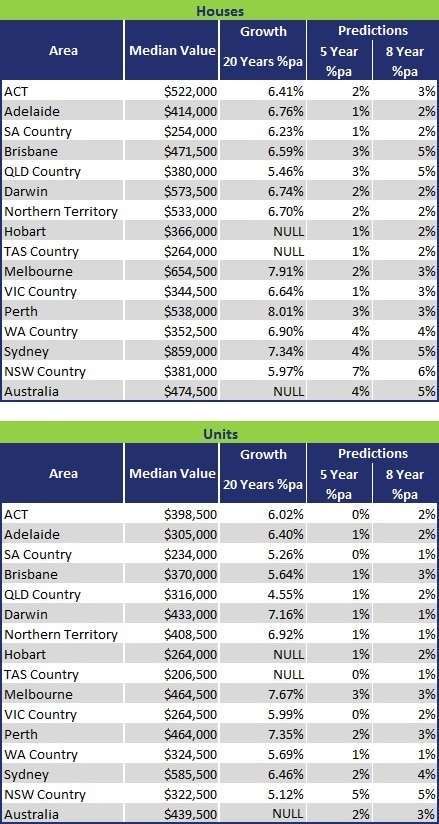 The index suggests that our markets should be adjusting as they are (see Graph 3). 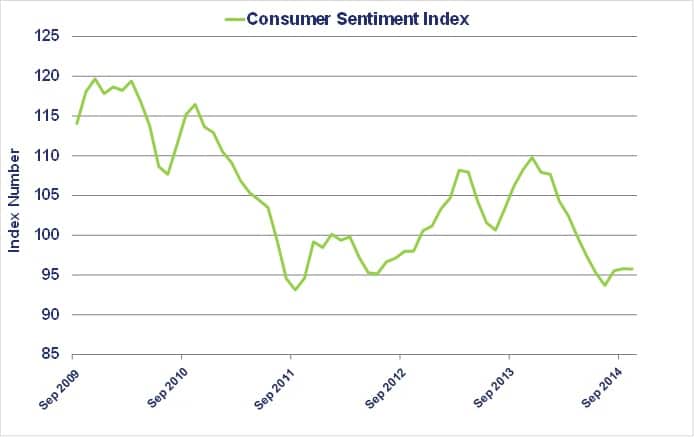 The September results (in the below table) indicate that, other than in Sydney and Melbourne, market performance is lacklustre.

Sales activity on a national basis, while higher than it has been since the first quarter of 2010, is still less than its peak achieved in July 2002 when annual sales were in the order of 572,000 dwellings. 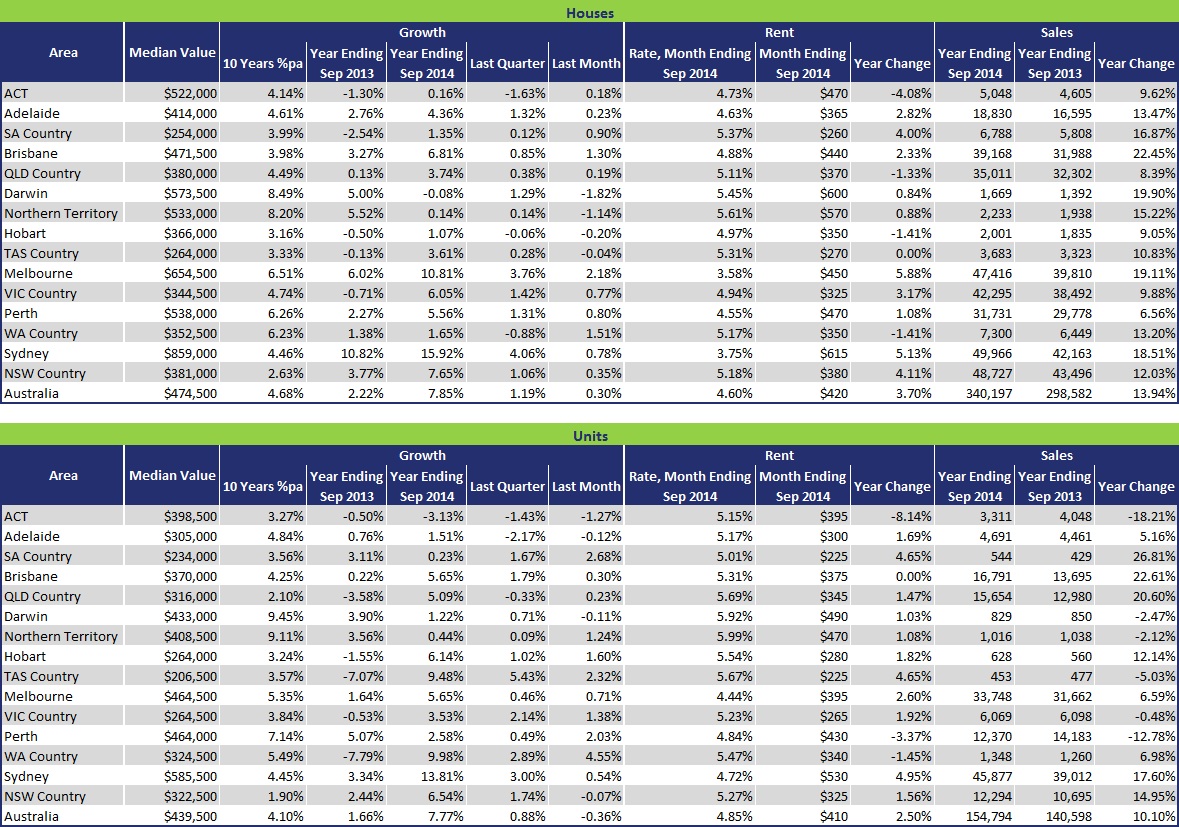 Rental yields are reducing as a result of house price growth, however, dollar weekly rents are increasing at a rate above inflation.

In my view, this will continue given the likely increase in rental demand due to the lower levels of ownership affordability.

Unfortunately, the affordability of rent is also moving to an unacceptable level – a comfortable rental cost is less than 30% of after tax household income (see Affordability Table).

The statistics show that families who are renting are having a very limited ability to save a deposit for a family home.

This position will drive homeownership further away from the next generation and cause those residing in capital cities to be renters.

On a final note, please take care with your property transactions and don’t over leverage – now is not the time to be excessively aggressive.