Today I’d like to discuss the concept of buying the correct property and the importance of doing a survey.

Let me tell you a little story…

Two men purchased adjoining properties in a quiet suburban street in Brisbane and owned them alongside each other for about 10 years.

One of the gents purchased the property (Lot 22) as his home and spent about $60,000.00 renovating it over the previous 18 months.

He was impressed by what a difference this made to the look and value ($100,000.00) of the property compared to his neighbour (Lot 23) who lived in Sydney, and had rented it out the whole of his 10 year ownership, spending nothing.

Tired of the complaints from his tenants and the continued advice from his letting agent that he needed to start spending money on the property to keep his tenant happy, the chap from Sydney decided to put his property on the market for sale.

He was a motivated seller, had substantial gain in the property as he had held it for a good 10 years and quickly secured a sale at a price he was comfortable with.

They owned the wrong properties!

During the course of the Buyer’s solicitor’s investigations of the property it was revealed that neither of the two men owned the property that they thought belonged to them.

They had each mistakenly acquired each other’s property.

How did this occur?

The properties were in a long street where all of the lots were the same size and shape (rectangular 800 square metre blocks) and there were no cross streets or side streets within a dozen houses from each of the properties.

When you looked at a plan of the street from the Titles Office it showed no cross referencing to any streets for close to 150 metres from each property.  The only way to properly determine whether you had actually bought Lot 22 rather than Lot 23 was to do a survey.

With the co-operation of both owners this problem is relatively easy to solve. 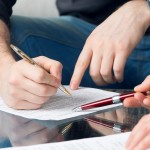 Both owners would simply sign Transfer Papers which would be lodged with the Stamp Duties Office and then the Titles Office to record the correct ownership of the properties i.e. each owner would transfer their property to their neighbour.

If the Stamp Duties Office were satisfied this was a genuine error no stamp duty would be payable and there would be no serious expense involved apart from hundreds of dollars for legal fees.

The goodwill of one of the neighbours however dissolved and his co-operation was not forthcoming when he realised that he actually owned a property that was worth $100,000.00 more than the “dog box” that he was now trying to unload 10 years after he bought it.

He now refused to co-operate in the mutual transfer of the properties.

How could he have avoided this mistake as an investor?

After reading this story some of you might be quick to claim that this must be the solicitor’s/conveyancer’s fault.

Not so.  Rarely would this be the case.

The legal profession follow a simple practice in conveyancing which if adhered to and understood by the investor would have avoided this dilemma.

Your conveyancer will send you before settlement a copy of the Titles Office Plan showing your block and ask you to identify that this is the correct property.

Usually it is possible to do so by looking at this Plan.

Here though, where there was no cross referencing to streets for long distances and all blocks were the same shape and size, the only way to tell for certain that you were buying the correct property was to undertake a survey.

It is very common practice among solicitors / conveyancers to advise you when sending you the Plan that if you cannot identify the property then you must instruct them to commission a survey on your behalf.

A Surveyor can identify the properly correctly.

So the moral of the story is this…

Understand too that the onus is on you to identify the property.  If there is any doubt, you must commission a survey.