A negative outlook for the Australian economy over the next 12 months causes decline in July business confidence.

Roy Morgan Research’s Business Confidence declined by 2.5 points in July (down 2.2% to 112.3) mainly due to their poor economic outlook  for Australia over the next 12 months.

The decline in confidence follows the same trend as the ANZ-Roy Morgan Australian Consumer Confidence between June and July.

This shows that confidence for consumers and businesses is fragile and easily impacted by both local and international events.

These July figures are the result of 905 interviews with all types of businesses across Australia.

Although business confidence declined in July, there were some positive areas, these were mainly to do with how businesses felt about their own financial position over the last 12 months and their prospects for the year ahead. Another positive indicator is that 57% of businesses now think the next 12 months would be a good time to invest in growing their business.

This is a little above the five-year average of 56% but below the June result of 59%. 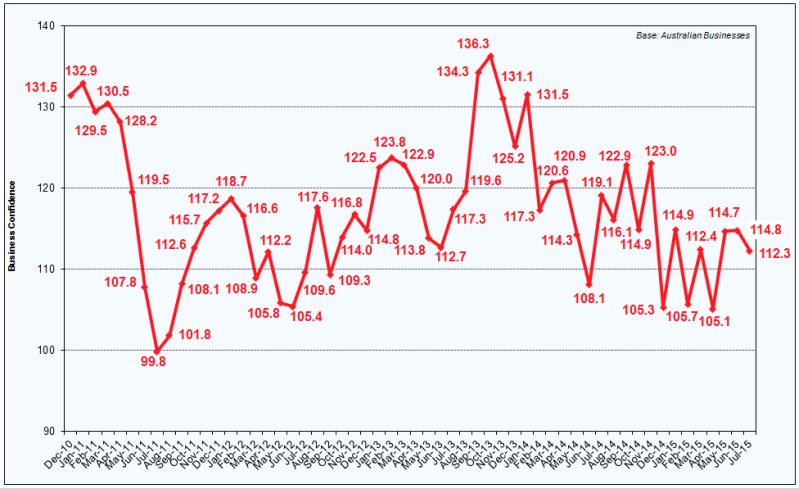 Clearly the major negative factor impacting on business confidence in July was the big increase in the proportion of businesses considering that the economic conditions in Australia over the next 12 months would be bad.

“While there were some positive external factors impacting on business and consumer confidence during July — such as reduced anxiety over the Greek financial problem, less publicity about China’s slowing growth rate, and share-market volatility — the basic problems concerning the local economy remain.

“In Australia there are still major headwinds, including the low iron ore price, no resolution to the worsening budget deficit, and the fact that over two million Australians are either unemployed or underemployed. The end result of these and other problems has been a large decline in the Roy Morgan Government Confidence Rating (GCR) among consumers, which has dropped from 99.5 in July 2014 to only 91.0 currently. This drop in rating is mainly due to the fact that nearly half (46.5%) of the  population now consider that “things in Australia are heading in the wrong direction”, well up from 41.5% 12 months ago.

“Despite continued hope that the mining sector’s decline will be made up for by growth in a number of other key industries, below-average levels of confidence in manufacturing, agriculture, accommodation and food services, health care and personal services suggest that this is not happening to quite the extent anticipated. The all-important construction industry remains around average and is not showing any real signs of improved confidence. The industries showing above-average confidence include finance and insurance, rental and real estate, and the wholesale trade.

“Business confidence across states remains fairly even, with Tasmania narrowly ahead, followed by NSW, Victoria, Qld, WA and SA.

“Despite recent government tax incentives for micro and small businesses to invest, it is concerning to see that micro-businesses in particular show no real improvement in confidence, and remain well below the level of confidence of medium and large businesses.”