Figures released by SQM Research this week have revealed the number of residential vacancies climbed up across the nation in May 2015, with a vacancy rate of 2.4% posted based on 71,970 vacancies, up from 2.3% in April when vacancies were 69,295.

The biggest rise was recorded in Perth with a monthly change of 0.4 percentage points from April.

Over the year, vacancy rates in Perth have continued to climb with a significant 1.1% jump from this time last year.

Year-on-year, vacancy rates are down for Canberra, Melbourne and Hobart.

Canberra has posted the biggest yearly fall in its vacancy rate from 2.3% to 1.9%, reflecting the tightening of the market post downturn.

Hobart has also recorded ongoing yearly falls with vacancy rates dropping from 1.8% to 1.5% in May 2015.

Notably, SQM Research data records falling asking rents in Perth, Canberra and, in particular Darwin, which has recorded a fall in asking rents of 13.5% for houses and 5.7% for units for the past 12 months.

In contrast, Melbourne has recorded a rise of 3.3% for houses and 2.1% for units.

SQM continue to record ongoing, yet gradual rises in rental vacancies across the country.

This has resulted in an overall stalling of weekly market rents without capital city asking rents recording largely unchanged rents for the last 12 months.

Holiday locations appear to be bucking the trend.

The Gold Coast for example is recording rental increases of around nine percent, year on year.

The is the fastest rental growth seen for The Gold Coast since the 1980’s. 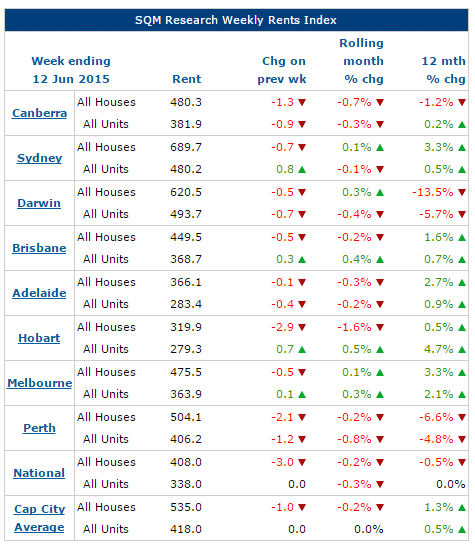 'National Vacancy Rates Continue to Rise' have no comments