Millennials feel more positive sentiments about their financial future and about investing compared to older generations.

In fact, recent survey results show that 65% of Millennials feel confident about their future finances, compared to 52% of Gen X, 50% of Baby Boomers, and 59% of the Silent Generation.

This is not a surprising find, as one of the defining traits of the Millennial group is high self-confidence.

While this survey was conducted in the USA, it’s likely a similar result would occur if it were conducted here.

The problem is that this confidence seems to conflict with other survey findings.

In reality, it looks like many Millennials could still have a steep learning curve ahead of them in the financial realm.

I recently wrote a blog comparing how financially savvy GenY’s are compared to their Baby Boomer parents.

According to the latest RaboDirect Financial Health Barometer, an annual survey of the financial habits of more than 2000 Australians, less than 15 per cent of Gen Yers had savings that would last more than six months if they lost their jobs.

Visual Capitalist created this infographic of the findings of the American Black Rock Investor findings: 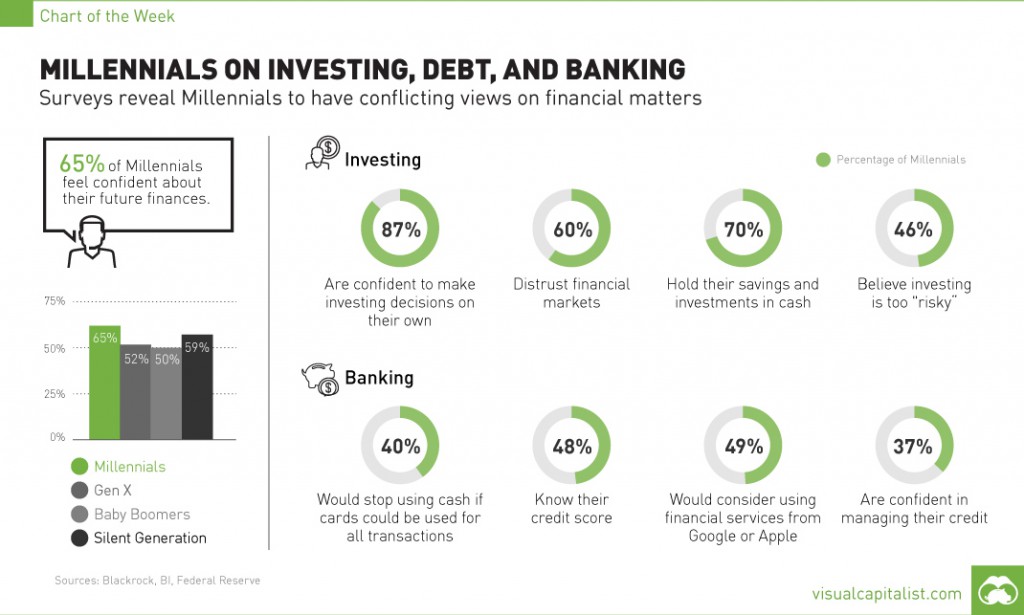 The first red flag is with debt.

Only 48% of Millennials know their credit score, and just 37% are confident in their ability to manage their credit.

Millennial student debt is at sky-high levels, and many are struggling to pay.

Another potential concern arises with the generation’s attitudes towards investing and building wealth.

Despite their confidence in their financial future, 46% of Millennials think investing is “risky”, 60% distrust financial markets, and a whopping 70% hold their savings and investments in cash.

While there are some reasoning for these numbers individually, as a whole they seem to paint a broader picture that Millennials are afraid of entering the market in any capacity.

As a result, it would appear that they hold onto their money in cash while interest rates are at their lowest in human history.

Historically, the middle class has built much of their wealth through investing.

Millennials also have unorthodox views on cash and banking.

As a generation of people that grew up in the digital age, 40% of Millennials would stop using cash altogether if cards could be used for all transactions.

In contrast, only 16% of people in older generations would consider a similar move.

'Millennials on Investing, Debt, and Banking [infographic]' have no comments