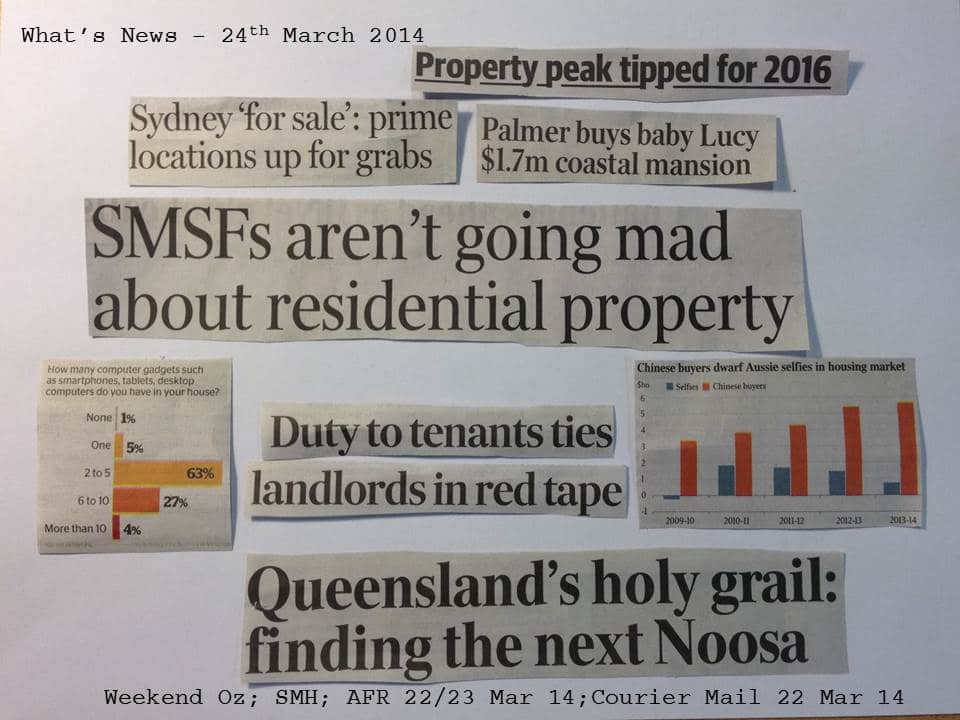 Property peak tipped for 2016 – SEQ property market is set to peak in the next 2 years & the Sunshine Coast is shaping up to be a star performer.

PRDnationwide MD Tony Brasier says SEQ is likely to ‘boom’ over the next two years.Michael Matusik agrees to disagree – things are improving, he says, but boom is too strong.

“I think we’re going to see a recovery and that would be better than boom conditions.”  Typical Matusik, what a party-pooper!

Sydney for sale – three prime sites on the northern side of Sydney Harbour have been earmarked for long-term lease & development, and are being marketed to overseas investors by the Sydney Harbour Federation Trust.

The sites, one at North Head and two within Headland Park at Mosman, are currently being advertised on a Chinese website, with one available for purchase.  The NSW Government claims this is an error.

I started humming Slap Leather* (a more recent James Taylor tune) for some reason when I read this article – just replace Chinese for Japanese – “Open up the door and let the shark-men feed, Hoover of the future in the land of greed.  Sell the Ponderosa to the Japanese, slap leather, head for that line of trees, yeah.” [sam id=41 codes=’true’]

Clive Palmer has added to his property empire by buying another mansion on Queensland’s Sovereign Islands – this time for baby daughter Lucy – born last December.The purchase: reportedly $1.7 million for a 4 bedroom, 4 bathroom waterfront spread with 180 degree views of the Gold Coast Broadwater.   What no dinosaur? Poor Lucy!

SMSFs aren’t going mad about residential property – that’s a myth, according to Credit Suisse.  While they put just over $1.4b into that asset class in 2012-13, estimates are they will invest only half that amount in 2013-14.SMSF investment in Australian residential real estate is being dwarfed by some foreign players such as those from China.

Supports what I am seeing on the ground – big promises of a pain-free property purchase via SMSF is the bait – the hook is a “wealth-health check” but most haven’t got the structure-right or resources to buy anything much at all.  But man does it attract a crowd, earn some quick fees & help build a database.

Lucky 1%!  Be honest now, how often have you texted your partner or kids about something – like dinner’s ready – when you are all in the same house?  I used to arc up about such stuff, now I do it too.  gr8 2cu read this far.

Finding the next Noosa – while Qld’s Treasurer is busy spruiking the state as on track to being the fastest-growing economy in Australia in 2014-15, there is a healthy appetite growing by those seeking waterfront bargains along some of Queensland’s lesser known beaches.

Population growth has slowed in the past five years, but there are signs of resurgence – business confidence is returning & rental yields are holding firm.  Beware; the sharks are already leaving water.

They can, according to David Attenborough, survive outside of their usual aquatic environment for short periods of time.  They like it best on land during a rising king tide.

Getting their timing right can be tricky.  A rising tide provides the illusion that they are quite safe & can travel further from shore than prudence would otherwise dictate.

Sadly most land sharks, along with their prey, get caught high & dry.  This activity, named after a pretty north facing beachside community in Queensland, Australia, is often called, doing a ”Noosa”.

……..
Michael Matusik will be presenting at the National Property and Economic Update seminar in Brisbane on 29th March. Click here now for full details and to reserve your seat.