The APM Rental Report for the March quarter shows that rents around Australia are either static or have slid backwards in every capital city except Sydney and Melbourne.

The rest of the country had no rental growth or falling rents. 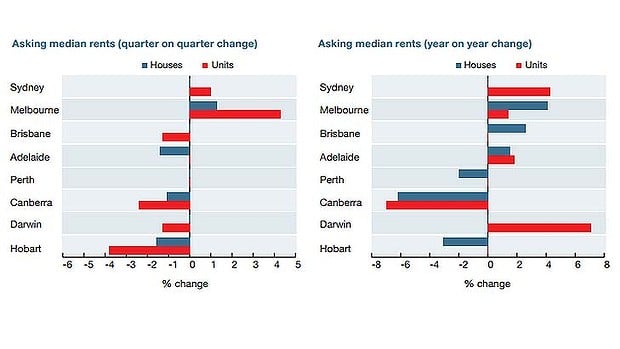 When considered nationally, the median weekly rent for houses increased only fractionally – by 0.2 per cent – over the quarter, while unit rents grew at a slightly more healthy 1.7 per cent.

‘Choppy capital city rental market performances over the March quarter reflects to some degree the uplift in home-buying activity which was driven by sharp improvements in housing affordability over the past year.

The big story in Sydney’s rental market is that the median weekly rent for an apartment is catching up fast to that of houses, the report says. There is now only $10 a week difference between them – $500 a week for houses versus $490 a week for apartments.

Sooner rather than later this year apartments would be as expensive to rent as houses.

This was ‘‘driven by the affordability advantages of units over houses and the growing preferences for apartment living and inner-city locations.

Over the first three months of this year the median weekly apartment rent grew by 1 per cent, while that of houses remained flat.

The southern capital had the highest growth in rents of any capital city over the quarter, after a long period of subdued performance.

The median weekly rent for houses increased 1.3 per cent, while apartments rose a health 4.3 per cent. Yet despite this Melbourne remains the second most affordable mainland city for renters after Adelaide. The median rent for a house is only $380 a week, while for a unit it is $365 a week.

The high number of new inner-city apartments in Brisbane has been one of the contributing factors to that city’s stagnating rental market.

The median weekly rent for apartments fell 1.3 per cent over the quarter to $370 a week, while house rents remained unchanged at $400 a week. But over the year to the end of March it was a slightly different picture, with house rents up 2.6 per cent and no change in rents for apartments.

The South Australian capital is the place to be if you’re looking for a cheap place to rent.

It has the lowest median weekly rent for houses and apartments of any mainland capital – at $345 and $285 respectively. And they’re getting cheaper.

Over the first three months of the year house rents fell 1.4 per cent, while rent for apartments was unchanged.

The weekly rent for houses and apartments in the West Australian capital remained unchanged over the quarter.

This was because ‘‘the market continues to adjust after the unsustainably strong rental growth seen in the first half of 2013.  The median rent for houses is $480 a week, while it’s $400 for apartments.

The three smallest capital city markets all recorded falls in rental prices over the three months to the end of March.

he only exception was in Darwin where the weekly rent for houses remained steady at $700 a week.

When it comes to gross rental yields, the smaller cities show the healthiest increases.

The rental yields on houses in Hobart grew 5.9 per cent.

The next highest was Darwin with 2.9 per cent and Adelaide with 1.5 per cent. Sydney had quarterly growth in rental yields for houses of 1.1 per cent, while Melbourne’s was 0.3 per cent. But the yield on Melbourne’s apartments led the pack last quarter, increasing by a healthy 5.6 per cent.

Brisbane continues to give investors the highest gross yields for houses and apartments, while Sydney and Melbourne still have the lowest yields of all the capitals.

With prices growth likely to accelerate this year in Brisbane expect increased house investor activity although yields may weaken.

'Melbourne & Sydney are the only cities where rents are rising.- Andrew Wilson' have 2 comments