I know investing in USA property has been popular recently. Of course just because some people think it’s a good idea doesn’t mean it is – does it?

If you’ve been following my blogs about investing in the USA you’ll know I think it’s a bad idea – pure speculation.

Anyway…I found this great blog by Morgan Housel on Motley Fool insightful as he shares 4 shocking things happening to the American middle class.

This is what he writes…

Hey, buddy, how you doing these days?

Every three years, the Federal Reserve takes a break from abstract studies filled with hieroglyphics to ask Americans that simple question. It’s called the Survey of Consumer Finance, and its latest report makes one thing clear: The American middle class is sick as a dog.

The report, which covers the year 2010, is painstakingly detailed. I combed through the tables and pulled out data for those in the 40th to 59th income percentiles — call it middle-class America.

What it shows probably won’t surprise you — I think most of us are numb to bad news — but as one analyst put it, this is “the most important story in America” right now. 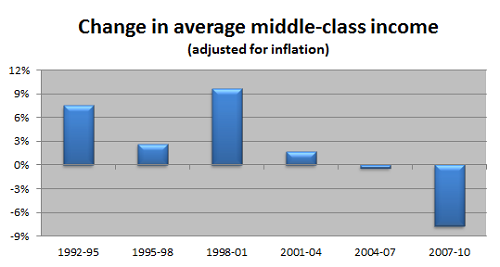 In his book The Great Divergence, Timothy Noah adds stark detail: “From 1980 to 2005, 80 percent of the total increase in Americans’ income went to the top 1%.”

The story for real middle-class family net worth is even bleaker: 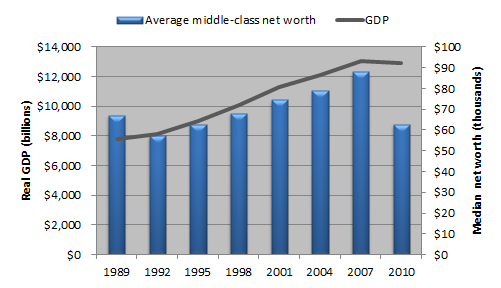 Two decades of prosperity when real GDP grew from $7.8 trillion to $13 trillion, and the net worth of middle-class American families went… down by 7%. Pundits these days ask in worry if we’re facing a lost decade. Most Americans have already been through two (and counting).

Not surprisingly, the housing bust is responsible for most of the decline in net worths.

Many of those wounds came about through greed and temptation — households borrowing more than they could ever afford, buying a second home to flip, zero-interest mortgages… you know the story. The takeaway from that is that the housing-driven net-worth gains from 2001 to 2007 were fictitious, meaning the 2010 figures in this chart are probably the most realistic of the last decade.

The temporary rise, not the sudden decline, is the outlier here.

And how are families doing rebuilding their net worths? Awful. This chart shows the percentage of middle-income families who reported they could save anything in the previous year: 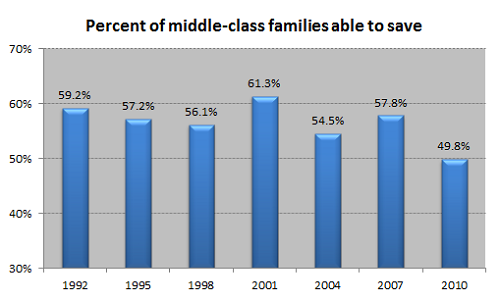 Even this masks the pain. More than 35% of Americans who save say their primary motivation for saving is “liquidity,” which the Fed notes “is generally taken to be indicative of saving for precautionary reasons.” The percentage claiming to save for investments fell from 8% in 1989 to 1.2% in 2010, and those who said they were saving for education dropped from 11% in 1998 to 8.2% in 2010 (though that might reflect a change in the composition of households). Not only are fewer middle-class families saving, but more of their saving is preparing for something bad to happen, not investing for a better life.

Last up, consumers as a whole have made big strides shedding their debt over the last few years (largely by defaulting on it). But that doesn’t appear to be the case for the middle class: 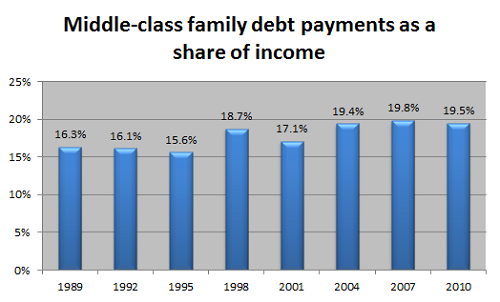 Bear in mind, this is only through 2010. The figures are probably better today as mortgage defaults continued over the last two years.

When taken as a whole, this data contradicts other sources that show a sharp decline in debt-to-income ratios. Why the difference? It’s likely that some consumers have cut a lot of debt while the median has only begun to deleverage. A recent report by the consultant group McKinsey reckoned that U.S. consumers could shed enough debt to be healthy and sustainable by as early as next year. The Fed’s report might add a twist to that: Some consumers could be healthy by next year, but most probably won’t be.

So, what’s this all mean?

The economy as a whole hasn’t done great over the last two decades, and what growth has occurred has been concentrated to a very small group. Most Americans have, at best, stagnated for the better part of two decades.

Should we be upset about that?

The short answer is no, but there’s an important qualifier.

Everyone should want inequality of outcomes — those who work the hardest and make the best decisions should earn the most, and vice versa. Where it gets ugly is when there’s inequality of opportunity.

That’s where there’s room to scoff at the status quo. The United States has one of the lowest rates of income mobility — the ability to be born poor and become rich — in the developed world. In 2001, Fed economist Bhashkar Mazumder calculated that “income elasticity” in the U.S. is 50% to 60%, meaning that if a father earned $1 more than average, his children could expect to earn $0.50 to $0.60 more than average. This isn’t surprising: Education has a big effect on future earnings, and having rich parents makes it easier to get a good education. Amazingly, Mazumder found that incomes among brothers are more correlated than height or weight.

On the other hand, all of these numbers need to be kept in context. Comparing the well-being of Americans to other Americans can be shortsighted in a world of 7 billion people — particularly in a world that is increasingly globalized.

You need to earn just $34,000 a year to be part of the richest 1% of the globe — and that’s adjusted for the difference in living costs around the world. According to the U.N., nearly half the world’s population, 2.8 billion people, earn less than $2 a day. And according to the World Bank, 95% of those living in the developing world earn less than $10 a day. “Struggling” is a relative concept. Keep that in mind next time you ponder the plight of the American middle class.