It's been revealed that the housing market has been hit with a new trend labelled ‘lifestyle renting’ - which is said to cause some dangerous housing stress.

According to the research conducted last year, Australians are shelling out up to 38 per cent of their weekly income to rent in desirable locations – well above the 30 percent threshold for housing stress.

The finder.com.au analysis showed across the capital cities, renting a house in Sydney takes a staggering 37.9 percent of the NSW average wage.

On average, Melbourne renters are handing over 30.7 percent of their weekly earnings on rent.

Brisbane rent was also a potential source of stress, requiring 28.4 percent of the average Queensland wage.

Renting an inner-city property that is close to trendy bars, cafes and work trumps the home ownership dream for a growing number according to Bessie Hassan, Consumer Advocate at finder.com.au.

It’s alarming that they are overstretching themselves.

It’s a case of ‘keeping up with the Joneses’ for some who are living in properties they can’t afford.

Interestingly Sydney renters spend a higher proportion of their weekly income paying rent than what some people are committing to their mortgages. 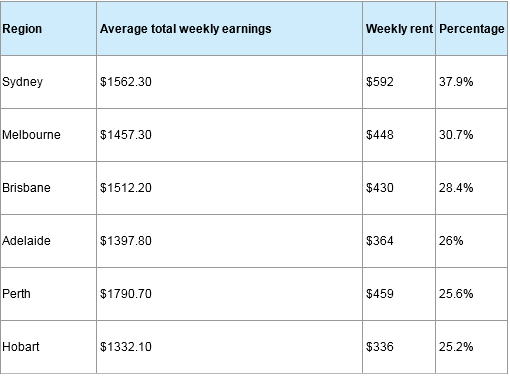 If you’re forking out more than 30 percent of your income to pay for housing, then you are considered to be in housing stress.

Ms Hassan says the old real estate belief that people rent because they couldn’t afford to buy was not the case anymore.

Some have just become accustomed to the ‘good life’ of being close to everything and are not prepared to give that up to get onto the property ladder,” she says.

Rentvesting’ is also becoming a more popular option for Australians – this is where people buy an investment property in a more affordable suburb as a way to enter the property market sooner, and proceed to rent in their desired location.

Data from the Australian Bureau of Statistics shows an increase in households who are renting over the past two decades.

The proportion of private renters will likely continue to increase, with renters avoiding the hidden costs of homeownership, which include maintenance, council rates and insurance, Ms Hassan says.

Hobart was identified as the most affordable capital city to rent where you will sacrifice 25.2 percent of your weekly wage on rent.

Ms Hassan says renters could be forced out of capital cities with rents between 4.9 and 15.5 percent higher than regional areas in those states.

The biggest gap was in New South Wales where the proportion of the average weekly wage to rent in the capital city (37.9 percent) was 15.5 percent higher than regional areas (22.4 percent).

Renting in areas outside of the capital cities was much more affordable with the percentage of weekly earnings ranging from a modest 19.9 percent (in Victoria and Tasmania) up to 23.1 percent (in Queensland).

But even then, this is well within the housing stress threshold making regional living, unsurprisingly, an attractive option for some renters. 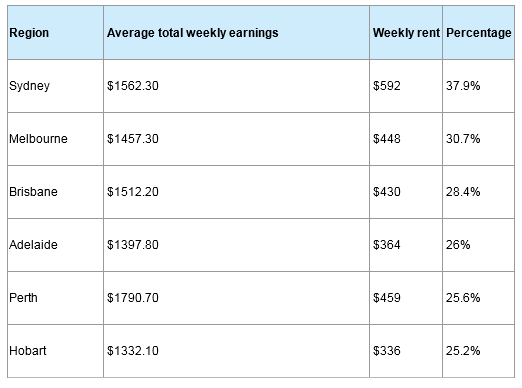 Top 5 tips on how to reduce housing stress

'Lifestyle Renters – Trend or Trouble?' have no comments