Economists and property pundits bang on about demographics continually, and not without good reason. 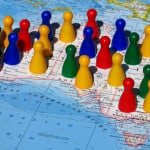 It’s often said that where a population does not grow then GDP growth may likely stall, in part because Australia, like many developed nations, has an ageing population.

For this reason, Australia has a policy of targeted population growth and our population pyramid in 2060 is likely to have a very healthy shape to it.

Unlike many other countries, we aren’t expecting to see a so-termed demographic cliff, rather a rapidly growing population fuelled by immigration. 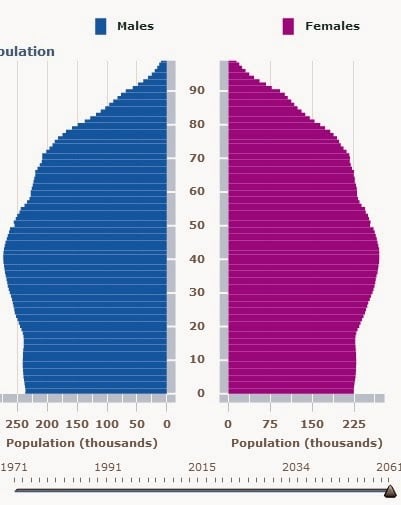 Other developed countries have learned from the tribulations of countries like Japan, and Australia is expecting a huge population surge to more than 41.5 million by 2061 from just 23.4 million today.

Of course, just because GDP rises, this does not mean in turn that GDP per capita does so…our average standard of living may fall if things don’t go according to plan.

I already alluded to Japan’s demographic challenges and the disastrous impact on its own economy.

A little closer to home (for me anyway) I recently saw an article which said that house in parts of Stoke-on-Trent in England were selling for only one pound sterling.

As recently as a couple of decades ago the coal mines in Stoke were shattering production volume records, having undertaken a huge ramp-up through the post war years.

According to Census data the population of the town peaked back in 1931, while the 2011 Census confirmed the first rise in the Census population in 8 decades. Stoke may re-invent itself over time as a services industry town, but it’s been a challenging period.

Other world cities with a heavy dependence of one industry have undergone similar fates.

I don’t have to go into great detail on the decline of Detroit’s car industry, but as you can see, since the city population peaked at around 1.85 million in 1950, the headcount has plummeted by more than 1.1 million people – by more than a quarter in the last decade alone.

In total the population has fallen by a catastrophic 60%.

The resulting challenges have included poverty, crime, very high unemployment rates and default’s on the city’s debts. In some areas, real estate prices collapsed to zero.

Financial crisis and beyond

We’ve been lucky in Australia in that we sailed through the financial crisis relatively unscathed.

This week I’ve been reading Gordon Brown’s account of how he attempted to deal with the collapse of Britain’s banks and the ensuing fallout.

I found it to be an enthralling read, and also a somewhat alarming one. It is increasingly clear that global economies are far more inter-connected than we had thought before the crisis.

Risks are not as well diversified across financial institutions as was widely believed (largely thanks to increasingly complex derivative transactions) and country’s economies do not operate in a vacuum.
Funds can also be shifted around the world to thriving economies at the click of a button, which is why despite the lack of hard evidence being produced, the news articles on Chinese property buyers in Australia continue to surface by the day.

It’s said that there are 60 million wealthy Chinese, many of who are looking to park their funds overseas, so there may be a significant impact in Australia, however difficult it is to produce statistical evidence.

It was also quite amazing to consider the financial crisis started back in 2007, which will soon be 7 years ago!

When it comes to investing there are no rights or wrongs as such, only what is right for each person. I always try to take the approach of controlling the controllables.

In the share markets we have learned that even giant, established companies are not immune from collapse, so it is wise to be well diversified, perhaps through equities products which achieve that instantly for the investor.

And while reading news articles over the past decade or two might certainly have turned the hairs of a few property investors grey (or perhaps just made them fall out), the reality has been that investors in cities like Sydney and London have done very well as the respective populations continue to grow (by around half a million persons per decade in Sydney’s case).

As Chris Joye tackled in this article, Sydney and Melbourne are expected to grow in size by some 80% over the coming decades, with populations growing to more than 8 million.

Of course, booming population growth does not guarantee higher real estate prices, but it appears eminently more sensible to me to be an owner of real estate in cities with that kind of population profile and a diversified range of industries rather than one-industry towns where cyclical forces too often apply.

We know that supply in property tends to come in waves cyclically, but it appears wise to focus on areas where it is assured that demand from population growth will grow strongly over the long term.