The number of residential vacancies remained tight across the nation in June 2015, with a vacancy rate of 2.4% posted based on 72,849 vacancies, up from May when vacancies were 71,970.

Rates remained in the same in most capital cities, excluding Perth, Brisbane and Canberra, were vacancy rates climbed.

The biggest rise was recorded in Perth and Canberra with a monthly change of 0.2 percentage points from May.

Over the year, vacancy rates in Perth have continued to climb with a significant 1.1% jump from this time last year.

Year-on-year, vacancy rates are down for Canberra, Melbourne, Hobart, and to a lesser extent Sydney.

Melbourne has posted the biggest yearly fall in its vacancy rate from 2.7% to 2.3%, reflecting the tightening of the market post downturn.

Hobart has also recorded ongoing yearly falls with vacancy rates dropping from 1.8% to 1.5% in June 2015.

Notably, Darwin has recorded a fall in asking rents of 16.4% for houses and 9.8% for units for the past 12 months.

Yearly falls have also been recorded in Perth, with asking rents down 6.2% for houses and 4.9% for units.

In contrast, Melbourne has recorded a rise of 3.1% for houses and 2.2% for units.

Overall vacancy rates were steady over the month of June.

The level of vacancy rates (at 2.4%) is marginally favouring tenants.

Further evidence of this opinion is that SQM asking rents index effectively remained flat for the month.

We note the very large rent declines recorded in Darwin.

With rents falling by 16% over the past 12 months, it is clear market conditions for existing Darwin property investors have deteriorated further.

The Darwin housing market is having a severe downturn and I believe it is likely to get worse from here before the market finds a bottom. 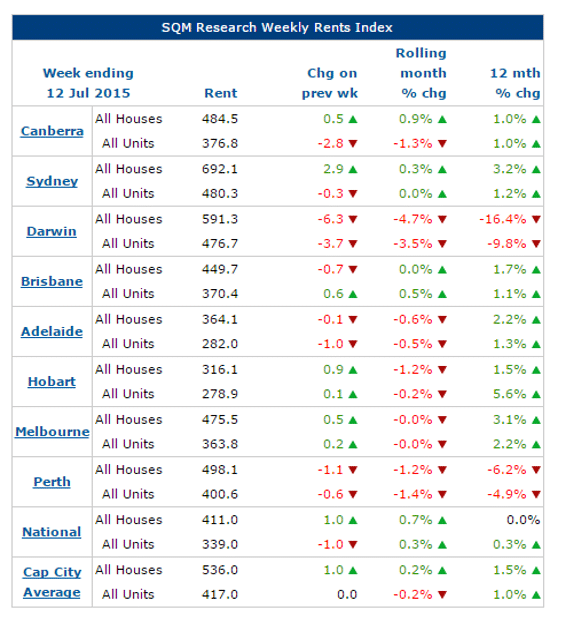 'Latest vacancy rates around Australia' have no comments