It’s clear Sydney and Melbourne apartment investors were the losers of 2020 with rents and prices falling.

Sydney apartment rents fell by over 10% for the year.

However, if you owned an investment property in Darwin or Perth, or indeed regional Australia, you have had one of the best years ever.

The move towards regional living was the primary reason why investors outside our two largest capital cities did so well.

Will this trend continue into 2021?

The truth is we are starting to see at least a part reversal. CBD and inner suburban vacancy rates have been falling again.

And inner urban agents have been telling me demand has clearly picked up for such properties.

But I don’t think it is going to be a complete reversal.

Demand for inner city property will remain affected by the closure of the international border as well as ongoing caution on future city lockdowns.

This will mean 2021 will remain largely a tenant’s market in the inner cities but will also very much remain a landlord’s market for regional Australia.

The national residential rental vacancy rate increased by 0.1% over the month of December 2020.

This time last year, the national vacancy rate was higher at 2.5%.

The rise for the month was predominantly driven by Melbourne and to a lesser extent, Sydney.

Brisbane, Perth and Hobart remained stable. While Adelaide recorded a minor decrease of 0.1% in December.

The surplus of rental property in Melbourne and Sydney’s CBDs have declined, Melbourne CBD vacancy rate now stands at 8.7%, down from 9.1% in November.

Sydney CBD vacancy rate has declined to 7.8% in December, down from 9.5% in November. 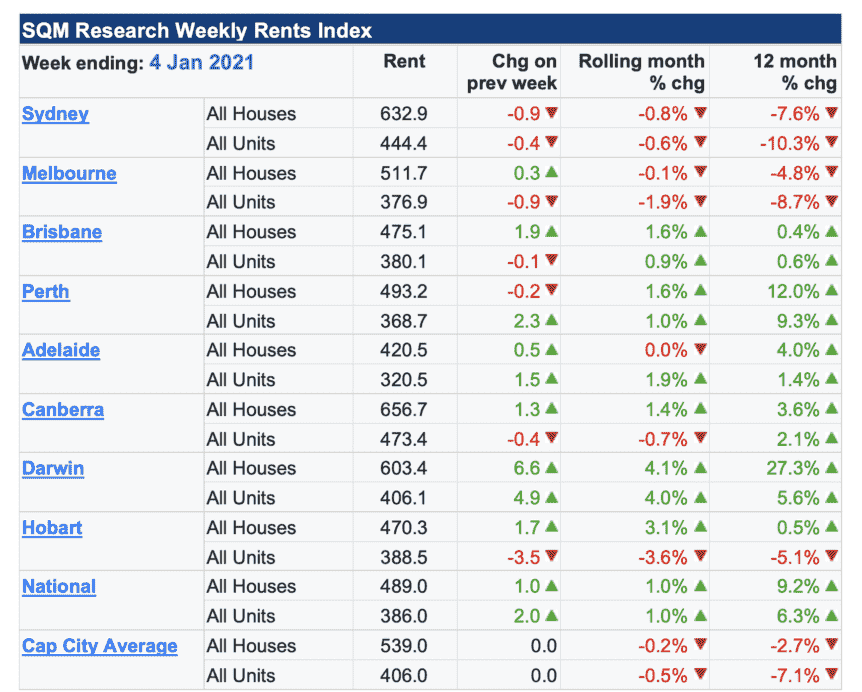 However the majority of capital cities recorded increases in both house and unit asking rents, with Darwin recording the highest increase of 4.1% over the month for houses and 4.0% in unit asking rents. Hobart recorded a 3.1% increase in house rents but a 3.6% decline in unit rents.

Sydney and Melbourne recorded declines in both house and unit asking rents over the month, 0.8% and 0.1% respectively for houses, and decreases of 0.6% and 1.9% respectively, for units rents, which weighed on the weighted results for the capital cities.

Canberra recorded increases in house rents of 1.4% but unit rents declined by 0.7%. Brisbane, Adelaide and Perth house and unit rents also increased over the month.
Year on year, Capital City Average asking rents declined for both houses and units – 2.7% and 7.1% respectively.

Sydney in particular recording a high 10.3% decline in units and 7.6% decline in houses in December 2019. Melbourne’s asking rents also declined year on year, 4.8% for houses and 8.7% for units.