The world didn’t end in December as the Mayan’s predicted and our property markets didn’t collapse in 2012 as the doomsayers predicted.

The latest RPData figures show that home values around Australia recorded an aggregate decline of -0.4% over the 2012 calendar year.

While capital city home values remain -5.7 per cent lower than their historic highs of November 2010, dwelling values are up 1.8 per cent from their low of late May 2012.

Across the 8 combined capital cities throughout the month of December, the RP Data-Rismark HomeValue index fell by -0.3 per cent.

The monthly result was pulled lower by a weak unit market performance, with unit values moving -1.1 per cent lower in December compared with a virtually flat detached housing market (-0.1%).

The strongest performing capital city over the month of December across the major capital cities was Melbourne where values increased by 0.5 per cent after having fallen over the previous two months.

In Darwin which has been the standout market throughout the year, home values fell by -2.5 per cent in December. 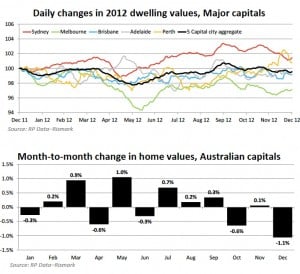 How to profit in this market.

I know some people will make  a fuss that it’s the second year in a row that property values have fallen, but not all markets had falling prices and of course as you’ve often heard me say – “you are not buying the market.”

Our current property markets remind me of the early 90’s when real estate values fell for a number of years and then remained flat for a few more years. I remember those days well as I took advantage of the flat markets, buying individual properties below intrinsic value and  “manufacturing capital growth” through renovations and development.