Figures released by SQM Research have revealed that the number of national residential vacancies rose in September, with 75,412 rental homes available, giving a national vacancy rate of 2.4%, up from 2.3% in August 2016.

The biggest capital cities Sydney and Melbourne recorded vacancies rates of 1.8% and 2.0%, respectively, up marginally from August 2016, while Brisbane’s vacancy rate rose to 2.9%, up from 2.7%.

Perth reported the highest vacancy rate at 5%, though it was steady from the previous month.

Hobart had the tightest rate at just 0.6%.

Year-on-year results demonstrate that the national vacancy rate is up slightly.

Reflecting its high vacancy rate, Perth has again recorded big falls in asking rents of 9.5% for houses and 11.1% for units over the past 12 months.

Yearly falls have also been posted in Darwin, with asking rents down 4.8% for houses and 3.5% for units, though Darwin remains the second most expensive city for rents in Australia, following Sydney, where asking rents for houses sit at $725 a week and $511 for units.

Asking rents have also jumped in Canberra, up 12.3% for houses and 9.3% for units from a year earlier.

Despite a tight vacancy rate, Hobart continues to offer the most affordable rental accommodation, with houses costing just $359 a week and units averaging $287 a week.

Asking rents have slipped back in Brisbane as vacancy rates have continued to rise this year.

At 2.9%, the rental market is favouring tenants and given the ongoing new apartment surge, I think rents in Brisbane will continue to fall from here, particularly in the inner city. 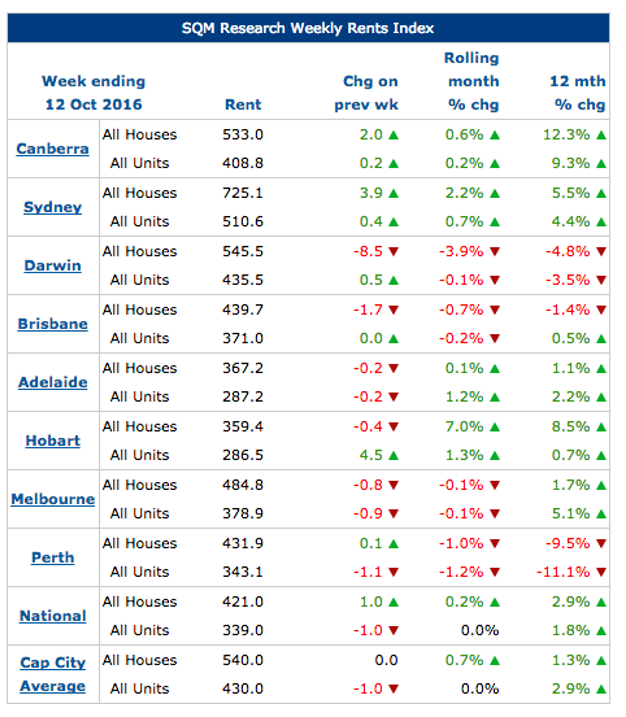 Looking forward, vacancies are likely to rise in Melbourne, Brisbane and Sydney over 2017 as more new high-rise apartment developments come onto the market.

However, we maintain that the oversupply issue appears to be constrained to concentrated areas such as the inner-city regions.

We are not as confident we will see a contagion affect where the whole capital city market is affected.