National dwelling values stabilise in July as five of the eight capitals record a slight rise in value.

The CoreLogic July 2019 home value index results delivered another sign that housing conditions are stabilising following improvements in credit availability and lower mortgage rates, with national dwelling values flat over the month, supported by a subtle rise across most of the capital cities.

Our national dwelling value index may have found a floor in July, with dwelling values holding firm over the month following a consistent trend towards smaller month-on-month declines through the first half of the year. Since peaking, the national index is down 8.3%.

The stabilisation in housing values is becoming more broadly based, with five of the eight capital cities recording a subtle rise in values over the month, while the regional areas of South Australia, Tasmania and Northern Territory also recorded a lift in housing values in July. 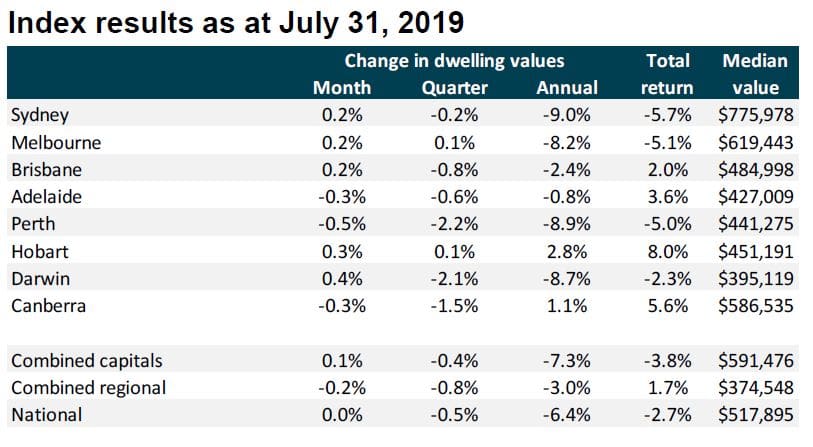 A number of factors are supporting the turnaround in housing conditions, however lower mortgage rates, improved access to credit, a boost in housing market confidence post the federal election and recent tax cuts are likely the primary drivers.

Other factors include improvements in housing affordability and a reduction in advertised supply levels.

All of which is creating a stronger selling position for vendors.

The primary drivers for the turnaround in housing market performance were Australia’s two largest cities, Sydney and Melbourne, where values have ticked higher over the past two months, taking values 0.3% off their floor in Sydney and 0.4% higher in Melbourne.

The 0.2% lift in Brisbane values was the first month-on-month rise since November last year.

Despite an unprecedented amount of new apartment stock entering the market, Sydney and Melbourne unit values have consistently outperformed the detached housing sector through the downturn, and this trend is continuing into the recovery phase.

The stronger performance across the unit sector may be attributable to ongoing affordability challenges in Sydney and Melbourne which, according to Mr Lawless, could be driving demand towards the medium to high density sector.

Values for higher density dwellings are generally lower, however we may see some dampening of unit values in coming months across those precincts where supply is elevated as the large number of high-rise off-the-plan apartment sales moves into the re-sale market. 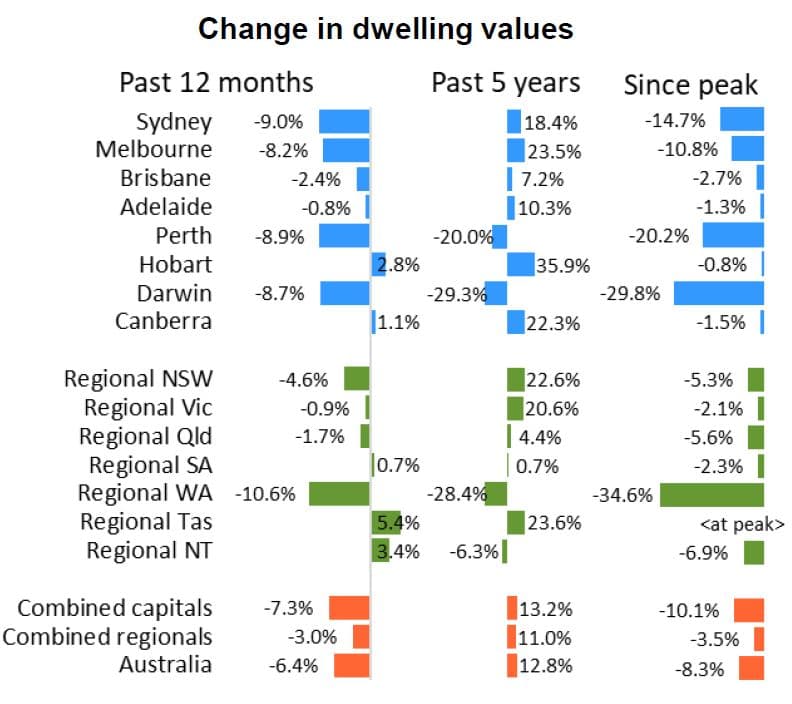 With borrowing capacities recently increasing as a result of lower mortgage rates, and a reduced serviceability floor, existing owners may increasingly be looking to upgrade into more expensive homes. 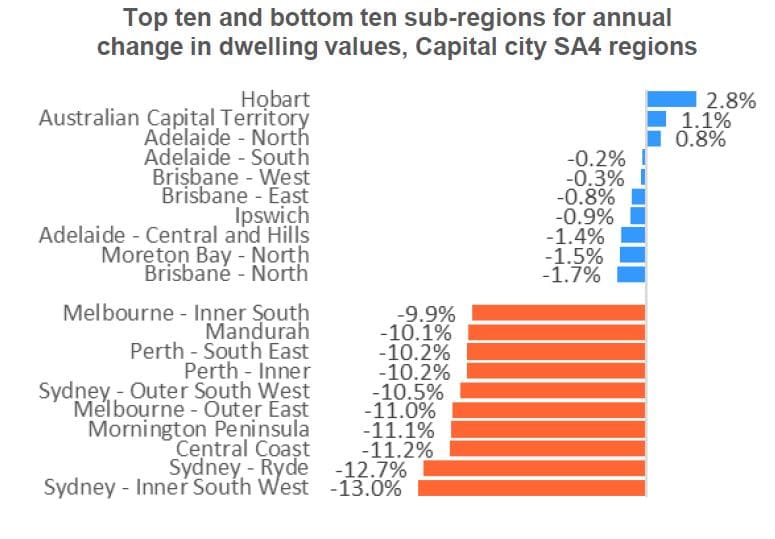 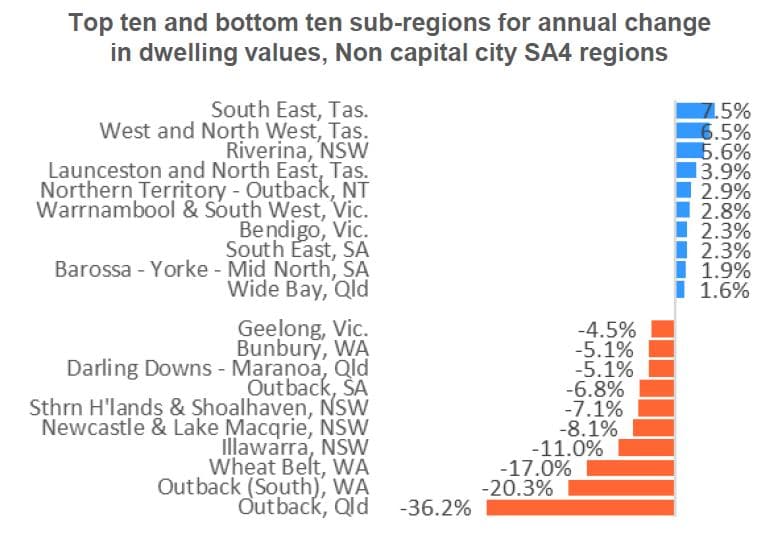 Although housing values have stabilised over the month across most markets, on an annual basis only three of the forty-six capital city SA4 sub-regions have recorded a rise in values.

While Hobart and Canberra top the list of best performers, areas of Brisbane and Adelaide comprise the remaining top ten best performing sub-regions over the past twelve months, although seven of the top ten have recorded a decline over this period.

The weakest sub-regions, based on the annual change in dwelling values, are confined to areas of Sydney, Melbourne and Perth.

As Sydney and Melbourne values level out and Perth values continue to trend lower, sub-regions of Perth are once again starting to comprise a larger portion of the top ten list for the largest annual fall in dwelling values. 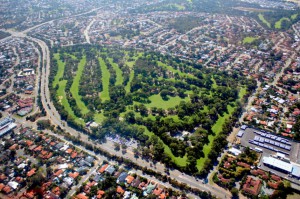 The weakest regional markets tend to be the broader outback and agricultural regions of Queensland, Western Australia and South Australia, where drought conditions are weighing down housing activity and dwelling values.

The regions surrounding the Sydney metro area have also recorded larger value falls over the past twelve months. With Sydney values now stabilising we might see a similar but lagged trend in these satellite markets as well.

The CoreLogic stratified hedonic index highlights the most expensive quarter of the housing market is leading the recovery trend. 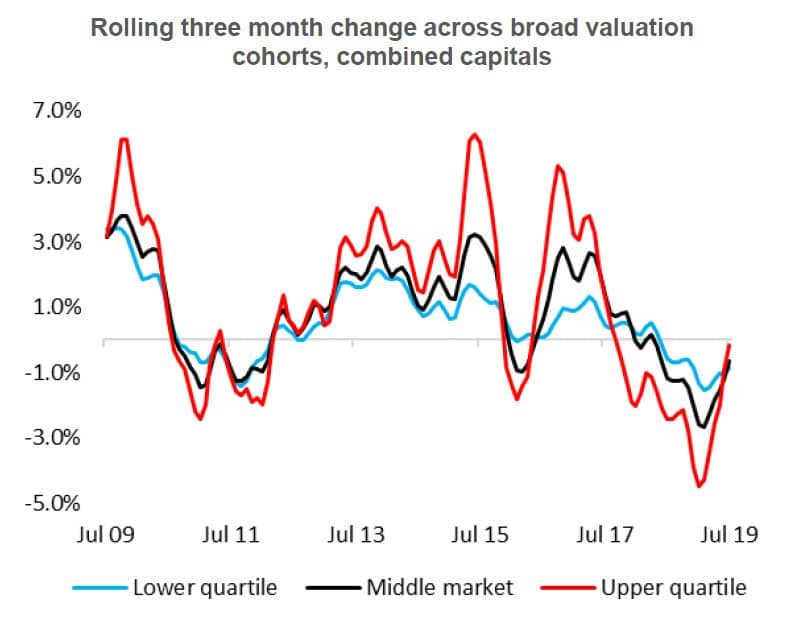 Nationally, rents were down -0.1% over the month to be only 0.6% higher over the past twelve months.

While most regions of the country are recording relatively subdued rental growth, the only cities where rents are lower over the past twelve months are Sydney (-2.4%) and Darwin (-4.0%).

The strongest rental conditions are in Hobart, with a 5.5% increase over the past twelve months.

Across the combined capitals index, rents were down 0.1% in July, led by falls in Sydney, Perth and Canberra.

With housing values stabilising and rents recording a slight fall, it looks like the yield recovery cycle has stalled.

Capital city yields have nudged lower over the past two months, dropping from a recent peak of 3.88% in May to 3.84% in July.

Sydney remains the lowest yielding market, with gross rental yields tracking at 3.43%, down from a recent peak of 3.51% two months ago.

The July home value index results provide further confirmation that the housing market has reacted positively to the recent stimulus of lower mortgage rates and improved credit availability, however the response to-date has been relatively mild. 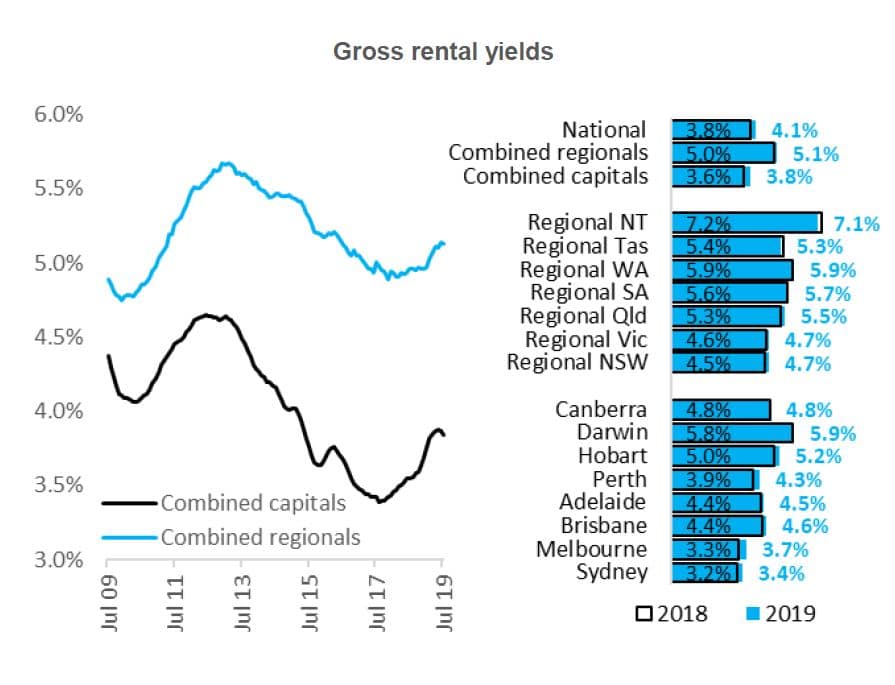 While the CoreLogic indices are a timely reference for housing values, other housing and credit indicators are also showing a positive trend.

Auction clearance rates have been holding above 70% through most of July across Sydney and Melbourne, indicating a better fit between buyer and seller pricing expectations.

At the same time, advertised housing stock has been reducing.

Across the combined capitals, the number of freshly advertised properties is down 25% relative to the same time last year and total advertised stock levels are now tracking 5% lower relative to a year ago.

The trends in housing credit have also been pointing towards stability.

Although housing finance data from the Australian Bureau of Statistics is only current to May, the trend leading up to June was clearly pointing towards an easing in the credit downturn.

Although the trend towards a recovery in housing values is relatively fresh and centered within the largest cities, there is no sign of a ‘v-shaped’ recovery.

Despite an improvement in credit availability, he said, “housing credit polices remain much tougher than they were prior to the Royal Commission as lenders continue to move away from the Household Expenditure Measure (HEM) and examine borrower spending behaviors and expenses more closely.

The ongoing tightness in housing credit is expected to keep a rapid rebound in housing values at bay, despite the lowest mortgage rates since the 1950’s.

In closing, no doubt policy makers will be keeping a close eye for signs of investor exuberance, or a more rapid acceleration in the recovery trend.

If values were to start appreciating rapidly, there could be a renewed round of policy responses aimed at keeping a lid on housing prices whilst at the same time, allowing low interest rates to stimulate the economy more broadly.