Each fortnight I update my chart of the titles registry figures for Queensland, although I don’t post the results here all that often.

When figures aren’t seasonally adjusted, it pays to be wary of drawing conclusions from individual weeks or months of data.

After all how many times have new home sales figures “peaked” in this cycle, or how may times has housing finance “tanked”, or buying intentions “cratered”, or consumer confidence been “smashed”, and so on?

Every other month in each case, pretty much.

By drilling trendlines through the titles registry figures you can see that Queensland’s mortgage and transfers market has ground its way through a long, slow recovery since bottoming around late 2011. 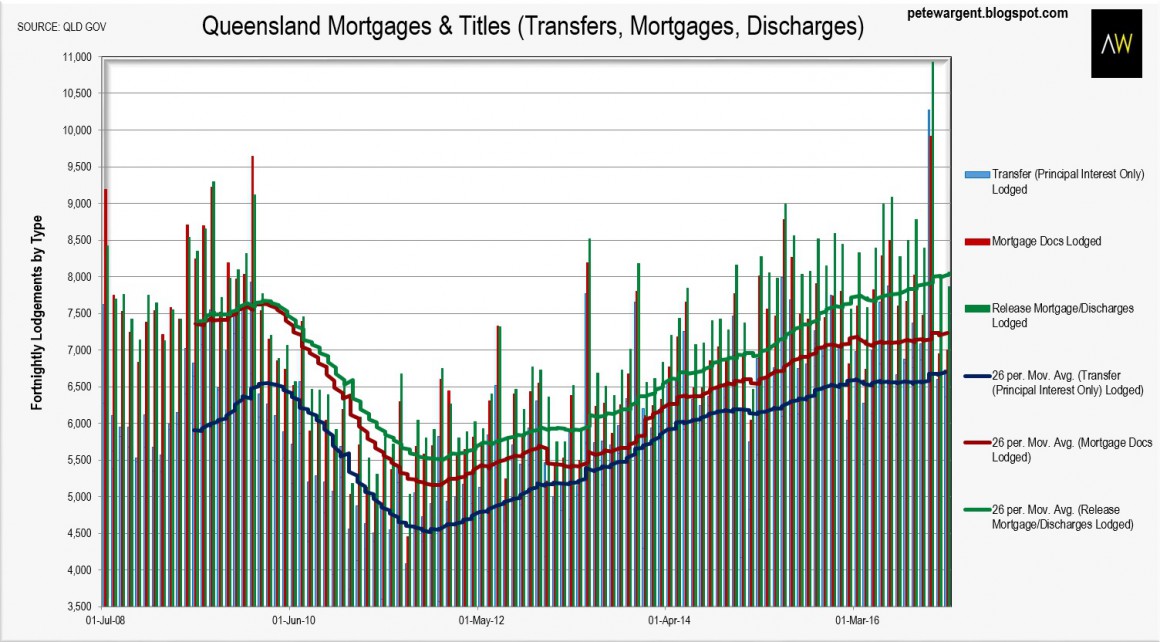 There was a blip in activity following APRA’s initial salvo of macroprudential measures – and part of the increase in activity relates to a surge in multi-unit construction – but for now the uptrend in activity remains in place.

The Queensland Government updated its annual land valuations for 2017 last week, which showed a very wide range of outcomes across the state.

The post-2012 malaise continues apace across many of the resources regions.

There was more excruciating news for Gladstone which recorded another massive 20.6 per cent drop in median land values (although the Mayor kindly noted that residents shouldn’t expect a reduction in their rates bill).

Dwelling prices have often seen drops of well over 50 per cent since 2012, and in many case rents have fallen by at least an equivalent amount.

The news wasn’t much brighter in Mackay which racked up a third year of declines, and the Central Highlands saw land values fall for a fourth year, while Rockhampton saw land prices fall by 8.7 per cent from the preceding valuation date.

There were bright spots, though, with the Gold Coast recording another year of recovery, and land prices notching up solid gains in Brisbane City Council (BCC), with the usual variances at the suburb level. 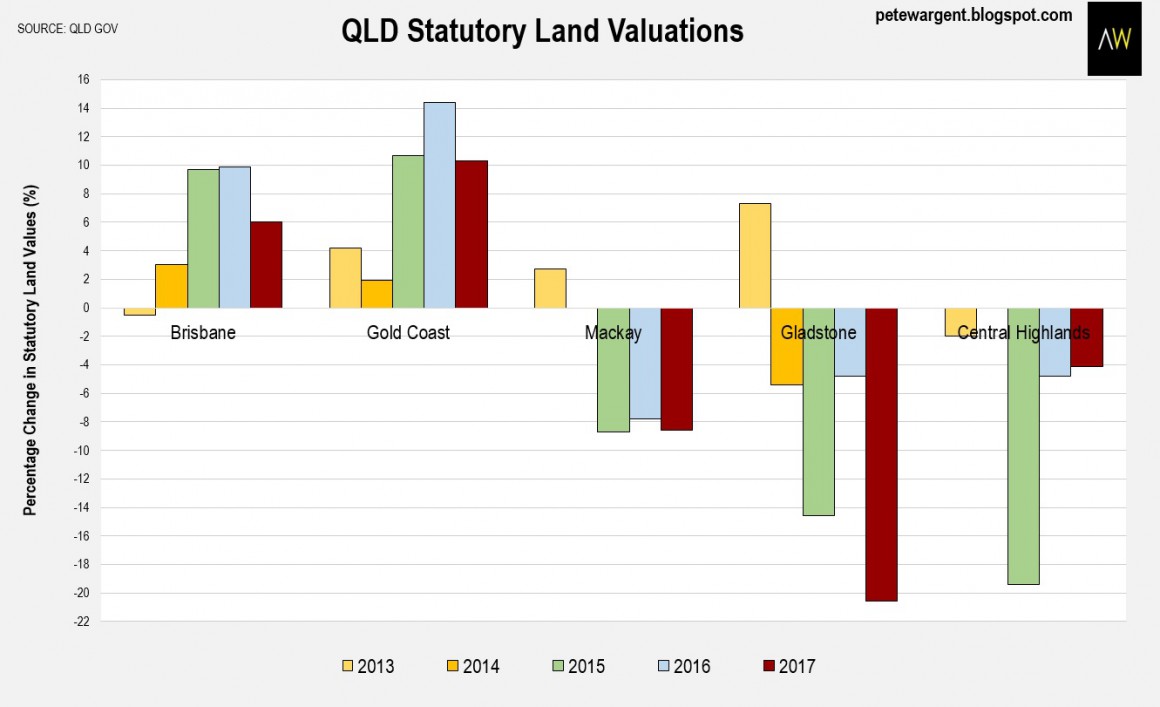 It is wise to exercise caution in interpreting suburb level median land values, not least because the Queensland Government rather likes to see those rateable land values rising for all-too-obvious reasons (though rates aren’t based only on land valuations, the Government assures us!).

Changes in land use resulting from the BCC 2014 City Plan may also potentially skew the results in suburbs with increasing multi-unit development, for example.

Nevertheless, the figures are well worth a look, for the Valuer-General’s figures logically cannot diverge too far from the reality over the long run.

Residential land values increased across some 132 Brisbane suburbs over the past year according to the 2017 report, although there were some declines in commercial and industrial valuations on the city fringe, according to the Valuer-General.

Over the past couple of years the greatest dollar value increases have largely been seen in the inner suburbs where land values are highest. 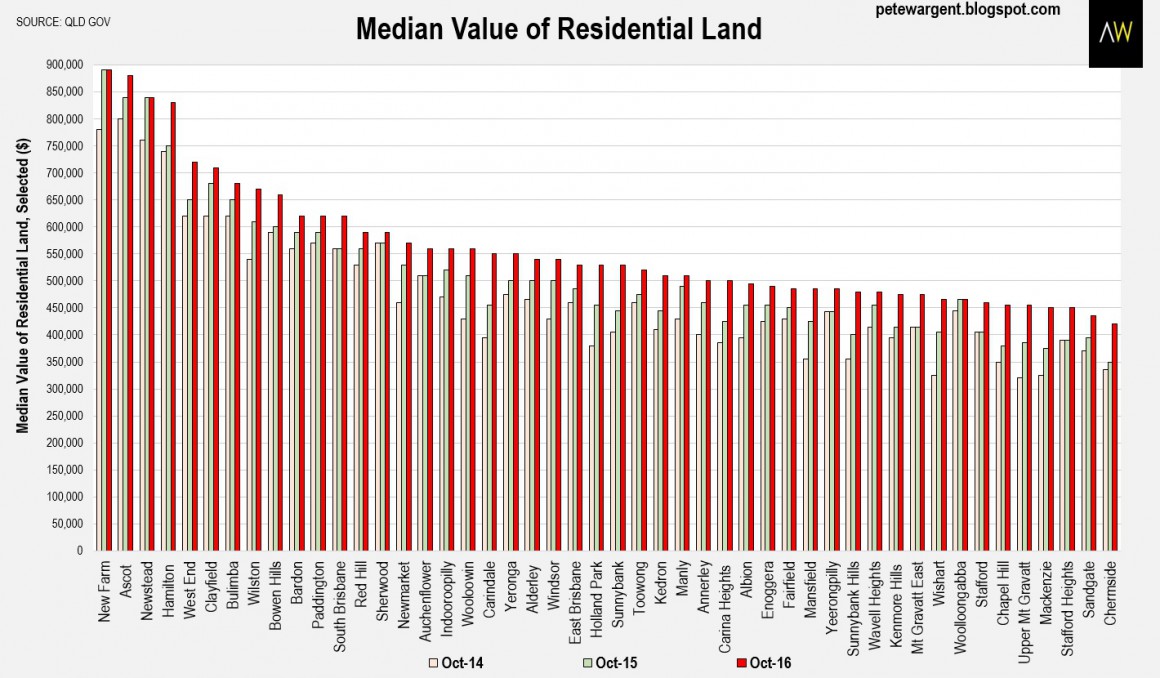 The largest two-year gains in percentage terms have been driven by a popular school catchment, however.

Suburbs located within the Mansfield State High School (SHS) catchment saw land prices rise by between 37 and 43 per cent over the two-year period, including in the suburb of Mansfield itself, Wishart, Mackenzie, and Upper Mount Gravatt.

'Is this the Queensland recovery? The Good and the Ugly' have no comments