ATMs are on the way out with the total number of yearly ATM withdrawals falling to its lowest level in five years, new research by finder.com.au, one of Australia’s biggest comparison websites, reveals.

The analysis of Reserve Bank of Australia data shows that in the 12 months to April 2016, there were 685.8 million cash withdrawals at ATMs around Australia – a decline of 43 million (6%) in one year. 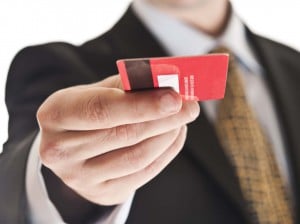 This is the fourth consecutive year on year decline – equating to a 17.2% drop since 2012.

“‘Tap and go’ and mobile payments could make ATMs obsolete in future,” she says.

“The convenience offered by ATMs is being superseded by new and emerging contactless payments.”

Ms Hassan says that bank customers who once saw ATMs as a revolution in 24/7 banking are turning their backs on ATM machines in record numbers.

“The use of ATMs had been increasing steadily since their widespread launch in the 1980s until 2009 when the momentum stopped and transactions started to slide,” she says.

“As we move closer to a cashless society the trend of less ATM withdrawals will continue.” 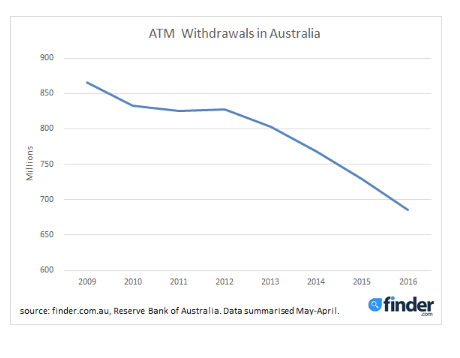 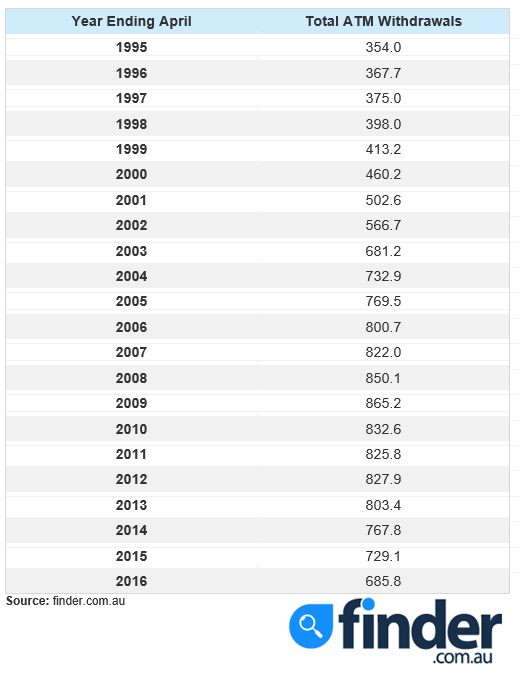 Ms Hassan says people are becoming less accepting of the extra cost of using a ‘foreign’ ATMs, preferring to use cash-out with EFTPOS or payment card technology such as payWave.

“This is a significant decline of 18.2% in ATM fees paid by Australians in five years,” she says.

In 2009, the Reserve Bank introduced reforms that meant customers were reminded of the extra cost of using a ‘foreign’ ATM at the time of the transaction.

The emergence of payment card technology that doesn’t require a pin number to be entered for transactions below $100 in value is changing the way shoppers pay.

“Why spend 10 minutes hunting around for your bank’s ATM when you can just flash your debit card for those everyday purchases?” says Ms Hassan.

“Affordability and convenience are so important when it comes to everyday purchases so make sure you fully consider your payment options and don’t pay the lazy tax in the form of ATM fees for cash withdrawals.

“If you do need to withdraw from an ATM, keep an eye out for banks that waive ATM withdrawal fees, or alternatively apply with a bank that is part of the Global ATM Alliance as this will allow you to benefit from minimal withdrawal fees, particularly when you travel interstate or overseas.”

'Is this the death of ATMs?' have no comments