Melbourne and Sydney are once again dominating our population growth

I looked in detail here at the different components of Australian population growth, which appears to have bottomed out at a sturdy +313,200 per annum and is projected by the Department of Immigration and Border Protection (DIBP) to strengthen forthwith, largely driven by the issuance of visas to international students.

Population growth is plenty slower than it was at +1.3 per cent per annum, but still robust and comfortably ahead of earlier forecasts. 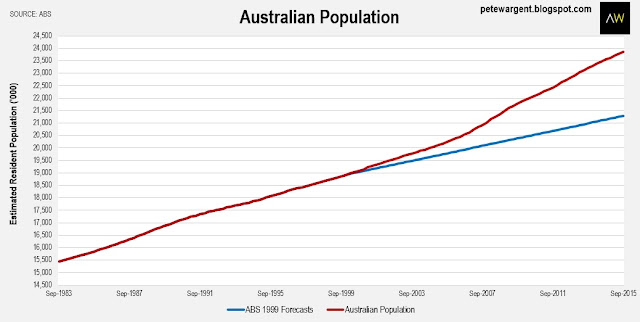 Since the demise of the resources construction boom, net overseas migration (NOM) into Western Australia, Queensland and the Northern Territory has quickly dried up.

However the same is not true in the two most populous states, which are now accounting for more than three quarters of NOM. 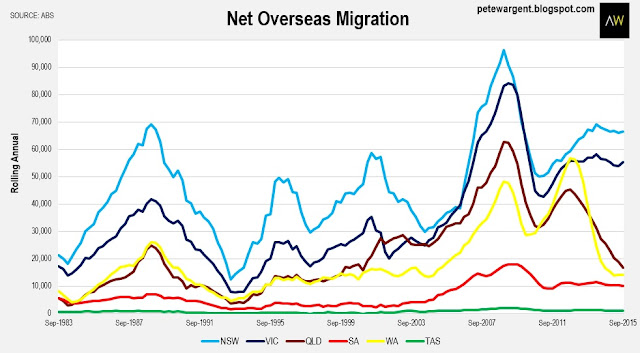 Having slowed considerably over the past decade, interstate migration is now tentatively rising again.

The net interstate migration (NIM) chart below forms an intriguing shark pattern, with New South Wales and Queensland tending to dovetail over time.

Typically at this stage in the housing market cycle we might expect to see folk relocating from New South Wales to Queensland to enjoy a lower cost of living.

And this is now beginning to happen some extent, with Queensland enjoying a positive annual inflow from NIM of +6,900, while New South Wales records a corresponding annual outflow of -7,450. Interestingly, however, the biggest beneficiary of interstate migration is now Victoria at +11,200.
Notably for such a small state in population terms, South Australia suffered an annual net outflow of -4,100 –  a level last briefly touched upon through during the financial crisis – reflecting underemployment and persistently weak conditions in the local economy and private sector labour force.

Totting this all up, and after accounting for the natural population increase (births and deaths), New South Wales and Victoria each notched up supremely strong population growth of more than +102,000 in the year to September, not far below their respective historic highs recorded in 2014.

Most of this population increase is being experienced in Greater Melbourne and Greater Sydney.

Queensland (+55,200) and Western Australia (+32,500) accounted for the bulk of the remaining growth in headcount, and you can just about throw a wet blanket over the rest, with South Australia (+0.7 per cent), Tasmania (+0.4 per cent) and the Northern Territory (+0.3 per cent) all recording population growth rates substantially below the national average. 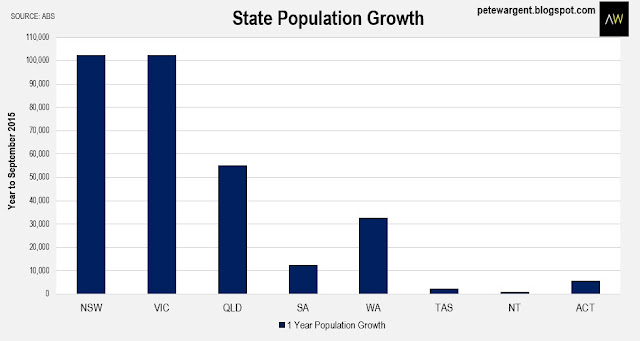 Penultimately, when looking at state population growth trends on a rolling annual basis the impact of the end of the mining boom on the resources states becomes clearly apparent, while lately population growth in Sydney and particularly Melbourne has been resurgent. 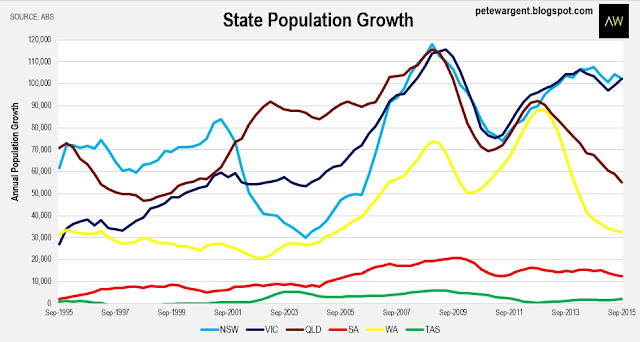 Finally, the estimated resident population figures by state and territory over the long run reveal that over the past quarter of a century the Australian population has increased by 8.9 million or 59 per cent, with well over 90 per cent of that increase having been experienced in the four most populous states. 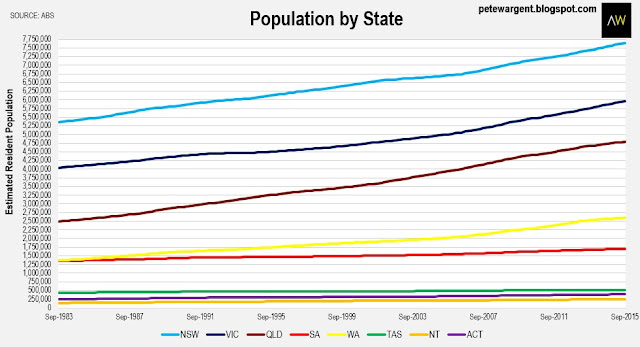 These figures are corroborative evidence for the sub-regional data which suggest that population growth has become more capital city focussed since the denouement of the resources construction boom.

In aggregate regional population growth has sunk well below the national average, with the honourable exceptions of a handful of peri-urban locations.

Meanwhile the largest capital cities are creating the greatest number of jobs, and accordingly are mopping up the lion’s share of economic and population growth.

As for why net interstate migration slowed over the past decade, before a recent rebound?

There are a number of factors which discourage interstate migration within Australia, including relatively higher house prices and therefore inefficient stamp duties in this era of lower interest rates, and prohibitive trades licensing (I need a separate licence for every state I operate in, for example).

However, the timing of the surge and decline of net overseas migration through the construction phase of the resources boom – and in particular the partial divergence from the rate of net interstate migration from around 2004 – imply that demand-driven immigration initiated by employers may in turn have stymied the opportunities for interstate migration.

After all, most of us won’t relocate interstate if gainful employment opportunities don’t exist.

Arguably fears have also abounded regarding job security since the onset of the global financial crisis, further inhibiting interstate mobility, which only really began to dissipate last year.

As for what to expect going forward?

Current trends suggest more inbound interstate movements to Melbourne and Brisbane, and outbound movements away from Sydney, Adelaide and Perth.

'Interstate migration is rising again – but why?' have no comments