Melbourne’s outstanding population growth is a major factor in the resilience of its property market.

According to RiskWise Property Research strong long-term demand is projected for the expanding city, particularly for land and houses.

too much focus was placed on short-term growth, which ignored the exceptional forecast population growth and also that a typical house in Melbourne was held for 11.9 years.

His comments follow demographer Bernard Salt’s bold prediction recently that the Victorian city’s population would skyrocket past five million by 2021 and past eight million by 2050.

The futurist also anticipates Melbourne could eclipse Sydney as Australia’s most populated capital by 2030. 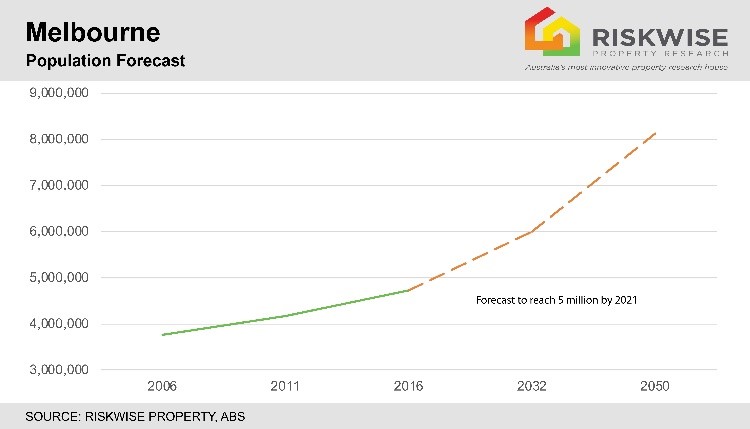 According to the latest ABS data, Melbourne is Australia’s fastest-growing city and recorded its highest-ever net annual population increase of 125,000 with very high growth rate of 2.7 per cent (2016-17).

Professor Peter McDonald, of Melbourne University’s school of population and global health, is reported to also have backed up the figures in a recent news article.

Overall, in the short-term the cooling market in Melbourne, the current lending restrictions (combined with tighter

lending restrictions) and scrutinising lending application following the Banking Royal Commission, are likely to have an impact on the housing market, including the risk of slight price falls in some areas.

However, due to this strong population growth the Melbourne property market has shown its resilience.

As per CoreLogic, dwelling prices in Melbourne have increased by 3.7 per cent and in the past quarter they have declined by a very modest 0.7 per cent.

Also, auction clearance rates are reasonable at around 62 per cent, as per Domain results this weekend.

It should also be noted that although there is, and has been, a very large supply of units, due to the outstanding population growth, the supply has been absorbed by the market.

Prof McDonald notes that “Melbourne historically grew to the southeast and out to the east and didn’t extend to the north and the west”.

From property perspective what this means is there would continue to be “very high demand for land in those areas.

Therefore, freestanding houses in the Western and Northern suburbs with reasonable access to the CBD are projected to experience solid capital growth in the medium to long-term.

When a city reaches five million people it only performs efficiently with the best public transport systems and infrastructure.

What this means IS due to potential problems with public transport systems and infrastructure in those outlying areas, townhouses and large apartments in small unit blocks that are well suited for families, located in areas with good access to amenities and to the CBD, are also projected to enjoy long-term growth.

However, units in high-rise buildings and small units not suitable for families carried a higher level of risk also in the long-term as lending restrictions and any potential changes to negative gearing could majorly impact property investors.