Most of us make the same mistake with our money over and over again:

We buy high out of greed and sell low out of fear, despite knowing on an intellectual level that it is a very bad idea.

The easiest way to see this behaviour in action is to watch money flow in and out of mutual funds. 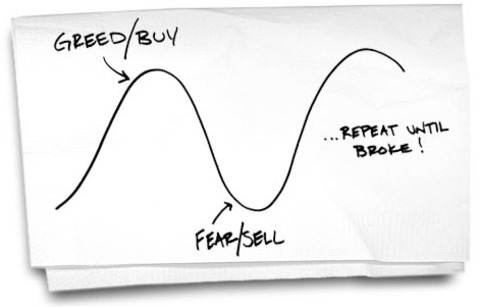 The dot-com market had reached a fevered pitch.

People were using their home equity to buy tech stocks right after the NASDAQ had a single year return of better than 80 percent!

Then, in January 2000, investors put close to $44 billion dollars into stock mutual funds, according to the Investment Company Institute, shattering the previous one-month record of $28.5 billion. We all know the story from there.

Money continued to pour into stock funds, breaking records for February and March and pushing the NASDAQ to 5,000, only to lose half its value by October 2002.

That same October (at the low for the cycle), as investors were selling stocks as fast as they could, where was all the money going? Into bond funds, at a time when bond prices were near record highs.

Think about this pattern for a minute.

At the top of the market we can’t buy fast enough.

About three years later at the bottom, we can’t sell fast enough.

And we repeat that over and over until we’re broke.

No wonder most people are unsatisfied with their investing experience.

Over the last year, investors have put an estimated $506 billion into mutual funds, but $409 billion of that went into bond funds.

No one is sure how this will turn out.

But with interest rates again near record lows (meaning bond prices are near record highs), you could end up losing money in that bond fund you bought for the purpose of making sure you don’t lose money.

To be clear, the solution here is not to sell your bond funds.

It is not to buy stock funds.

The point is to recognize that, in aggregate, investors tend to be very bad at timing the market.

It makes far more sense to ignore what the crowd is doing and base your investment decisions on what you need to reach your goals, then stick with the plan despite the fear or greed you may feel.

To do otherwise would be following a pattern that has proven to be extraordinarily painful.

This article originally appeared in The New York Times

'How Greed and Fear Kill Investment Returns' have no comments