CoreLogic data based on settled sales confirmed that over the 12 months to May 2017, only 4.8% of all houses nationally actually sold, highlighting just how little stock sells in a given 12 month period.

Across house sales over the past 12 months, Tasmania recorded the highest proportion of stock turning over with 5.6% of all houses in the state selling.

Conversely, Western Australia saw the lowest proportion of turnover with just 4.0% of all houses selling over the past year.

The current lower volume of housing stock turnover highlights why caution should be taken when interpreting median sale prices.

With such a small fraction of housing actually transacting over a given period, median prices can be biased.

Furthermore, median prices may not be reflective of the whole market.

When making a comparison between periods they may compare two very different bundles of housing types and quality.

It shows just how little has been transacted over the past year.”

“We know from a variety of property data sources that stock levels are steadily declining and a key reason why the affordability issue presents a bigger picture problem, particularly for Sydney and Melbourne.

When we have stock on market, it keeps the property market competitive and in balance.

Without stock we see less vibrancy and activity across the market and much more buyer competition taking place as opposed to activity between properties.

Ultimately, he said, “the knock-on effect damages the supply and demand chain.”

Lower housing turnover is being influenced by a variety of factors.

Additionally, high transactional costs, which are based on a percentage of the selling/purchasing price, have become a larger disincentive across those markets where values have shown a material rise.

Highlighted in the adjacent tables, it shows the five suburbs in each state which have seen the greatest turnover of houses over the past year.

Only those suburbs that have at least 500 houses have been included on the list.

Zuccoli in Darwin had the highest proportion of stock turning-over across the country with 38.5% of all houses in the suburb selling over the past year. 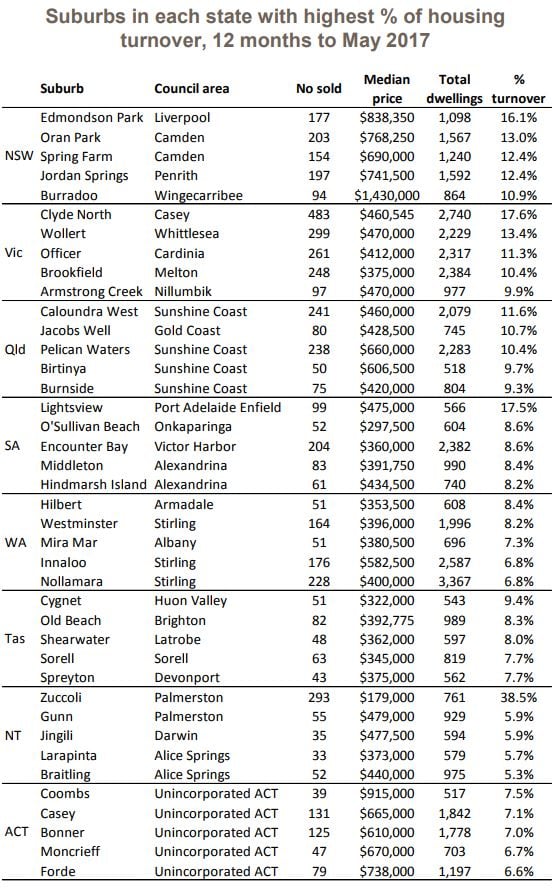 Clyde North in Melbourne had the second highest level of turnover with 17.6% of all houses in the suburb selling over the past year.

While the data shows the suburbs with the greatest turnover of houses, each of the suburbs listed have seen substantially less than half of all houses selling.

Another characteristic of note is that most of the suburbs shown are in areas where there is, or has been over recent years, a substantial injection of new housing stock; average hold period data which shows that in new housing estate areas housing stock tends to turnover with greater regularity.

Overall, housing turnover in any given year reflects only a small proportion of the total housing stock.

It further highlights that taxes on transactions such as stamp duty are heavily reliant on collection from only a small pool of overall housing stock.