ANZ Bank’s latest economic update explains their views on the direction of the economy, interest rates and property.

Their decision last week to lower the outlook for the cash rate to 1.5% by mid-2016 was partly driven by the expectation that housing activity will soon cool.

Forward indicators show that housing construction is either at, or close to, peaking and is set to stabilise (at best) over the next few years meaning the impetus to growth will wane.

As a result the bank thinks there will be a weakening in the ‘wealth effect’ that has provided some sustenance to consumer spending. 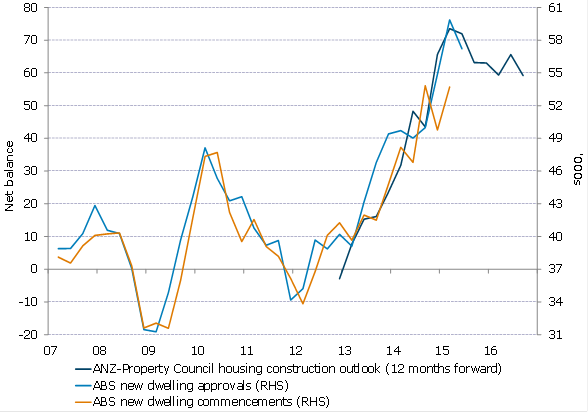 HOUSING HAS BEEN A KEY DRIVER OF GROWTH

Dwelling investment has increased by a cumulative 14% over the past two years, making it one of the strongest performing areas of expenditure in the Australian economy (albeit small at around 5% of output).

High levels of demand have resulted in dwelling approvals booming, particularly in the higher-density Sydney and Melbourne segments.

By contrast, total business investment has fallen 11.3%, and public investment 7.1%, over the same period.

Strong demand for housing has been underpinned by several factors.

But these drivers are set to unwind, with a number of indicators suggesting that housing construction is peaking now.

While dwelling approvals have remained high, there has been no further growth since the start of the year.

The ANZ-Property Council indicator of housing construction suggests the very optimistic outlook across the sector has also past its peak (Figure 1).

Recent data shows that investor borrowing is beginning to retreat. 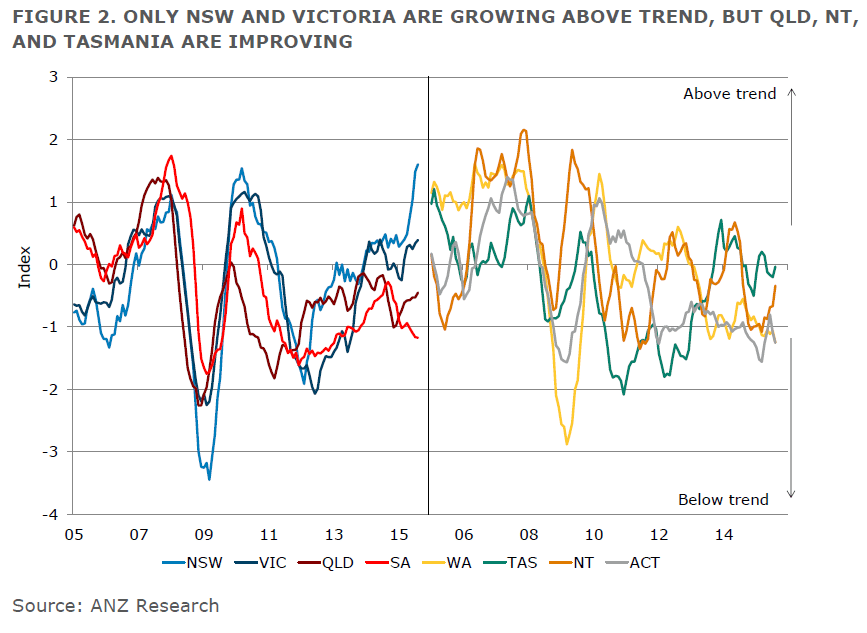 Australia’s population growth is also slowing and that too takes pressure off the demand for housing.

Net immigration has slowed as the Australian economy is no longer outperforming.

Population growth is now expected to settle around its longer term average of 1•••–1•••% y/y which will eventually slow the demand for housing.

We expect that the stimulatory effect of the falling AUD for foreign investors is also likely to wane once the currency stabilises, which in our view is likely towards mid-2016.

In addition, tighter controls on Chinese capital outflows will also weigh on the market if they persist.

House prices in renminbi terms have been little changed over the past five years and according to our forecasts will remain there (Figure 4).

This means there will be no new price incentive to attract foreign buyers but the relative price attractiveness of Australian residential property will remain.

'When the housing music stops…rates will fall' have no comments